Deviled eggs get a tasty upgrade with the addition of sweet-and-spicy candied bacon. They’re the perfect appetizer to bring to Easter or your next potluck brunch and are sure to be a hit! 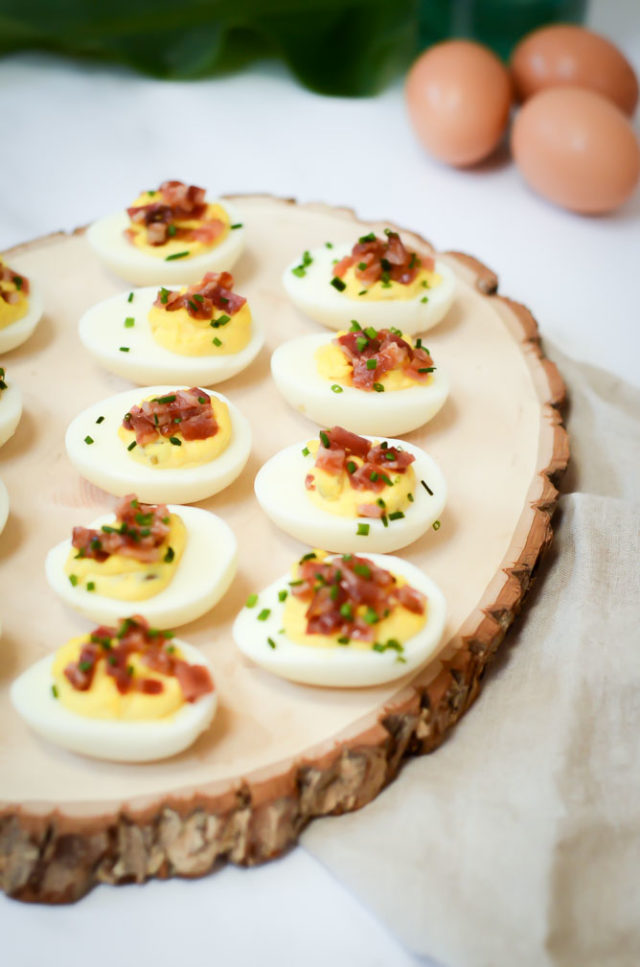 If you’re a fan of deviled eggs, you better fasten your seatbelt, because the classic springtime brunch appetizer just got a whole lot better. Yep, I’ve gone ahead and taken deviled eggs and upped the ante by sprinkling on the most delicious candied bacon, giving them the perfect hint of sweet, spicy AND crunchy. Let’s be honest, bacon makes everything better!

Deviled eggs are one of those dishes that can be a bit intimidating to make, but really shouldn’t be. Once you get the technique down, you’ll most definitely want to be serving these for more than just your annual Easter brunch. 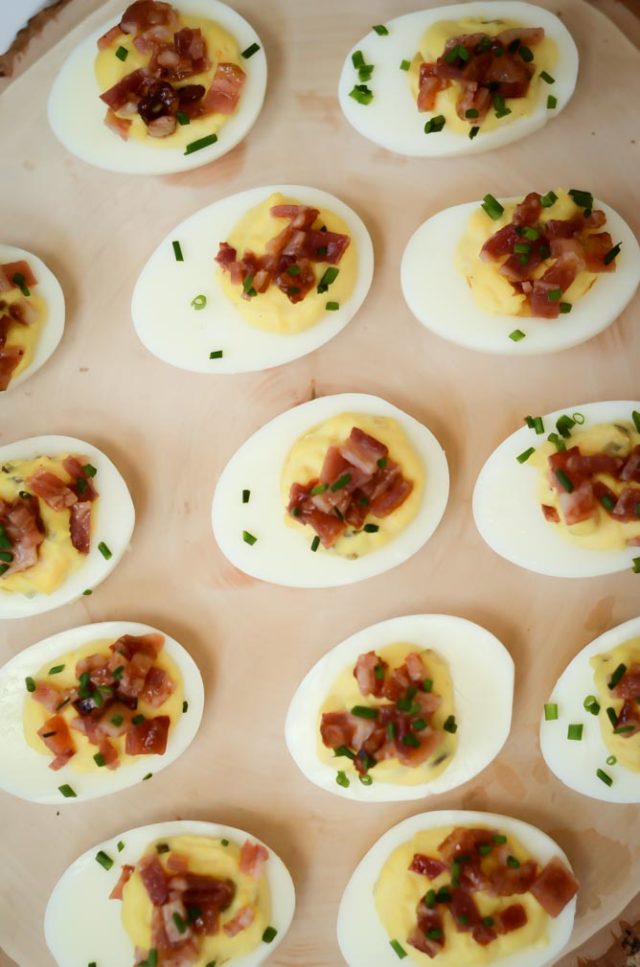 The first, and perhaps most intimidating, step is hard boiling your eggs. There are lots of different techniques out there, from using a steamer to breaking out the ever-so-popular Instant Pot, but I prefer to stick to the good old-fashioned way of boiling them in water.  It’s pretty darn foolproof and, after all, aren’t they called “hard-boiled eggs”? I’ve included my easy-peasy technique in the recipe directions below. You’ll never be intimidated to hard-boil eggs again!

While you’re waiting for your eggs to cool down (that ice water bath is so crucial for easy peeling), you can whip up the candied bacon, which couldn’t be easier. All it takes is two ingredients and another foolproof cooking method to take our favorite breakfast treat from standard fare to sweet-and-spicy candied treat. Even though you’ll only need three slices of the bacon for the eggs, in the recipe I’ve included amounts for a dozen slices (an entire standard pack of bacon) so you’ll have plenty to snack on on the side. You can thank me later!

Once the bacon is done and cooling, the next step is to make the filling. I’ve stuck to a VERY basic filling recipe (thanks, Mom!) but it’s for a reason, I promise. We want that sweet-and-spicy candied bacon to really shine through!

Now that the different components are all prepared, you’re ready to compose your deviled eggs. I prefer to use a piping bag for the filling, but you can also easily use a Ziploc with the tip cut off or even a spoon. There are no hard and fast rules about this.

Once you’re done with the filling, all that’s left to do is sprinkle on that oh-so-tasty candied bacon. See? I told you it was easy! 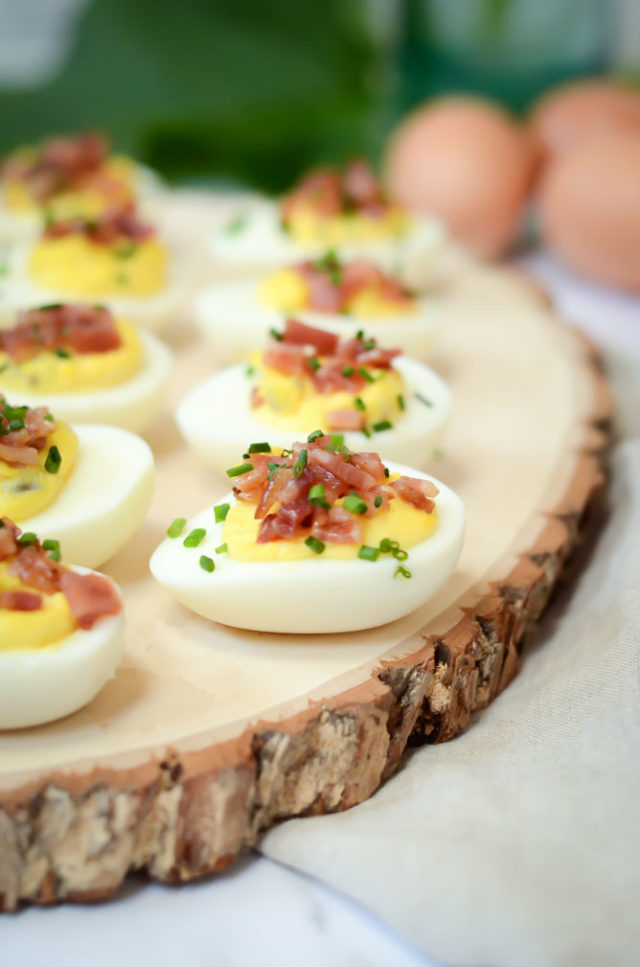 Well, I’m not going to sugar coat it (hehe, pun intended), but you’re probably not going to be able to wait until whatever function you’re bringing these to to give them a shot. So give them a taste (you might need to eat two so as not to give your taste test away with an odd number of eggs when you get to the function), and then artfully arrange them so it’s not obvious. These do keep for a while in the refrigerator, but I encourage consuming them within one to two days for that candied bacon to really pop. If you’re transporting them, be sure to keep them tightly packed in a single layer so they don’t roll around or flip over. 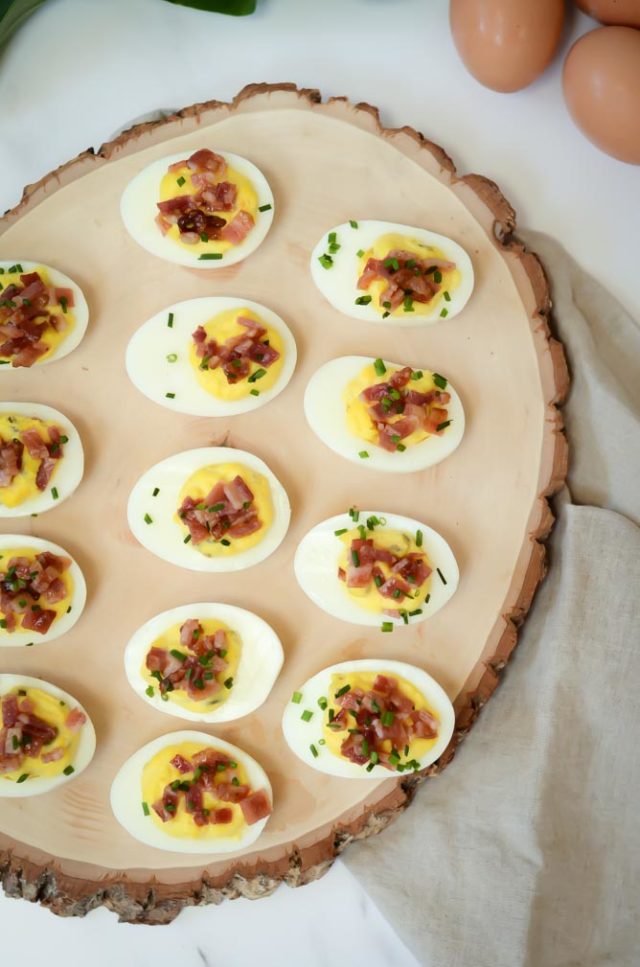 Well, what are you waiting for?? Hop to it and make some Candied Bacon Deviled Eggs ASAP! 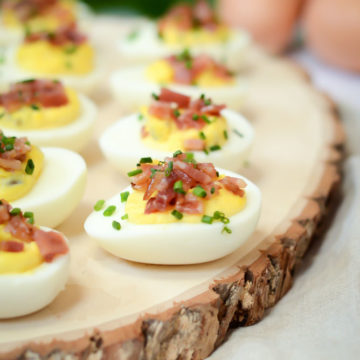 Deviled eggs get a tasty upgrade with the addition of sweet-and-spicy candied bacon. They’re the perfect appetizer to bring to Easter or your next potluck brunch and are sure to be a hit!
5 from 1 vote
Print Pin Rate
Course: Appetizer
Cuisine: American
Prep Time: 15 minutes
Cook Time: 30 minutes
Total Time: 45 minutes
Servings: 12 people
Calories: 35kcal
Author: CaliGirl Cooking