This Cheesy BBQ Garlic Bread is not your average garlic bread! This version is loaded with zesty BBQ sauce and smothered in melted cheese, the perfect BBQ side dish! 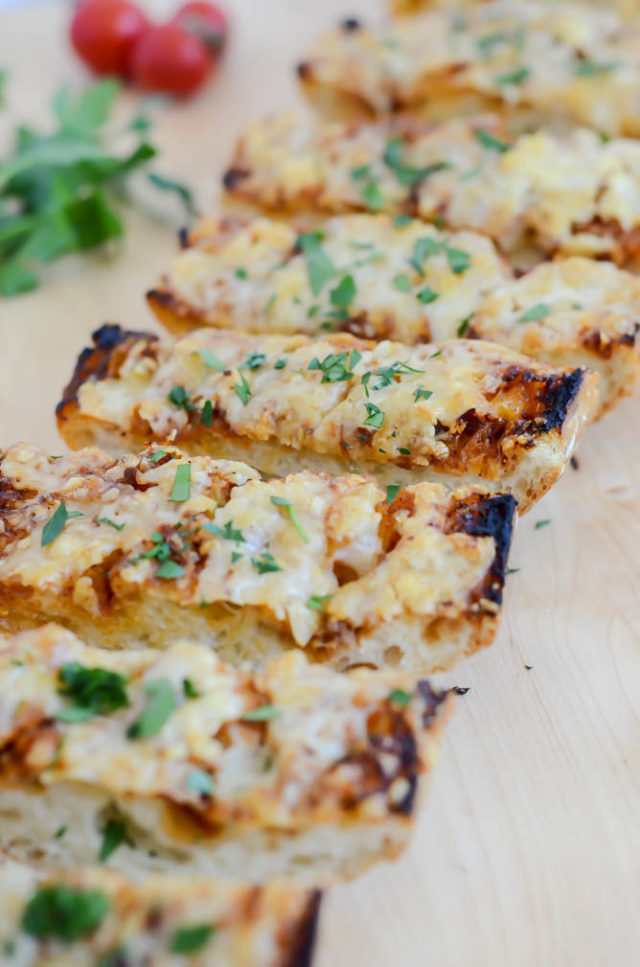 This cheesy goodness goes by no other name than (somewhat obvious): Cheesy BBQ Garlic Bread! I’ve been wanting to make this perfect cookout accompaniment for quite some time now, and I figured what better time to do so than for the holiday weekend that basically kicks off summer!

And I’m not stopping there. That’s right, this week I’ll be bringing you all kinds of fun BBQ-friendly dishes to get you loaded up with recipes before the hubs and I skip town and head up to Tahoe for a much needed getaway with a few of our close friends. My hubby’s birthday happens to be on Memorial Day this year so we thought, what better way to celebrate than at one of our favorite places with some of our favorite people? We’re keeping it fairly low-key, though, with a spa day penciled in and surely lots of time just relaxing around the house and catching up! I hear there may still even be snow there, which would be pretty cool.

Sorry, just a little digression, because what I’m really here to talk about is this Cheesy BBQ Garlic Bread. I’m very happy to report that it turned out just every bit as good as I had imagined. And it’s so easy! We’re talking about FIVE ingredients and FIVE minutes on a high heat grill (or under the broiler.) That’s it! 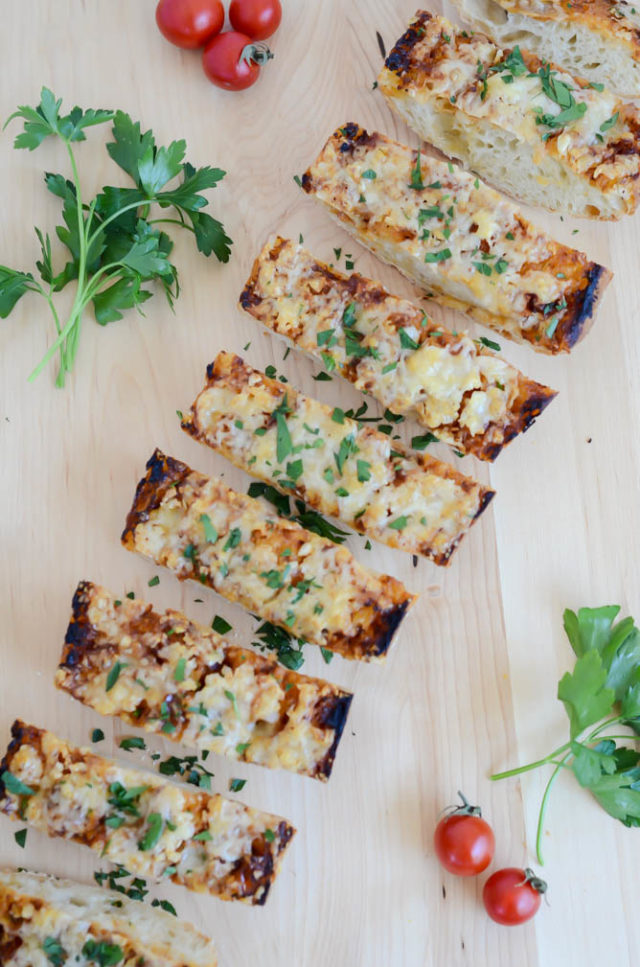 Of course, if you wanted to be really adventurous, you could whip up your own BBQ from scratch, but if your household is anything like ours, you probably have at least a bottle or two of your favorite premade stuff hanging around your pantry or refrigerator.

I was lucky to have some of the Sweet ‘n Spicy BBQ Sauce from Montana Mex on hand (thanks, Eduardo!) and decided to give it a spin for this recipe. If you haven’t heard of Montana Mex or Chef Eduardo Garcia, it’s about time you did. (Sorry, just another little digression and, no, this is not sponsored! I truly was just incredibly impressed by Eduardo’s story so I wanted to share it here.)

Every year, Chris and I are lucky enough to attend some of the Santa Barbara International Film Festival’s events through his company’s sponsorship connections. When we heard we’d be getting tickets to the opening film this year and what the film was about, I have to admit I was a LOT more excited than I had been for the films being screened in previous years.

Charged is a film about Chef Eduardo Garcia’s survival and inspiring recovery from being charged with 2400 volts of electricity while out hiking in the woods one afternoon. Although not for the faint of heart, the film is full of Eduardo’s unwavering positivity in the face of adversity and perseverance through some very challenging obstacles.

We were lucky enough to get to chat with him after the film, and I was honored when he offered to send me a box of his company’s products. Chef Eduardo founded Montana Mex after he became frustrated with so many of the Mexican food products available here in the United States that were laden with chemicals and preservatives. So he and his business partner set out to make a line of Mexican-inspired condiments without all of the gunky stuff. Which you know is right up my alley! 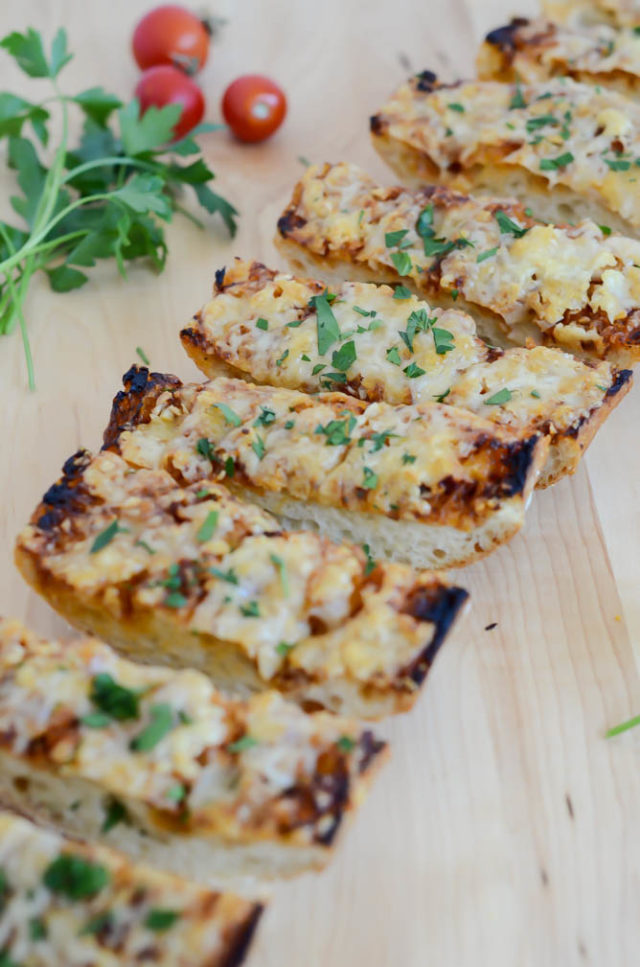 Charged won’t be released to the general public until September (at which time you most definitely need to go see it), but if you come across any film festivals that might be airing it before then, GO! If you like inspiring stories, survival and food, you will not be disappointed.

Eek, ok! Let’s get to this Cheesy BBQ Garlic Bread. Good thing it’s so easy to make because I have been rambling for far too long already and I’m sure we all have more important things to be doing on a Monday morning.

So here’s what we do: We start with a huge loaf of fresh, crusty bread. A pain rustique or ciabatta (something with lots of little air pockets in the dough) would be ideal here. We want lots of nooks and crannies for all of the butter, garlic and BBQ sauce to ooze into. 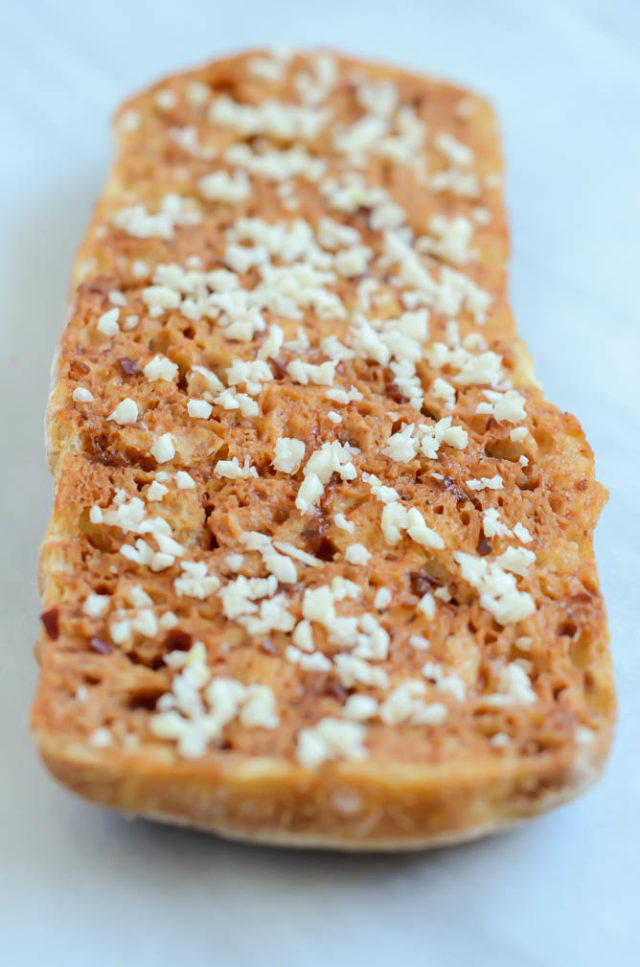 We slice the bread long-ways for maximum surface area, then start slathering on the good stuff – first butter, the BBQ sauce and garlic, then cheese. Because this BBQ garlic bread is CHEESY. 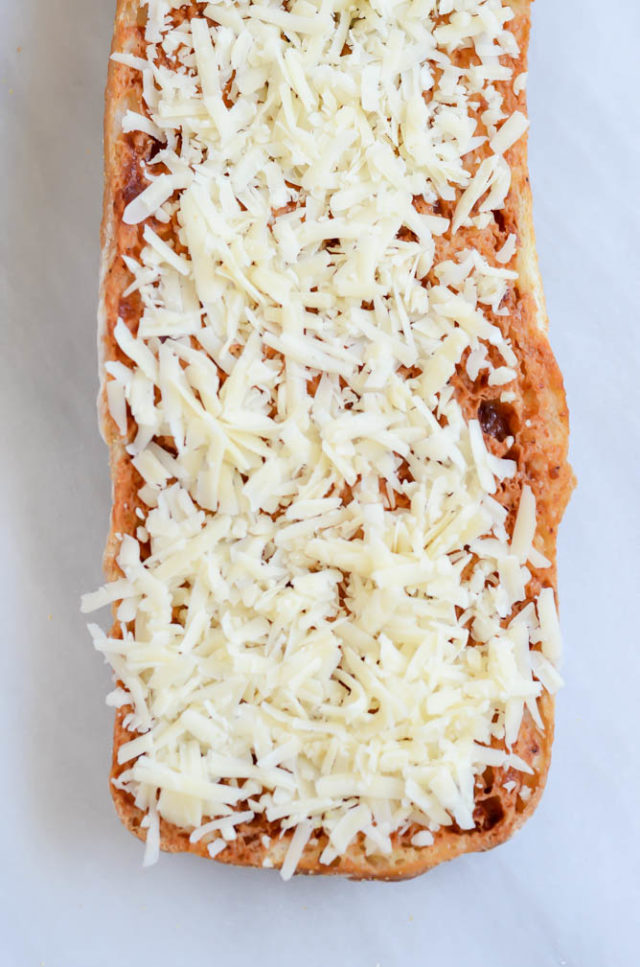 Throw the loaf halves onto the grill (if you have space to spare) or pop them under the broiler and you’ll have delicious Cheesy BBQ Garlic Bread in as little as five minutes. If that’s not the perfect cookout side dish, I don’t know what is! 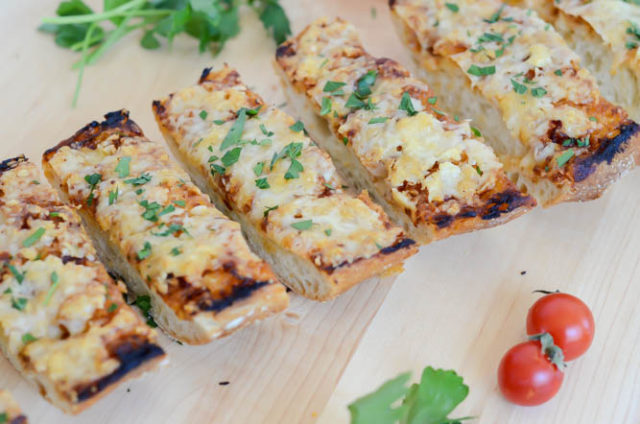 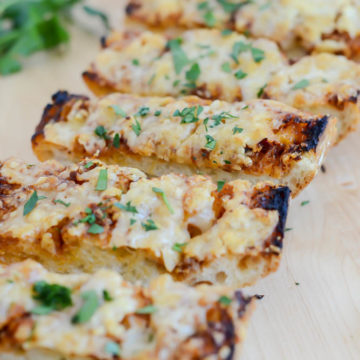 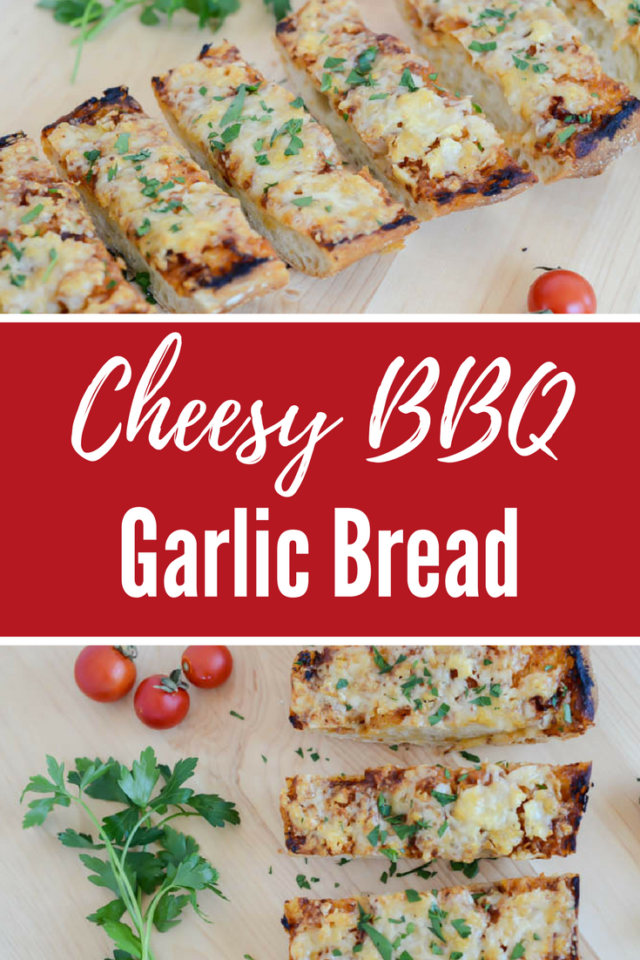