This Chocolate Brie Dessert Pizza with Almond-Orange Shortbread Crust is a fun, lighter option for a festive holiday dessert. The family will love it! 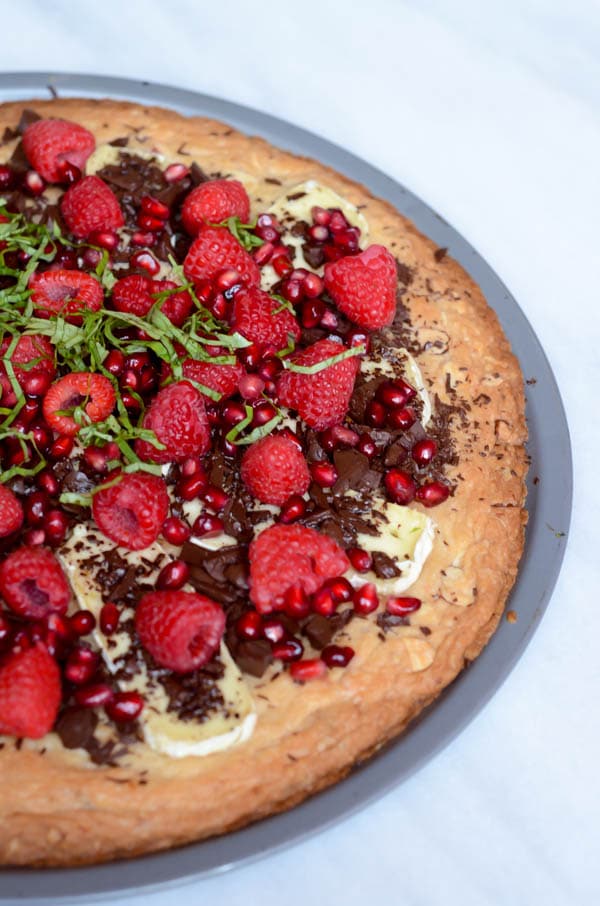 It’s finally here! The dessert I’ve been promising you. If you don’t remember (or aren’t following me on Instagram, which you should be!) I posted a “teaser” photo of this right around the holidays. I may have used some clever Emoji-ing (is that a word yet? If not, I’m sure it will be in the Urban Dictionary in no time) to hint at the fact that this recipe involved pizza, cheese, and a cookie. Weird, right? Did anyone have any idea that this is what I was talking about? If so, yay for you and you should definitely consider playing a game of Pictionary this weekend.

But I digress. I came up with this recipe idea after Tieghan over at Half Baked Harvest recommended dipping dark chocolate into her Honey Baked Brie (genius!) I have to admit I was curious and eager to give the pairing a try. 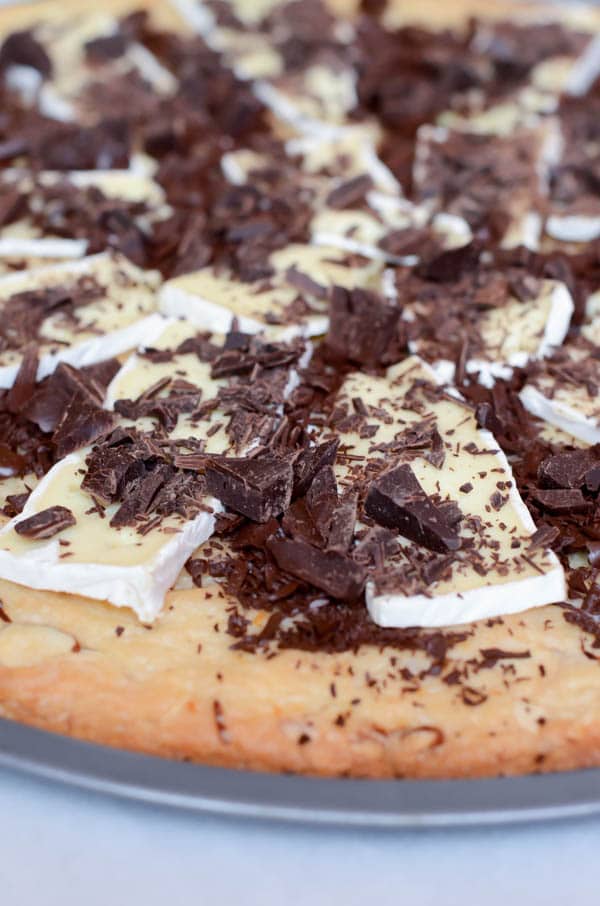 It just so happens that every Christmas Eve, I have the tradition of making a “dessert” pizza for my family to enjoy while merry-making, opening gifts, etc. Is everyone familiar with dessert pizzas? I’m sure if you live anywhere near a BJ’s Restaurant you are quite familiar with the Pizookie! Which is basically the ultimate dessert pizza: a hot, deep dish cookie (your choice of flavor), served in a cast iron skillet and topped with ice cream. 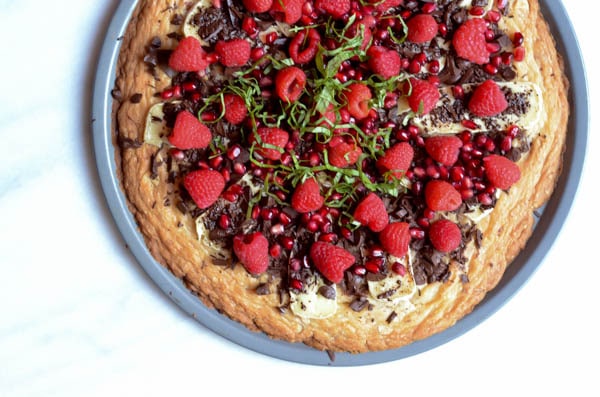 Now, I don’t get quite that fancy here (as far as serving style, at least) but let me tell you this perfect combination of flavors certainly makes up for it. For me, another classic pairing with brie is orange and almond (I’ve been known to top some baked brie with Frangelico which, BTW, is amazing and you should totally try it) so I wanted to figure out a way to serve it altogether. I started thinking about my crust, which in the past has been a classic sugar cookie crust (maybe once or twice from the dough that comes in those pop-open cardboard cans, but I’ve graduated from that now.) I figured shortbread would be the next best thing (or better) than sugar cookie, so I did some Googling and found this delicious Almond-Orange Shortbread recipe from Martha Stewart.

The first time I made this dessert pizza, I followed Martha’s shortbread recipe to a T. The second time I made it (partly because I was lazy and didn’t want to go to the store and partly because I was curious) I subbed in Amaretto for the almond extract. Let me just tell you, it was amazing. As you’ll see in the adapted recipe below, I also modified the refrigeration/freezing process so the dough would work better in pizza form.

So, this dessert pizza. We make the dough (which does take a little bit of time to set up in the refrigerator, so plan ahead) and then we roll it out onto a good ol’ pizza pan. We then bake it for a bit, just until it starts to get set and golden on us, but not until it’s completely cooked. 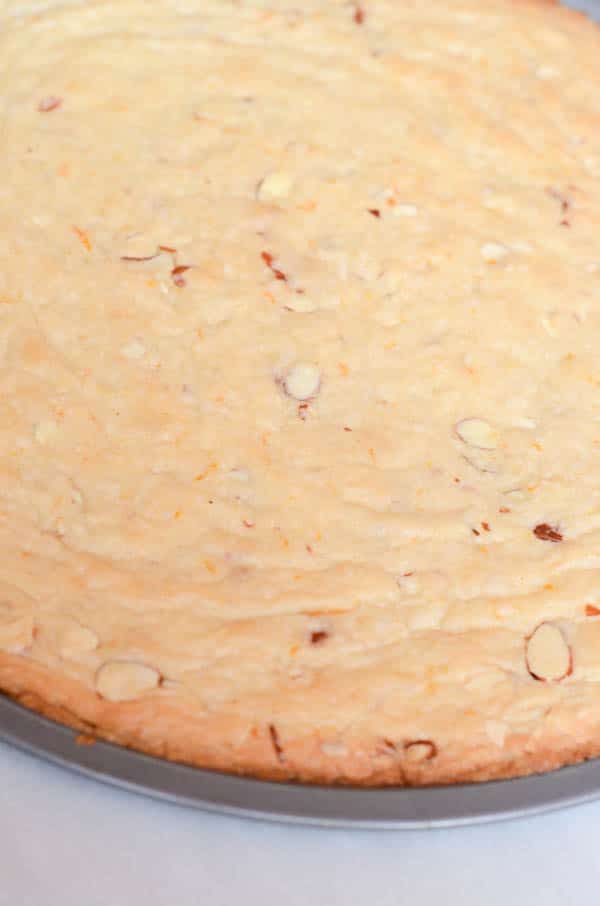 We pull it out of the oven and lovingly adorn it with sliced brie and chopped dark chocolate, then pop it back in to get that brie and chocolate all ooey-gooey, melty and delicious. Once we pull it out again, we pile on some fresh fruit – I went with pomegranate seeds and raspberries because they were in season (and looked delicious!) but you can really use whatever tickles your fancy here. And, if we want to really add a final flourish, we throw on some basil for another touch of color and one more little pop of unexpected flavor. 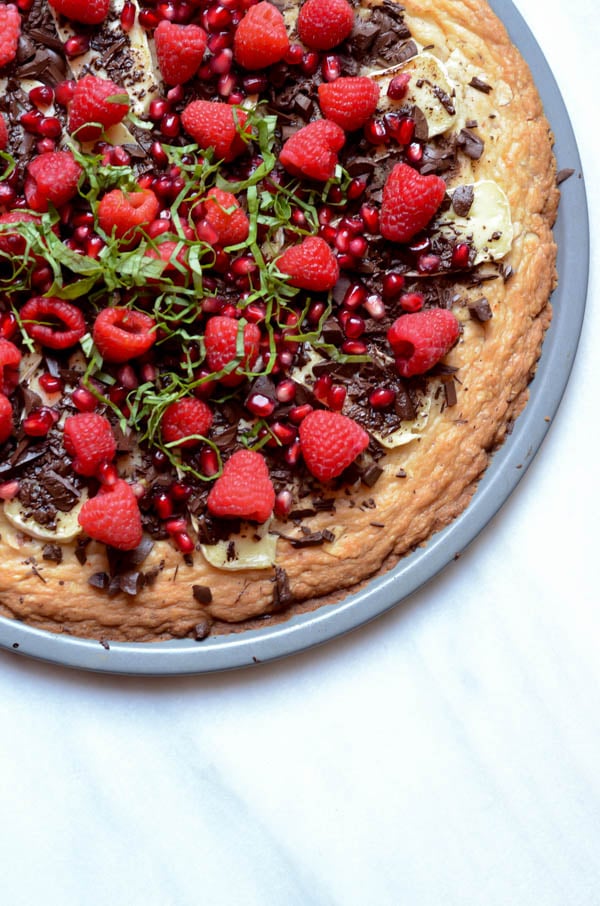 Now, I know it’s not Christmas anymore, but judging by how quickly this dessert pizza was eaten up by all of my coworkers (and their pressure on me to post this recipe), I think you’ll be just fine making Chocolate-Brie Dessert Pizza for any type of upcoming event or celebration. And it has fruit, so it’s healthy, right? 😉

Enjoy your weekend friends! And be sure to follow me on Instagram to see all of the fun times we’re about to have visiting our dear friends in Livermore! 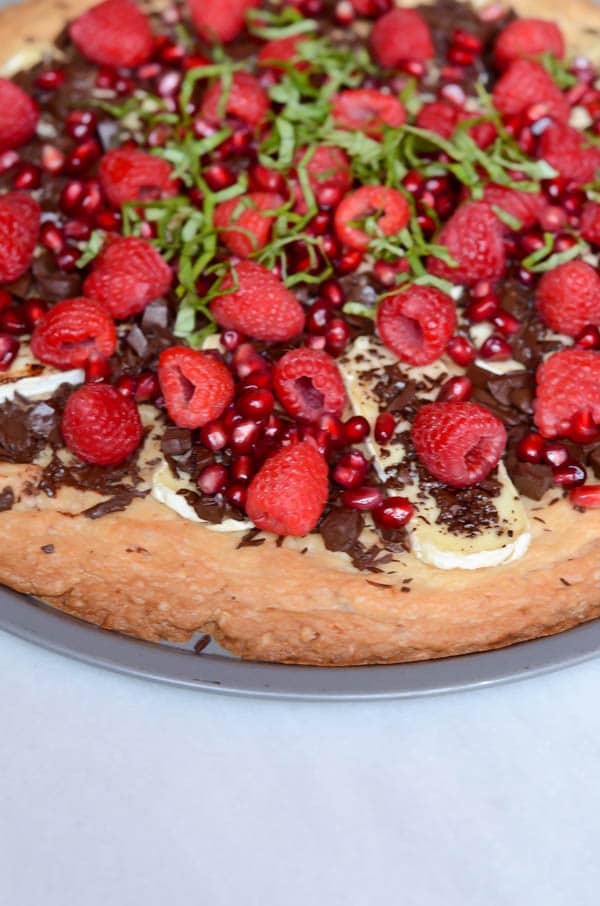 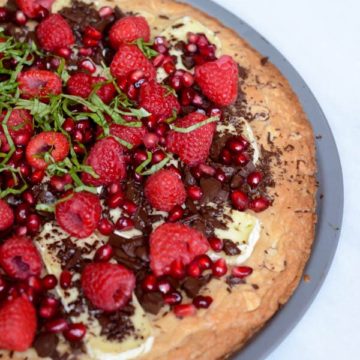 For the shortbread crust (adapted from Martha Stewart):

For the pizza toppings:

Wine Pairing Notes: I’m not usually one to pair wine with dessert, but this one just screams for a White Port. My absolute favorite is the Aria White Port from Prager Portworks which, by the way you should absolutely go visit their tasting room if you are ever in Napa. The lightness of this particular port is the perfect match for the orange and almond flavors, as well as the brie, yet it’s hearty enough to not get overwhelmed by the dark chocolate. A match made in heaven if you ask me! 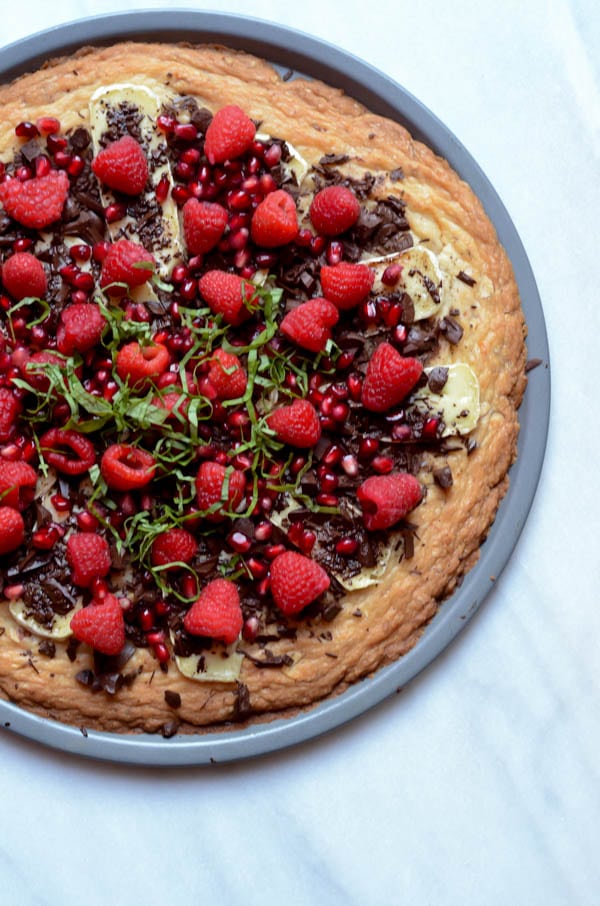