This New York-Style Cheesecake is a classic recipe for the creamy, decadent dessert with subtle hints of vanilla and lemon. 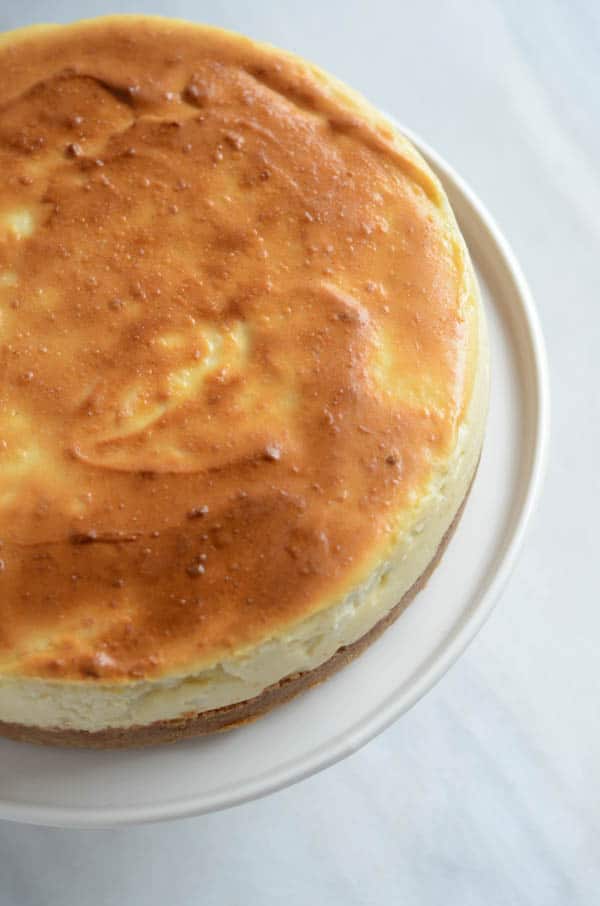 Birthdays are strange. Some years, they fall into place with celebrations that seem to go on for weeks. Others, you feel the urge to just take it easy, not make a huge deal out of it, and spend quality time with the ones you love. Sometimes, all you need is cheesecake.

Yesterday was Chris’ 30th birthday. I’d been asking him what he wanted to do for months, but hadn’t been able to get a solid answer out of him. Usually, I’d be the type of person to put something together anyhow, reach into my event planner background and make something happen. But you see, this here life has gotten me a little crazy for the time being, and between running the blog, working full time, and planning a wedding, I just didn’t have the mental capacity to get creative and think of something on my own. And I told him so.

He knows that I love him deeply, that I would do anything for him, but he also understands everything that I am trying to do right now and supports me 100%. He knows I’m stretched just a bit thin right now. He’s such an easy-going person, and although I know he would have loved to have gotten together with all of his friends this weekend, near and far, I knew he’d also be pretty darn content just relaxing and enjoying a few days off with me. We weren’t able to coordinate getting a big group together, and we couldn’t bring ourselves to spend a ton of money on concert tickets or a big trip with this thing called a wedding looming before us.

But that’s the thing about knowing you’ve found the right person, that you’re about to share the rest of your life with this one human being…You don’t NEED all of that. Yes, it’s a bonus, but at the end of the day, this is the person you are going to have by your side through the good times and the bad, the person that supports you through everything and loves you unconditionally. So you’re perfectly content spending your big 3-0 with just your person by your side, enjoying each others’ company. Oh, and cheesecake, did I mention there was cheesecake? 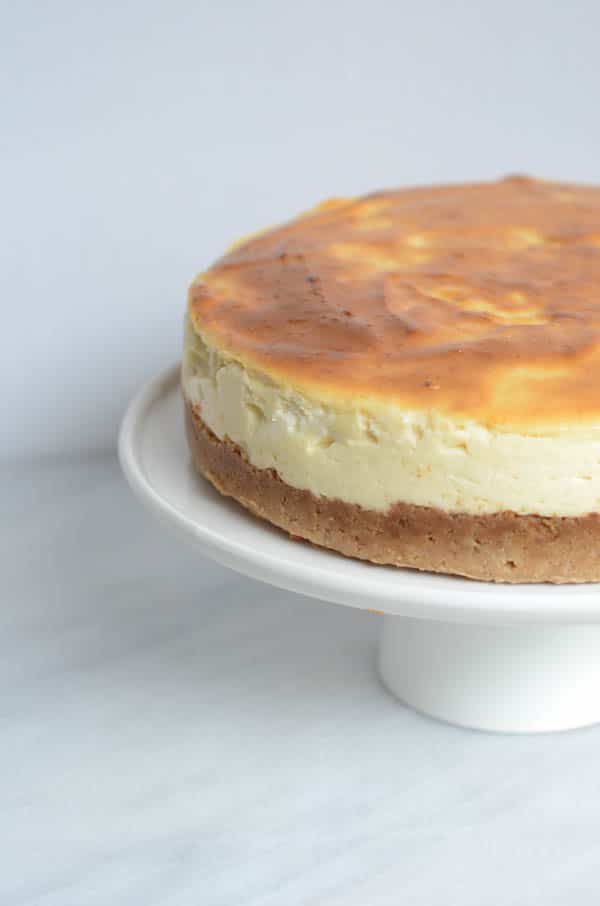 Cheesecake is Chris’ FAVORITE dessert, and from the moment I started asking him what he wanted for his birthday (to do, eat or otherwise), the only solid answer I got out of him was that he wanted cheesecake. Not a fancy, flavored cheesecake (as my creative culinary aspirations would typically lead me to whip up) but a classic, standard, New York-style cheesecake.

I’ve made cheesecake in some form or other before, but never one big, classic cheesecake. I was a bit intimidated but ready to do anything to get my man what he wanted for his birthday. Remember that thing I mentioned back in this post about getting into the kitchen and trying new things? You gotta do it! Trust me, it never turns out to be as intimidating as it seems. 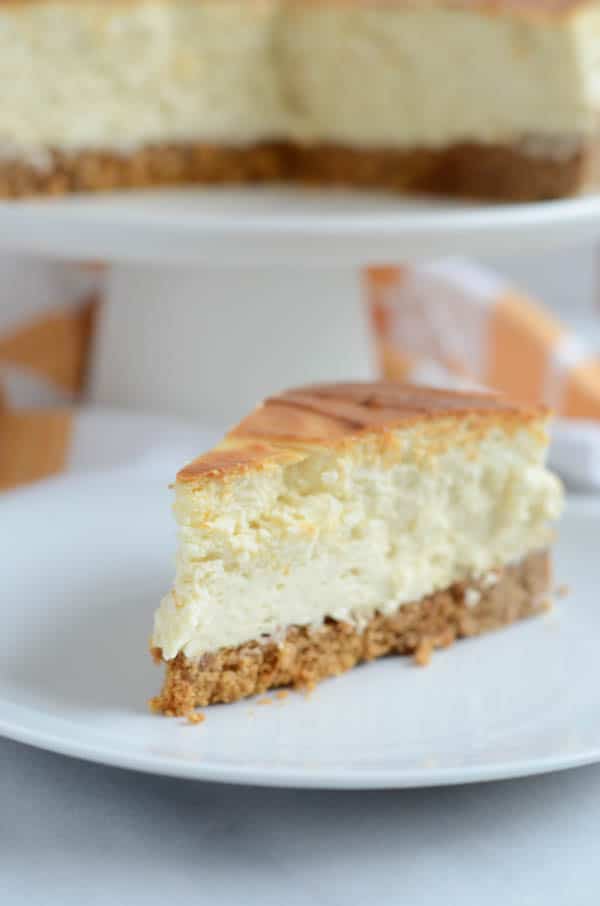 So, back to this cheesecake, I did some research and was eventually able to come up with what I thought would make a pretty darn good Classic New York-Style Cheesecake. Now, we all know that cheesecake is not THE healthiest dessert in the book (okay, it’s probably one of the least healthy!) but we also know I’m all about that balance and, if my man wants cheesecake, my man gets cheesecake. I may have thrown in a couple of minor tweaks to help myself not feel so bad about the calorie count, but the thing about balanced living (and eating) is we know we’ll make up for it with healthier dishes the rest of the time, like kale salads and minestrone soup!

As I mentioned before, this recipe may seem intimidating, but if you break it down it’s actually pretty darn easy, and the end result is so worth it! We start with a graham cracker crust that we pre-bake just a little bit to make sure it’s not too soggy once we add the cheesecake filling. We then make our cheesecake filling, sneaking in one package of “light” cream cheese (amongst the four packages the recipe calls for – insert monkey covering eyes emoji here) and we also use light sour cream instead of regular. Aren’t we feeling better already?

The trickiest part of this recipe is the way the cake pan is prepared and how the cheesecake is cooked. We use a springform pan, for ease of removing the cheesecake once it’s done. We then wrap the bottom of the pan in aluminum foil, and place the unbaked cheesecake (once ready to go into the oven) in a water bath. This helps create a steam bath of sorts that enables the cheesecake filling to cook all the way without burning too much. 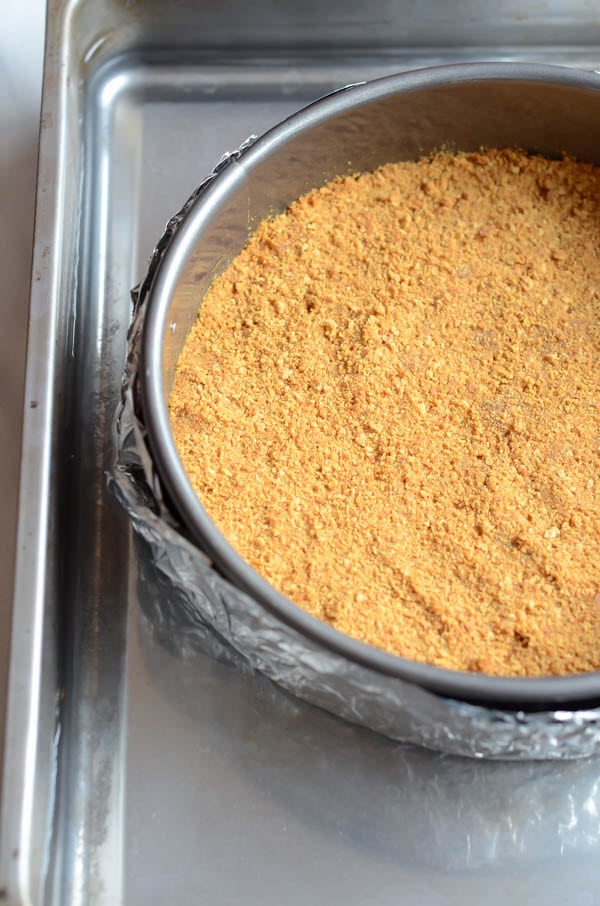 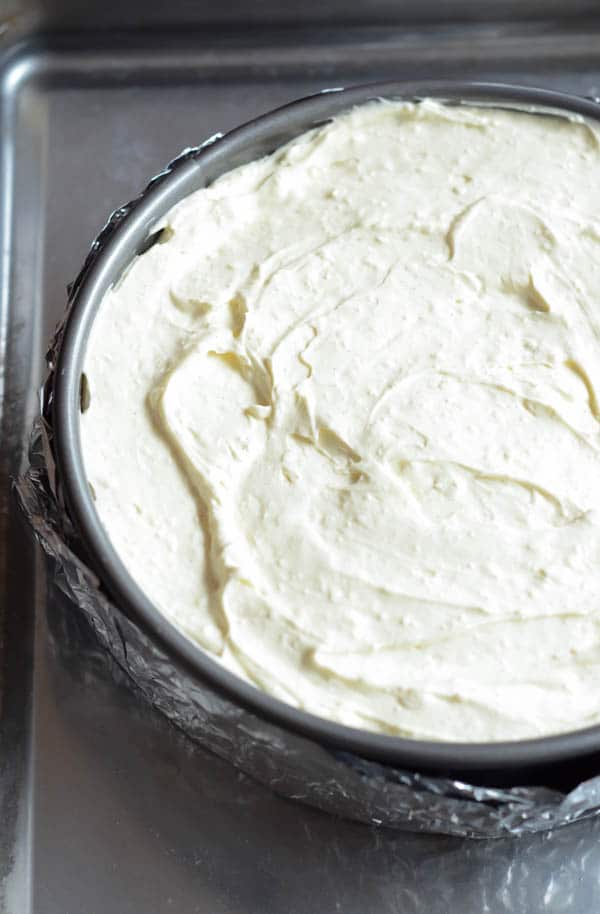 There is a bit of prep time, so you’ll want to plan in advance when making this. The cheesecake itself takes over an hour to bake, and then you have to let it cool all the way BEFORE placing it in the refrigerator to set overnight. So, as long as you’re cool with waiting and have a couple of days before you’re ready to actually eat the cheesecake, this recipe will be a snap for you.

This Classic New York-Style Cheesecake is dense, rich, moist and incredibly delicious. It’s creamy, with hints of vanilla and lemon zest. You don’t need much to feel satisfied, which means you won’t be left with a heavy, uncomfortable gut and you can still carry on with your (healthier) day-to-day eating. It’s a special occasion cake for sure, but that’s what birthdays are for! 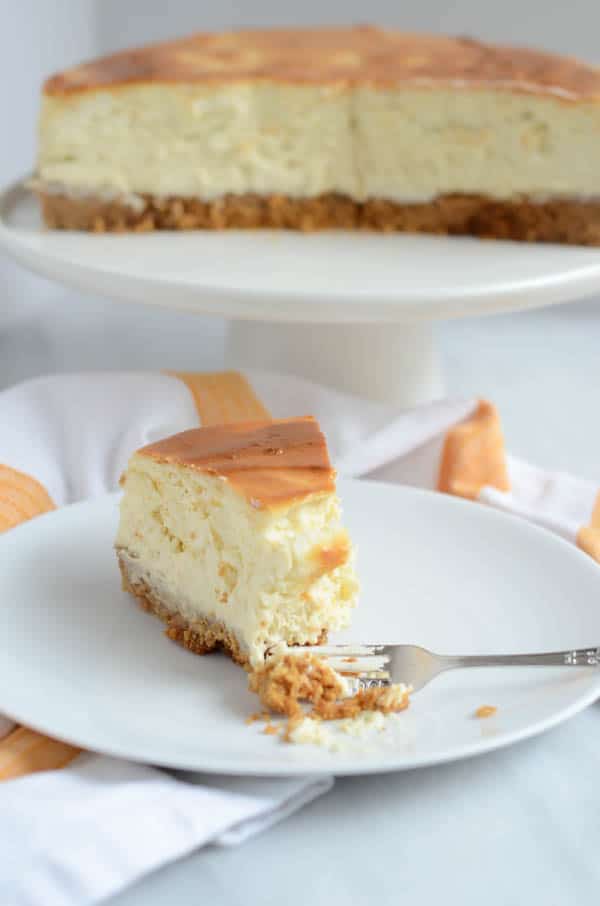 I love hearing about how others celebrate their birthdays (nothing like living vicariously through all of you!) What are the birthday dessert traditions in your family? What is your one special request when your birthday rolls around? Let me know in the comments below! 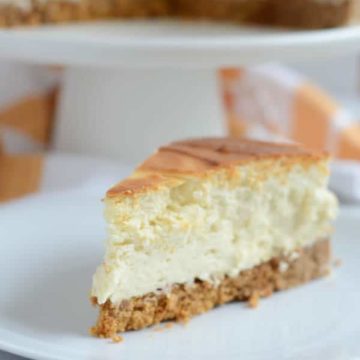 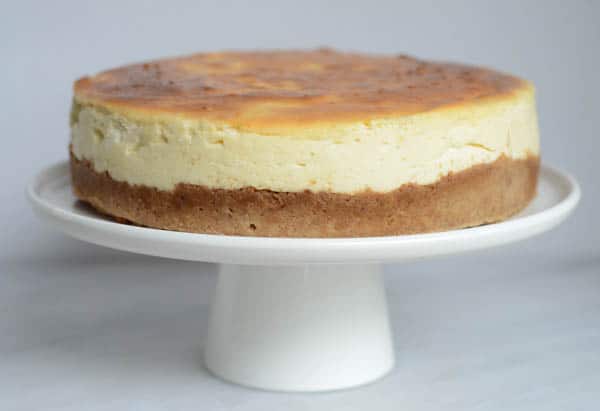