Vanilla-laced homemade marshmallows are covered in a soft yet chewy caramel to make the perfect sweet treat for the holidays and beyond! 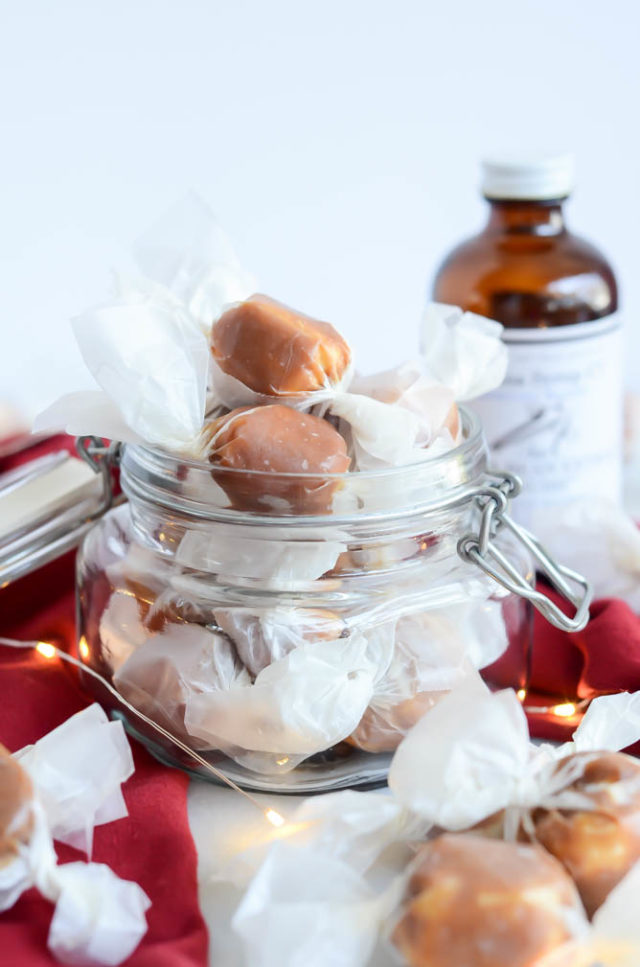 I can guarantee you won’t be able to eat just one. If you’re at all familiar with a certain popular candy store’s holiday offerings, these little nuggets of heaven I’ve dubbed “Homemade Caramel Covered Marshmallow Kisses” likely look like something you’ve seen before gracing their shelves before. If not, then prepare to be wowed by a delicious homemade holiday goodie that will put your standard cookie and fudge platters to shame. You’ve been warned.

I generally claim to have no preference between cooking and baking (yes, I’m one of those rare birds), but when the holidays roll around, all I want to do is bake up tasty treats and goodies. I’m a sucker for everything from cookies to coffee cakes, and would happily give up candy bars in exchange for baked goods any day of the week. 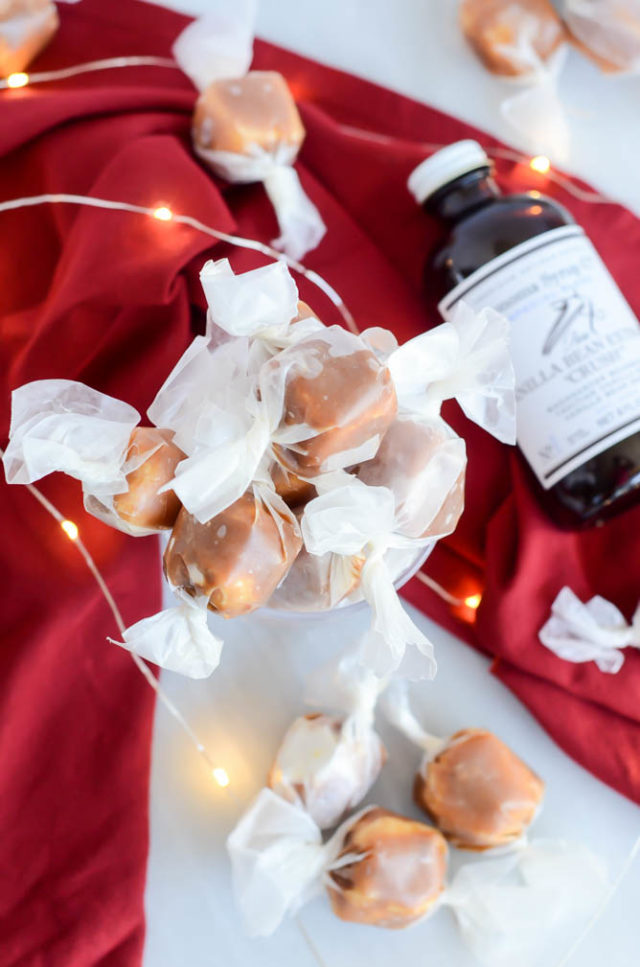 That’s why I’m so lucky to have partnered with Sonoma Syrup Co. this holiday season to create some super tasty treats using their syrups, extracts, etc. I kicked off the fall season with these Pomegranate Soda Ice Cream Floats, then took advantage of my pumpkin obsession by whipping up this Pumpkin Spice Coffee Cake with Amaretti Crumble. For the month of December, I wanted to showcase their super-fragrant and fresh Pure Vanilla Bean Extract “Crush,” and what better way to do so than with some Homemade Caramel Covered Marshmallow Kisses?

To be honest, this was also somewhat of a self-challenge on my part. You see, homemade marshmallows (and heck, even homemade caramel) have been on my list of “Things That Intimidate Me” for quite some time now. But heck, that’s one of the reasons I started this blog, to not only challenge myself with new projects in the kitchen but also encourage you, my dear readers, to challenge YOURSELVES with cooking adventures that may have previously been holding you back.

Sure, homemade marshmallows require some special ingredients like silver gelatin sheets and acetate (thank goodness for Amazon Prime!) and a careful eye on the stovetop, but when you break things down they’re really not that complicated…and so much tastier than the store-bought stuff! And who better to turn to than the man Thomas Keller for guidance? I referred to his Bouchon Bakery marshmallow recipe for this first little foray into the ‘mallow world, and as usual was thankful for his overly detailed instructions and step-by-step guide. 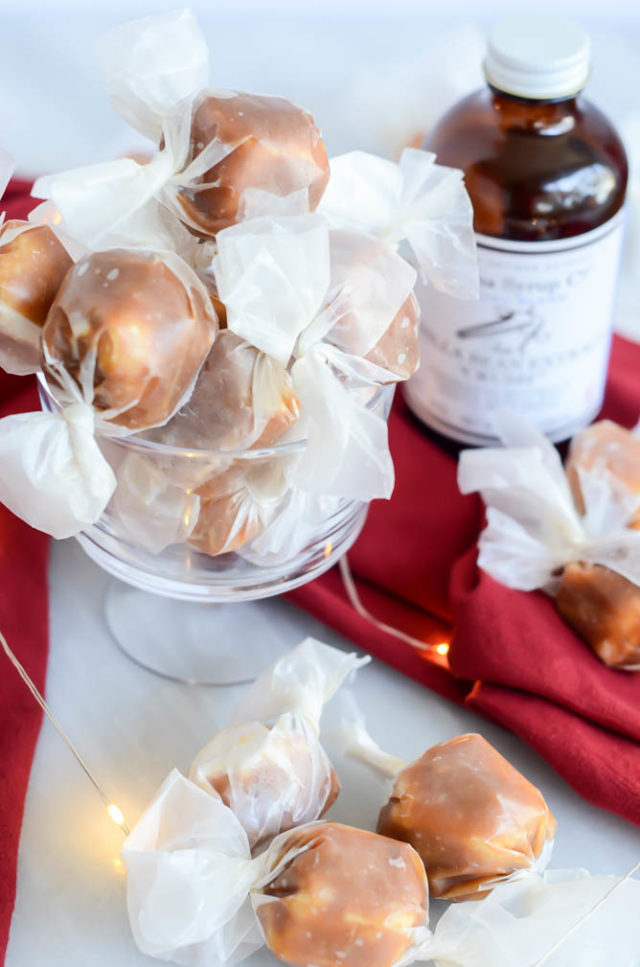 To give the marshmallows an extra-special hit of flavor, I turned to the aforementioned Sonoma Syrup Co. Pure Vanilla Bean Extract “Crush”. I tell ya, it’s amazing what just a little dash of this stuff brings to the table when dressing up a holiday goodie! I’m not even exaggerating when I say you can easily tell that they use only the highest quality Madagascar and Tahitian vanilla as the ingredients. It puts any other mass-produced vanilla extract to shame!

So, after we have the marshmallows made and chilled (carefully following the instructions – I promise it’s not too hard!) we make our super-simple caramel coating. And when I say super simple, I mean super simple – we’re talking just two ingredients and a saucepan away from having a huge batch of Homemade Caramel Covered Marshmallow Kisses ready for all your holiday gift-giving needs. Simply melt together some store-bought caramels with a little bit of heavy cream, let it cool slightly, and you’re ready to dip!

It’s important that you start with the marshmallows frozen so that they don’t melt into a gloppy puddle as soon as you dip them into the warm caramel. It’s equally as important to use parchment paper rather than wax paper when letting your caramel-dipped marshmallows set in the refrigerator and for wrapping them once they are ready to go (I learned this the hard way!)

I know this may all sound intimidating and time-consuming, but I promise, promise, PROMISE these Homemade Caramel Covered Marshmallow Kisses are well worth the little extra TLC they require. I also pinky promise that throwing a handful of these on any cookie or treat platter you happen to be bringing over to a friend or neighbor this season will be very well-received. Don’t be surprised if you leave them asking for more! 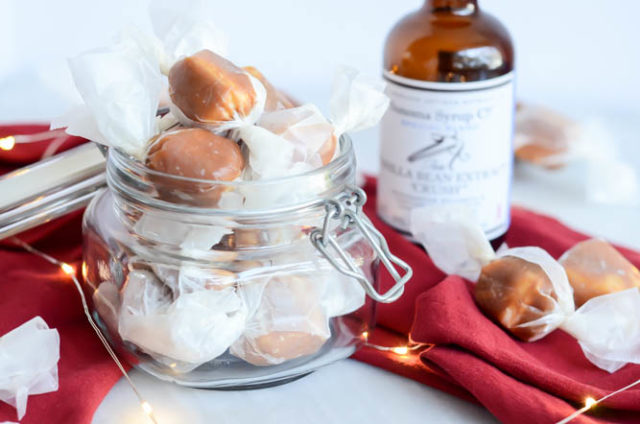 You can find the recipe below, and head on over to Sonoma Syrup Co. to order their Pure Vanilla Bean Extract “Crush” ASAP for all of your holiday baking needs! 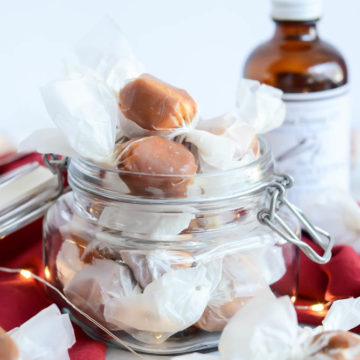 For the vanilla marshmallows*:

For the caramel coating: