This Kimchi Bacon Guacamole is a Korean-inspired guacamole featuring fresh kimchi to give some subtle spice and bacon as a secret salty ingredient. It’s bursting with flavor! 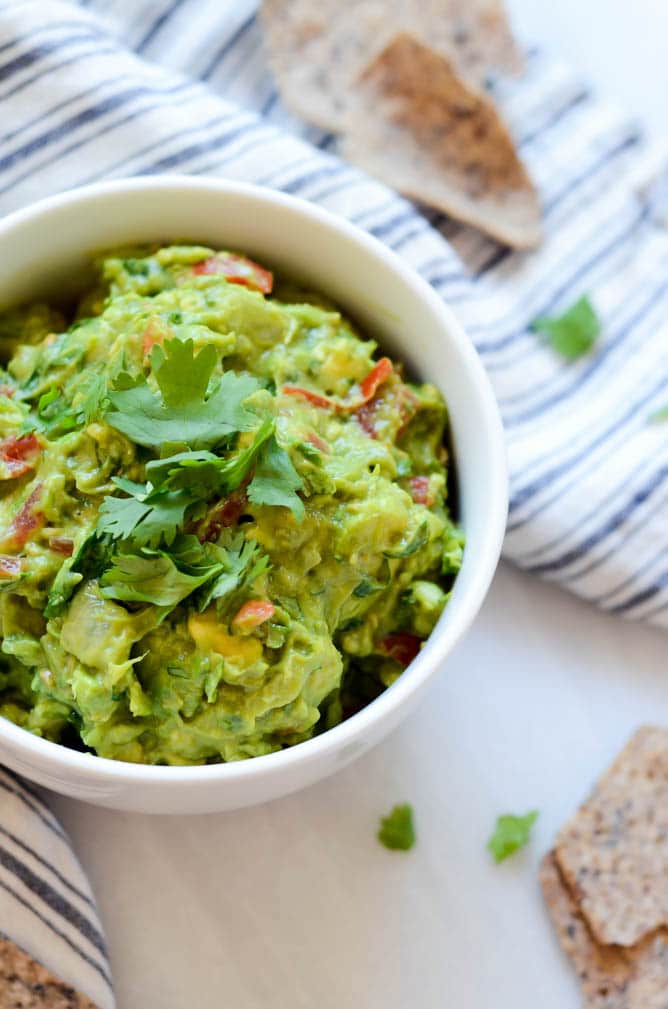 Quick, easy, salty and spicy. That’s how I roll these days.

It’s been quite the week and I feel like I’ve been going non-stop. I never realized how much “stuff” there is to do around the house (especially as a party of one) and it seems like I’ve not been able to stop, sit and relax in, oh, about 6.5 days. It’s times like these that I turn to quick and easy deliciousness that I know is going to make my tastebuds (and stomach) sing with joy. Enter Kimchi Bacon Guacamole!

Okay, but seriously, I think it was about Wednesday last week when I realized that FOOTBALL SEASON KICKED OFF LAST SUNDAY! It’s one of my favorite times of the year, mostly because Football Sunday is a food-centric event where you get to sit on your bum and eat all the things and drink beer (or bubbles, which happen to be my preference, keepin’ it classy.) So, naturally, I immediately started thinking about what recipe I could whip up that my gimpy husband and I could sit and enjoy while watching the Niners take on the Texans. Guacamole seemed like a natural selection (and a healthy one too!) 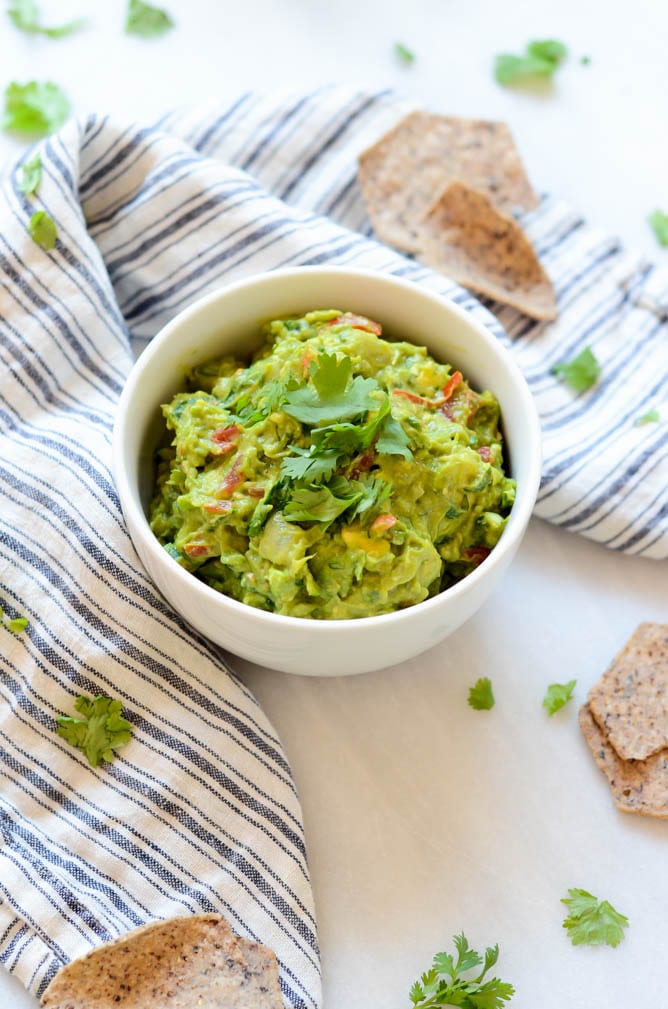 But, being the food blogger that I am, I couldn’t settle with just plain ol’ guac. I wanted to jazz it up a bit. You already know that I’m a fan of kimchi (a.k.a Korean pickled cabbage for all you newbies) and I figured it had been a hot minute since I’d made some. I love this recipe that I found on Food & Wine because it comes pretty dang close to legit Korean kimchi, but in half the time! Seriously, you should give it a try. Anywho, I decided to whip up a batch and then throw some in to my guac.

And, it being the weekend and all, I just happened to have a little extra thick cut slab bacon on hand…Now, we can’t let that go to waste, can we? I thought it would be the perfect salty addition to the pickled, spiciness that the kimchi lent to the recipe and, what do you know? Kimchi Bacon Guacamole was born. 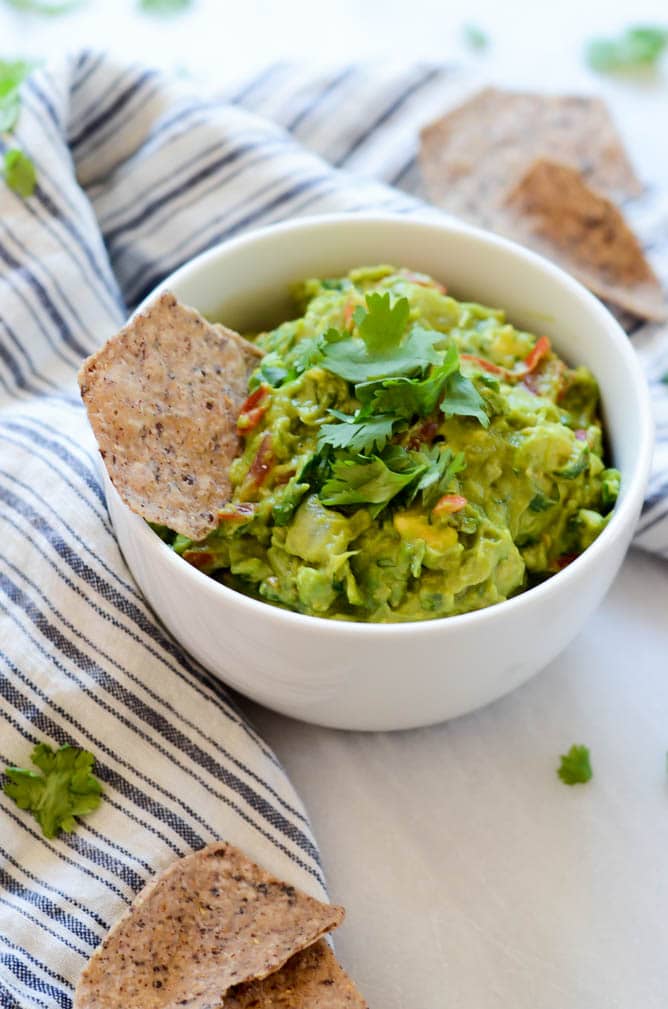 GUYS. Let’s be serious for a minute. This –ish is soooo frickin’ good! Like, why haven’t I thought of this before? I could choose to blame the fact that I hardly ever bought avocados when I lived in Hawaii because they were so dang expensive, but really, I can easily get a hold of (or make my own) kimchi now that I’m back on the mainland, so I should have at least figured this out 6 years ago when I moved back.

But the past is the past and there’s no turning back. All that matters now is that I have this magical creation called Kimchi Bacon Guacamole at my fingertips and today, you lucky readers, I’m sharing the recipe with you!

It’s hardly a hard-core recipe, so you have no excuse not to make this ASAP (or next weekend when NFL preseason continues…and might I mention it would also be an amazing Olympics-watching snack?) 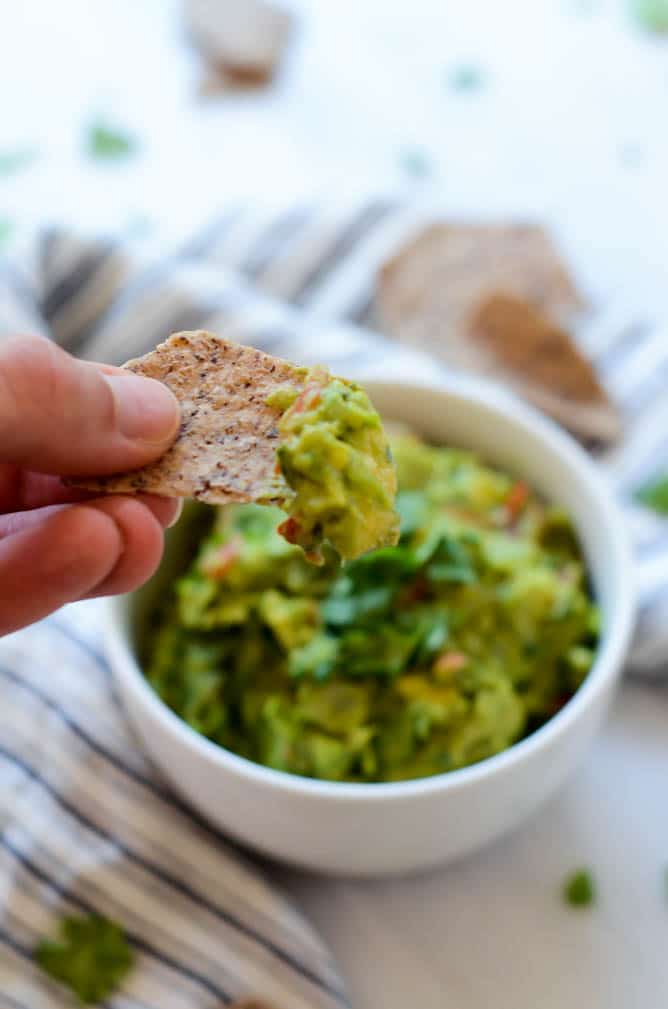 Here’s the deal: My favorite kimchi recipe from Food & Wine comes together in about an hour (maybe slightly more than that, but that’s still amaze-balls compared to most other kimchi recipes), and the rest comes together in less than 15 minutes! (If you have some leftover cooked bacon on hand…But if you’re veg, you can totally leave it out and this guacamole will still be soooo good.)

We make a traditional guacamole (with garlic, cilantro, tomato, jalapeno, and of course avocado) and then simply chop up our fancy additions (bacon and kimchi) and mix it all together. Easy as that! Now what do you say, are you ready for some Kimchi Bacon Guacamole in your life? 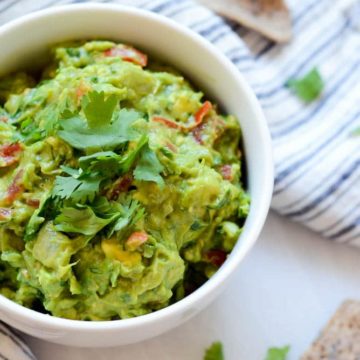