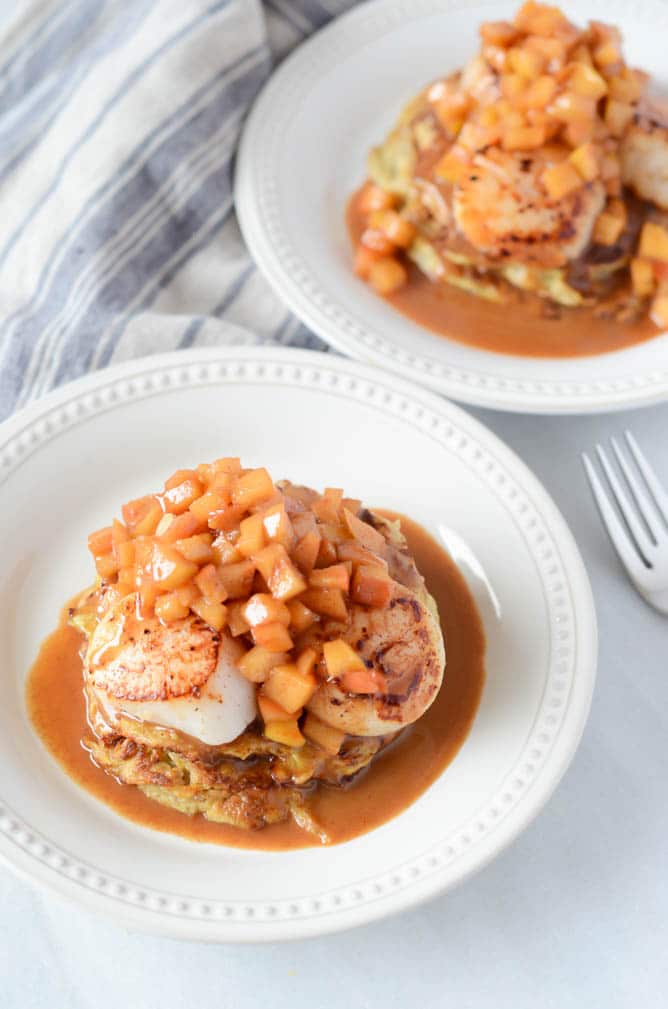 The warm and cozy fall dinner ideas just keep on comin’, and these Spiced Spaghetti Squash Pancakes with Seared Scallops and Apple Brandy Sauce (say that ten times fast) are right there at the top of my list of favorites. They’re intricate and comforting at the same time, with the perfect balance of fall flavors. They’re also fairly healthy and completely attainable on a weeknight.

That’s right, with just a little preparation, these beautiful plates full of delicious scallops, hearty spaghetti squash and a creamy, sweet yet spicy apple brandy sauce can be on your dinner table tonight. 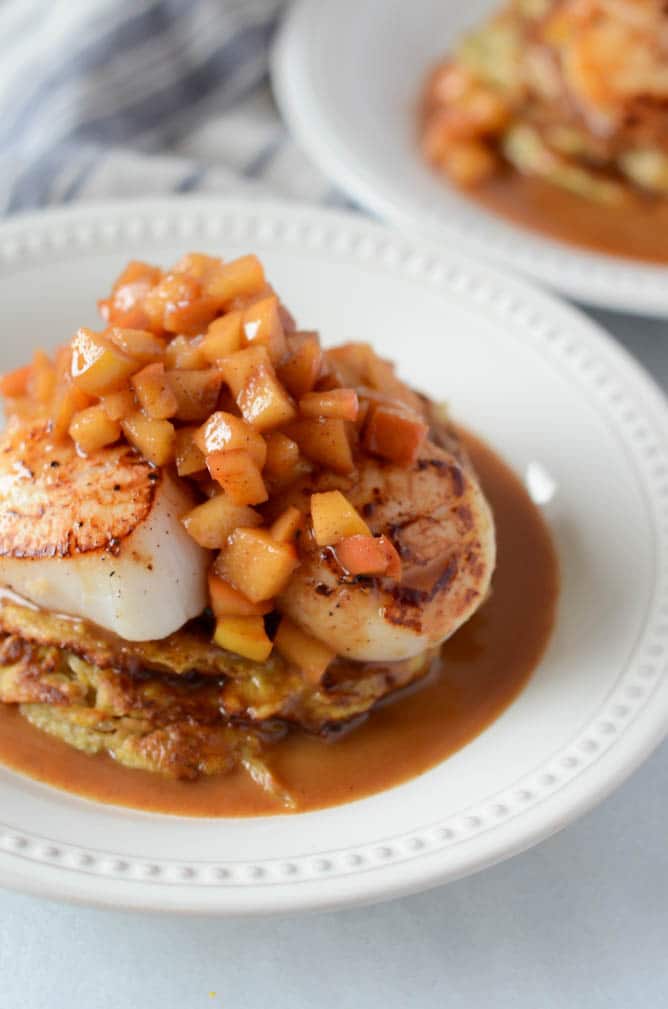 I seem to have a penchant for serving scallops and other seafood with decadent sauces and fresh root vegetables of some kind. It shows in my ever-so-popular Scallop Sundae and my family fave, Fish with Bananas, but these here Spiced Spaghetti Squash Pancakes with Seared Scallops and Apple Brandy Sauce are one-of-a-kind. While the other two are adaptable to any time of year, this dish just screams “fall,” so you better just go right on ahead and make it, like, this week.

Now, I know it’s Monday and, if you’re recovering from a fun-filled weekend like I am, you might need just a little extra hand-holding to REALLY believe that this is a meal you can make on any old night of the week. So let me walk you through it!

The first thing we want to do for these Spiced Spaghetti Squash Pancakes with Seared Scallops and Apple Brandy Sauce is roast up some spaghetti squash to make into pancakes. We’re talking latke-style pancakes, not Saturday morning breakfast pancakes. They really are made quite similarly to latkes. Once we shred up the cooked spaghetti squash, we simply mix it up with some eggs, some flour and loads of spices. Oh, and some Parmesan cheese! You don’t want to forget the cheese. I didn’t include it in my first go at these pancakes and when I included it in the second batch it added just a whole new level of flavor. 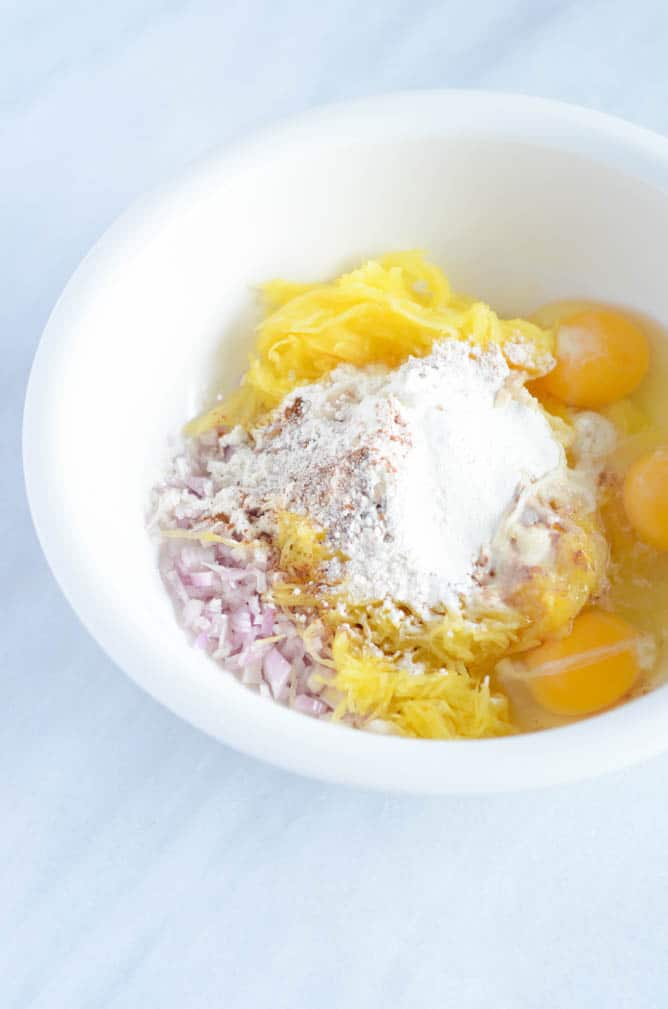 Once we have our batter all mixed and ready to go, we want to griddle up these pancakes ASAP. The longer the batter sits, the more the egg separates from the rest of the mixture, resulting in a slightly less cohesive pancake. Still edible, just not as pretty. A simple griddle will do for the grilling, and depending on the size, you can cook a few pancakes at a time.

When making your batches of spaghetti squash pancakes, I’d highly recommend placing them on an oven rack or something where the heat can circulate. I just stacked mine on a plate as I cooked them and over time they got just a tad soggy, so the rack would help prevent this.

Once our spiced spaghetti squash pancakes are done, it’s time to move to the apple brandy sauce. We’re saving the scallops for last because, well, freshly seared scallops. There’s nothing much better than their smooth-as-silk tenderness hot off the pan.

For our sauce, we’re going to saute some cubed apples in just a little bit of butter and, of course, cinnamon (no fall meal would be complete without it.) Once we’ve got them going, we pour in our apple brandy AND regular brandy (I used both because I had it, but you could easily omit one or the other if you have no idea what you’ll do with two types of brandy sitting in your liquor cabinet.) We also add a touch of brown sugar to really add that rich caramelization and a dash of cayenne to lend just the right amount of savory to this otherwise sweet sauce. Finally, finish off the sauce with a little more butter to get it to all really come together, and pour it into a small saucepan over low heat to keep it going while you cook the scallops.

For something that could easily be a very complicated recipe, I tried to keep these Spiced Spaghetti Squash Pancakes with Seared Scallops and Apple Brandy Sauce as simple as possible for you. This means we’re searing our scallops in the same saute pan that we started the sauce in. There will be just enough tasty tidbits left in the pan to give the scallops a light, cinnamon-apple flavor, but you’ll want to add a touch more olive oil and butter to get that really good sear.

Once you add the scallops to the hot pan, they’re ready in a flash. We’re talking 6-8 minutes MAX. I  usually prefer to err on the side of undercooking, as I find scallops often continue to cook a little bit after you remove them from the heat. Plus, there’s nothing worse than overcooking these little nuggets of the sea L We want them cooked just perfectly. No rubbery, chewy scallops here!

Now that all of the cooking’s out of the way, it’s time to dish up our plates. We start with a base of spiced spaghetti squash pancakes, and place our scallops delicately on top. We then ladle on alllll the apple brandy sauce. (Trust me, you don’t want to skimp on this, the sauce is sooooo good and you’ll definitely want enough to spread it allll over those pancakes.) 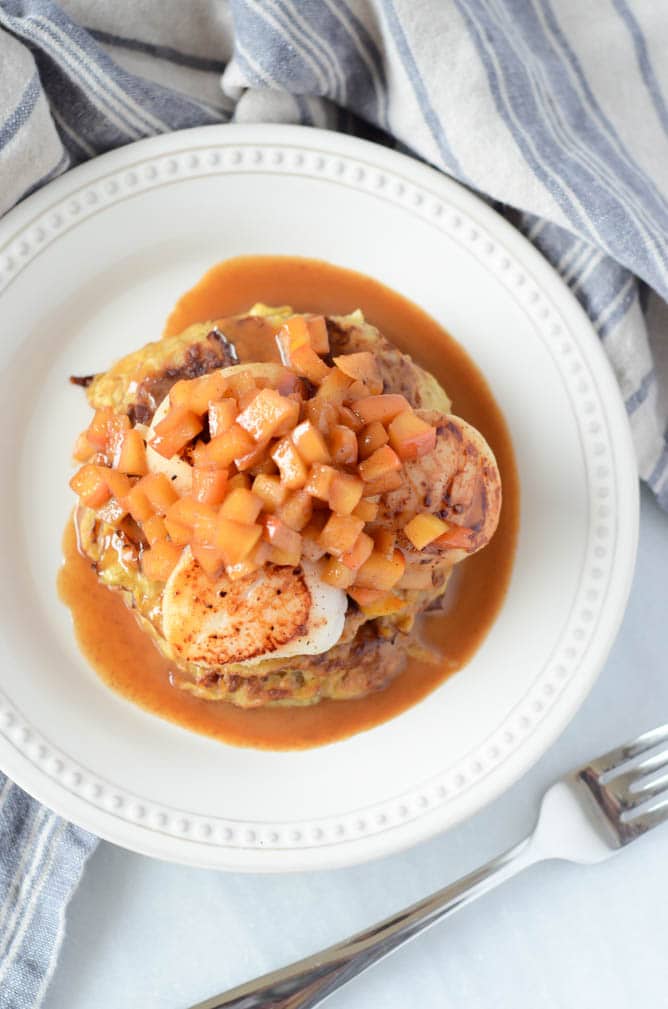 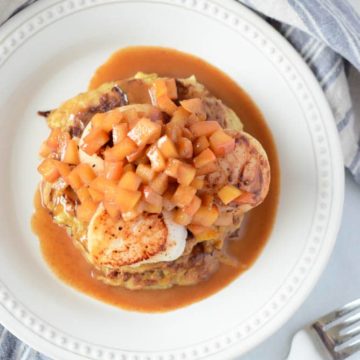 For the Spiced Spaghetti Squash Pancakes:

For the Apple Brandy Sauce:

For the Seared Scallops: