These Peanut Butter Banana Breakfast Cookies are the perfect treat for your toddler to kick off the day on the right foot – he or she won’t even know they’re healthy! 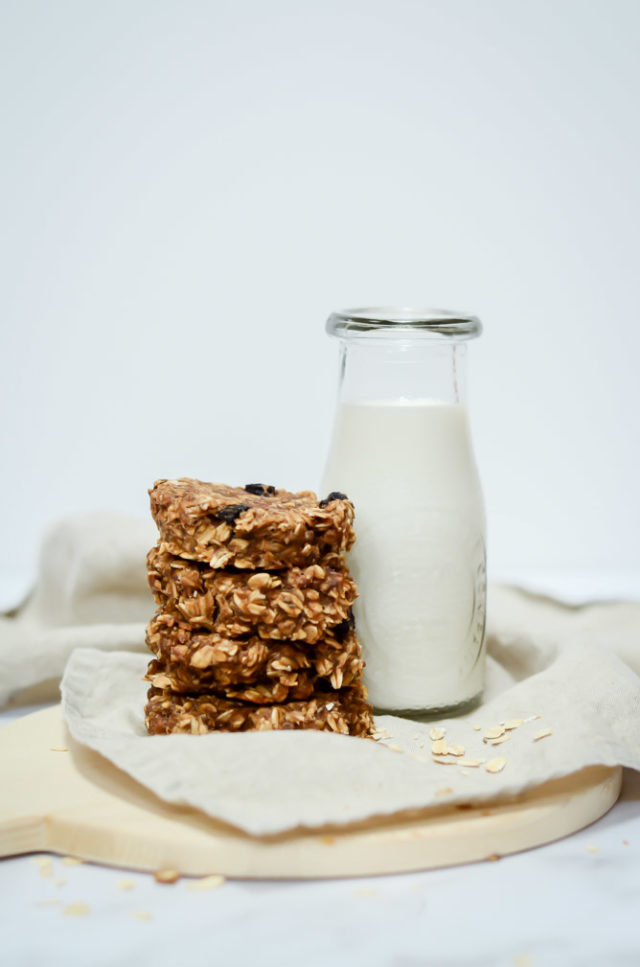 More specifically, what toddler doesn’t want cookies for breakfast? And what if I told you I’ve come up with a hearty and healthy cookie that is both toddler-approved and also perfectly acceptable to enjoy as the most important meal of the day?  And what if it was something you could prep far in advance to enjoy throughout the busy week? Because that’s what you’ll get with this recipe for Peanut Butter Banana Breakfast Cookies.

If you know me at all, you know I’m all about enticing my 18-month old to eat a healthy, balanced diet in any way I can. I’m no stranger to mixing vegetables and other superfoods into popsicles, muffins, pancakes and mac-and-cheese that she gobbles up on the regular. Now I’m proud to say I can add these Peanut Butter Banana Breakfast Cookies to my healthy homemade toddler food arsenal. 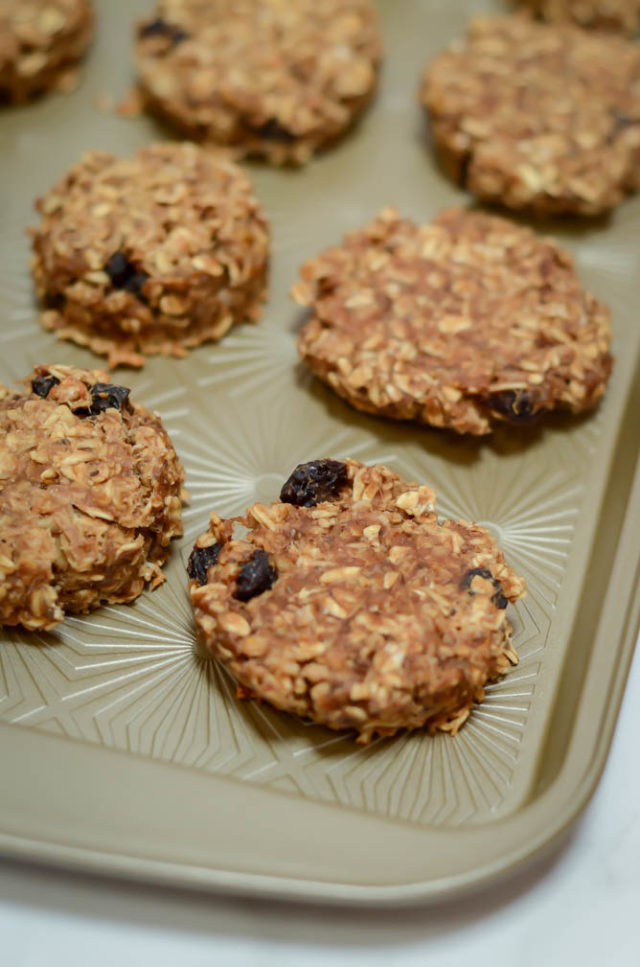 Not only are they chock full of healthy ingredients like peanut butter, bananas, oats and chia seeds, but I also love that they’re portable. This makes them the perfect on-the-go healthy breakfast for rushed mornings because, let’s face it, sometimes we just need to resort to that car seat breakfast.

There’s some other great news about these Breakfast cookies, too:

Simply mix all of the ingredients together in one bowl, scoop out even sized amounts of dough onto a parchment-lined baking sheet (saving on dishes wherever we can), and pop them into a preheated oven for 15-18 minutes. That’s all there is to it, folks! 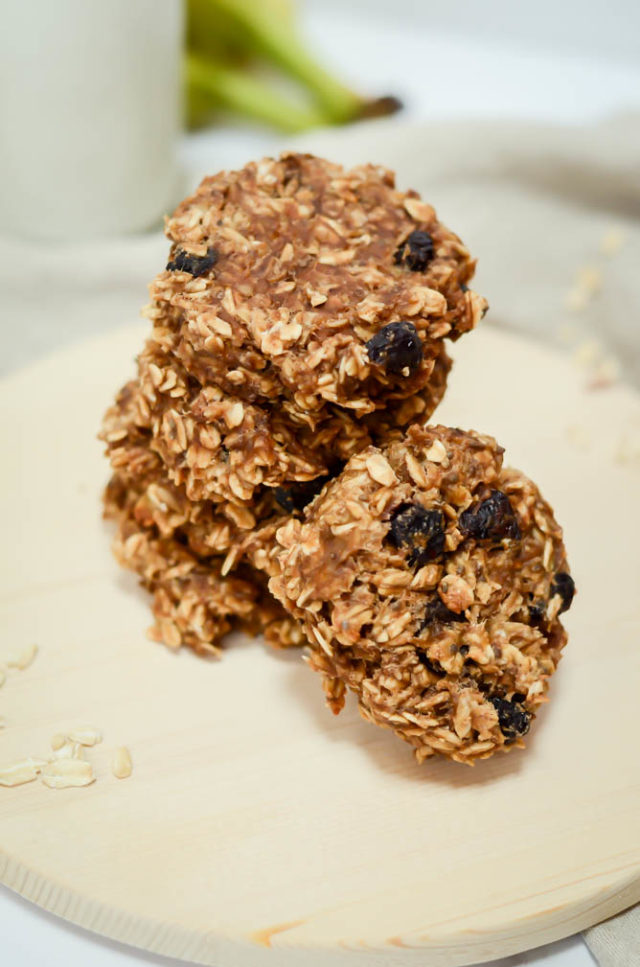 I think we all know by now how important it is to start our day off on the right foot nutrition-wise, but in case you forgot…

Benefits of a Healthy Breakfast for Kids

You can read more about each of these benefits here.

You can find more healthy toddler breakfast ideas in this roundup of Easy Breakfast Recipes That Are Baby-Led Weaning Approved, and in my e-cookbook, 30 Freezer-Friendly Recipes for Babies and Toddlers. 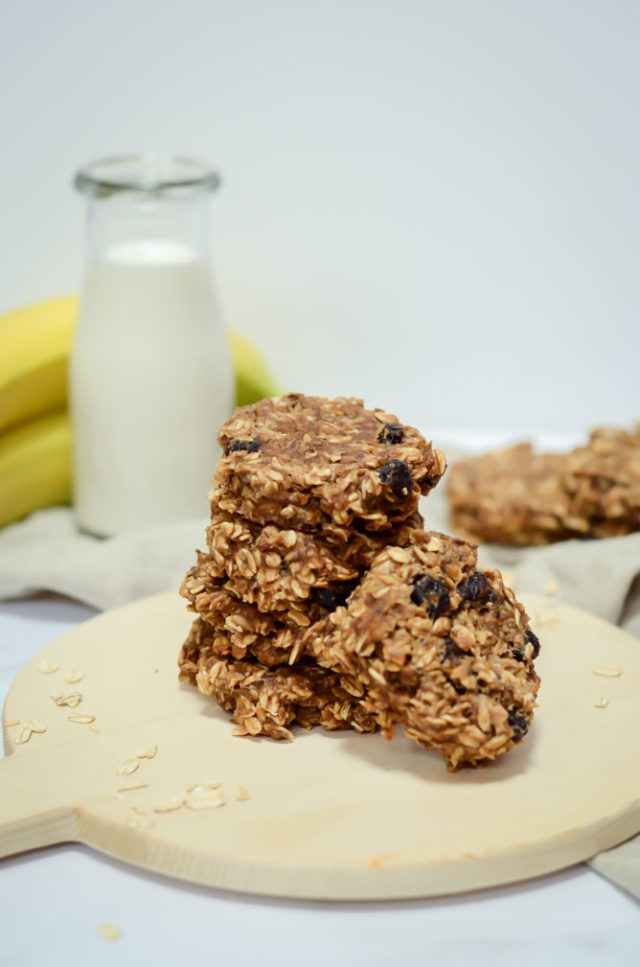 What are your favorite breakfasts to feed your little ones? Let me know in the comments below! 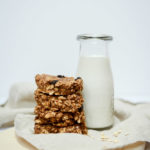 These Peanut Butter Banana Breakfast Cookies are the perfect treat for your toddler to kick off the
day on the right foot – he or she won’t even know they’re healthy!

These are not your average cinnamon rolls with flavors of banana, chocolate and walnuts. Chunky Monkey Cinnamon Rolls taste just like your favorite ice cream flavor! 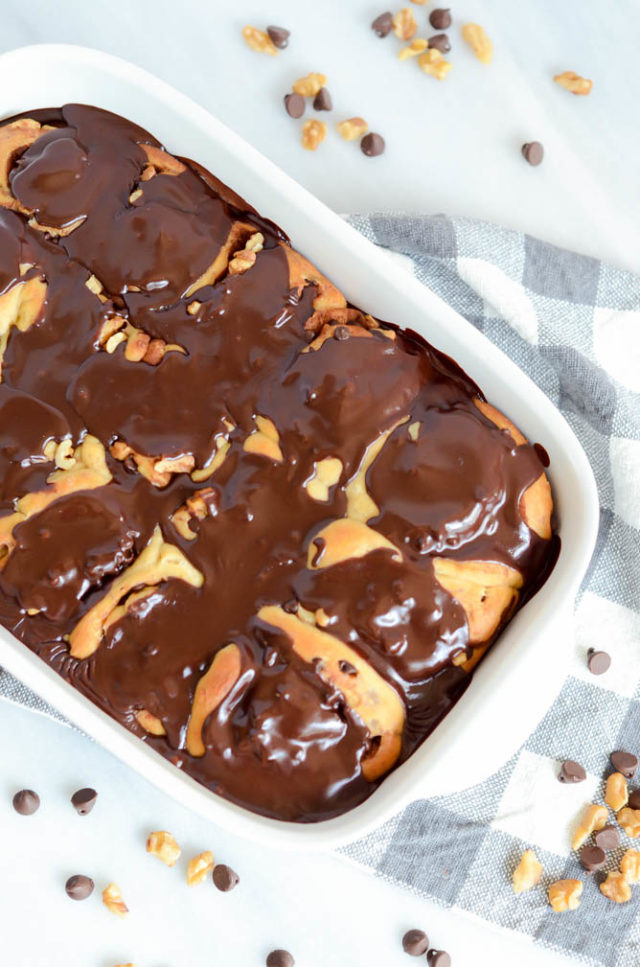 Who doesn’t need cinnamon rolls on a Monday? I know I sure do! Especially when they’re loaded with banana, chocolate and walnuts like these Chunky Monkey Cinnamon Rolls with Chocolate Glaze. I don’t even think that these need further discussion, but a discussion we will have.

As I mentioned in my post for these Pumpkin Praline Cinnamon Rolls with Bourbon Cream Cheese Frosting, I owe my deep love for all flavors of homemade cinnamon rolls to my Dad. Over the past couple of years, good ol’ Dad has been dreaming up different combos like Caramel Apple, Blueberry, Chocolate Chip, you name it, and if we’re lucky he’ll have some baking away in the oven for breakfast whenever we go up home to visit.

Two weekends ago, we were up there helping my sister move into her new house, and my parents decided to throw a little brunch to celebrate my birthday the next morning. Sure enough, Dad was in the kitchen the night before the brunch whipping up the above-mentioned Blueberry Cinnamon Rolls, and I decided it was high time for me to feature another cinnamon roll flavor on this here blog using his trusty recipe. 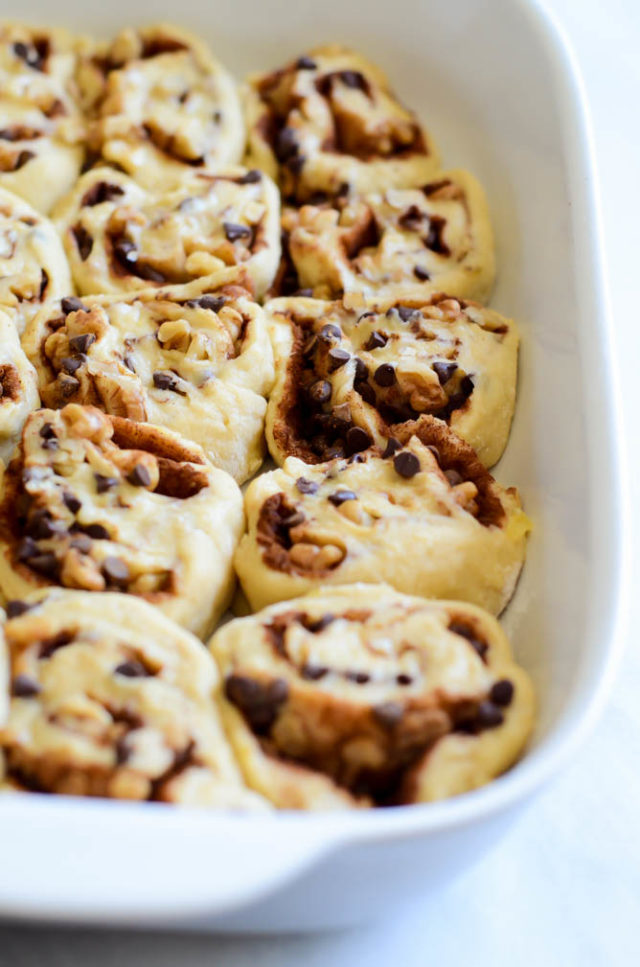 On this same trip, Dad and I were chatting over our coffee one early morning (as we usually do since we’re the only early-risers in the family) and he brought up the fact that it had been a while since he made his banana chocolate chip pancakes – another breakfast specialty of his. It got the gears turning in my mind and I figured, why not combine the two? Cinnamon rolls, banana, chocolate chip….all in buttery, flaky bread form? Yes, please!

Of course I couldn’t stop there, and I decided to go ahead and add toasted walnuts to the mix. I mean, who doesn’t want their breakfast to taste like the best Ben & Jerry’s ice cream flavor around? Oh, and the glaze….yes, I trashed that up too and made it a rich, ganache-like chocolate… 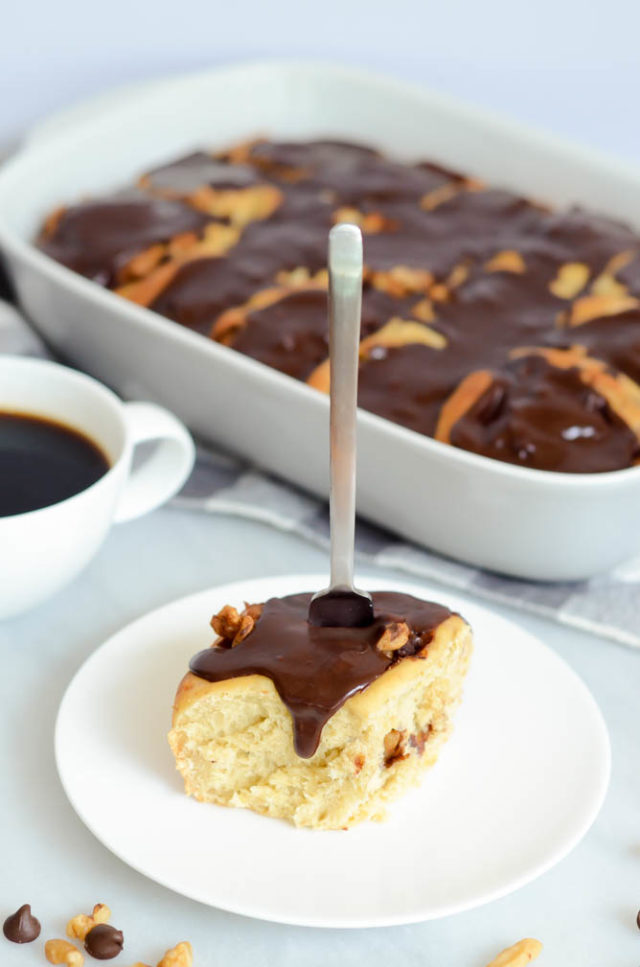 I’m proud to say that these Chunky Monkey Cinnamon Rolls with Chocolate Glaze turned into not one, but two pans of delicious, indulgent, chocolate-y breakfast pastries, half of which are living in our freezer right now so we don’t eat them all in one sitting. Plus, I love having a freezer full of baked goods for any last minute house guests or mornings where we just don’t feel like cooking!

You’ll notice that the base for these Chunky Monkey Cinnamon Rolls is very similar to my Pumpkin Praline Cinnamon Roll recipe. That’s the beauty of cinnamon rolls! Once you get the basic formula down, you can swap different ingredients in and out to make alllll of the flavors. 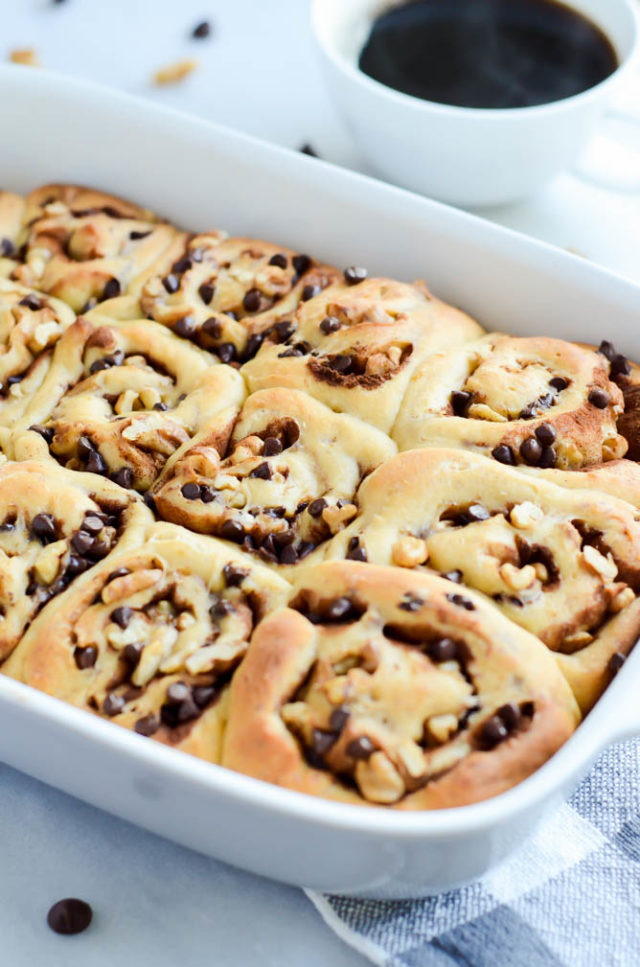 You’ll also notice that there is (once again) a very long prep time. Don’t be discouraged by this! The hands-on time is really quite minimal, the dough just requires an overnight rise in the refrigerator. All the better if you want an easy breakfast that’s ready to just pop in the oven in the morning (and fill your house with the most heavenly aroma at the same time!)

The dough for our Chunky Monkey Cinnamon Rolls with Chocolate Glaze is brought together using a stand mixer fitted with the dough hook, and is then rolled out into a rectangle over a large floured surface.  This is where our banana will live, mixed into the buttery dough just like you would when making banana bread.

The next step is the delicious, ooey gooey filling. The rolled out dough gets a light brushing of butter, and then a heavy dusting of ground cinnamon. We sprinkle our mini chocolate chips and toasted walnuts over that, and then we’re ready to rock-and-roll! 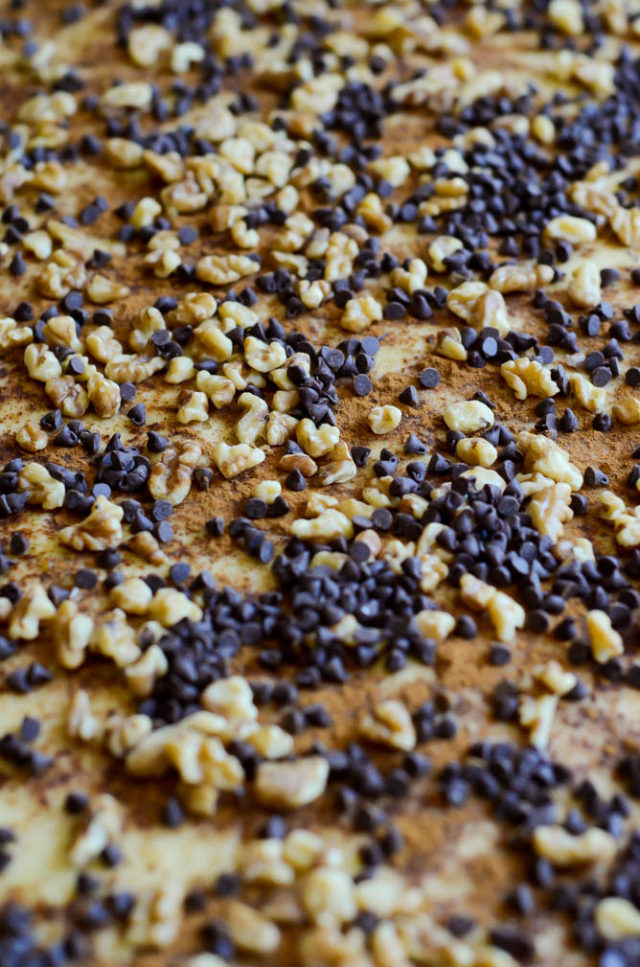 That’s right, time to roll up the dough into a long, tight log. I failed a bit at the “tight” part, but was able to make it work by using a rubber spatula to scrape the dough off of my marble slab (it can get a bit sticky) and guide it onto the rest of the roll.

The rolling is literally the hardest part (besides waiting for the cinnamon rolls to rise!) and once you’re done with that just slice it up and tuck the spirals into a couple of baking dishes coated with cooking spray. Wrap them up and stick ‘em in the fridge overnight, and in the morning you’re just 45 minutes away from incredibly mouth-watering Chunky Monkey Cinnamon Rolls with Chocolate Glaze! 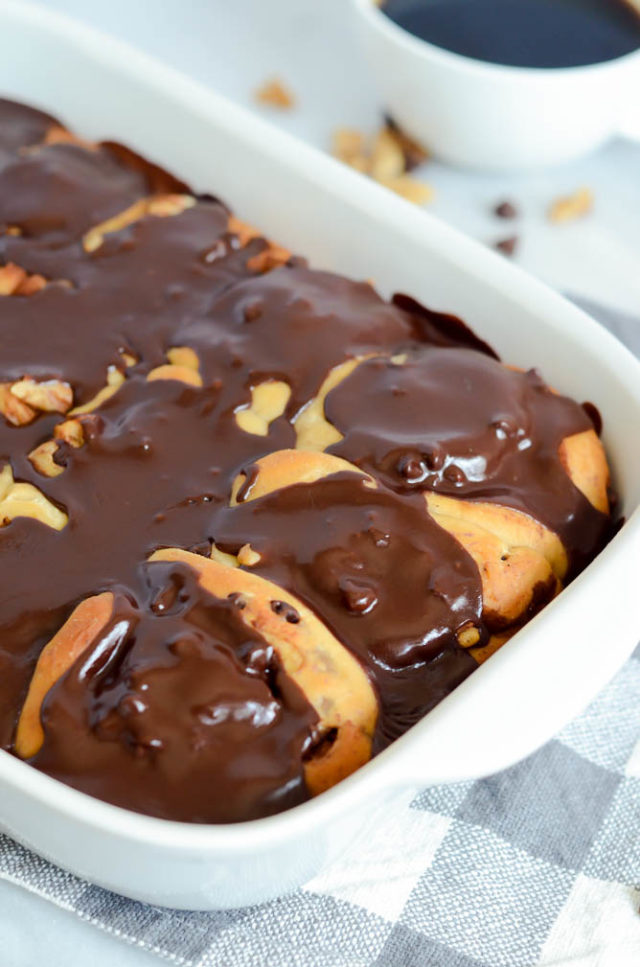 I like to let the cinnamon rolls have a little bit of a warm rise in the morning, and to do this I just turn the oven on to 250 degrees for about 5 minutes, then turn it off and put the rolls in for 10-15 minutes. After they’ve had some time to rise, I take the rolls out to, set them on top of the oven, and preheat the oven to the baking temp of 350 degrees. Once the oven is preheated, stick in the cinnamon rolls and in 30 minutes your house will smell like your favorite bakery – promise. 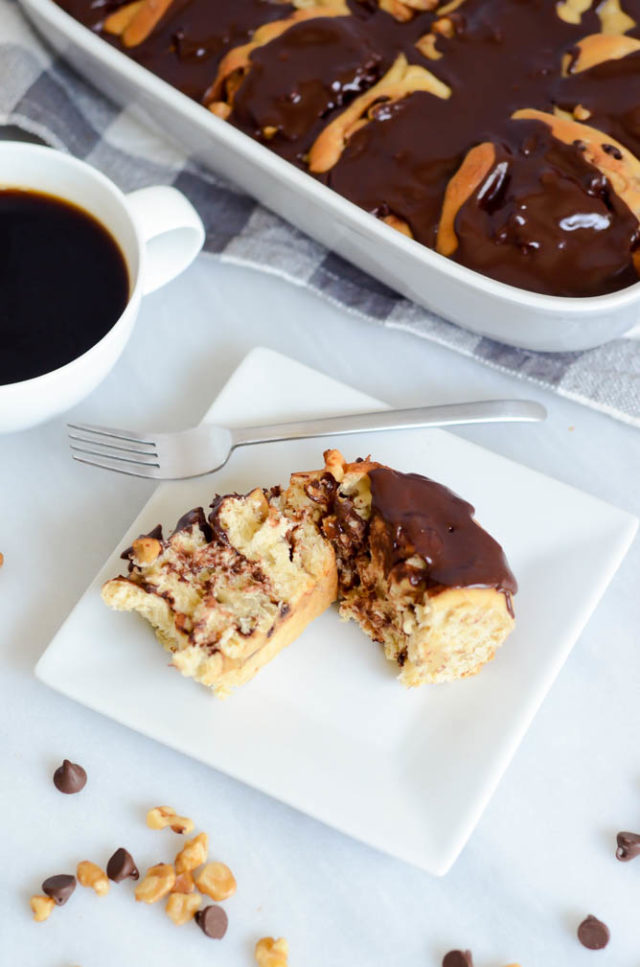 And that’s it! Really, as long as you’re cool with popping the rolls in the refrigerator overnight to rise, this recipe comes together in a snap and with very minimal effort. I mean, we’re talking weekday breakfast status right here. So what are you waiting for? 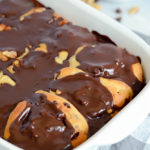 These are not your average cinnamon rolls with flavors of banana, chocolate and walnuts. Just like your favorite ice cream flavor!

This recipe spins the classic, Southern cake comprised of pineapple, banana, pecans and spices into a Hummingbird Bread that’s perfectly acceptable to enjoy for breakfast. 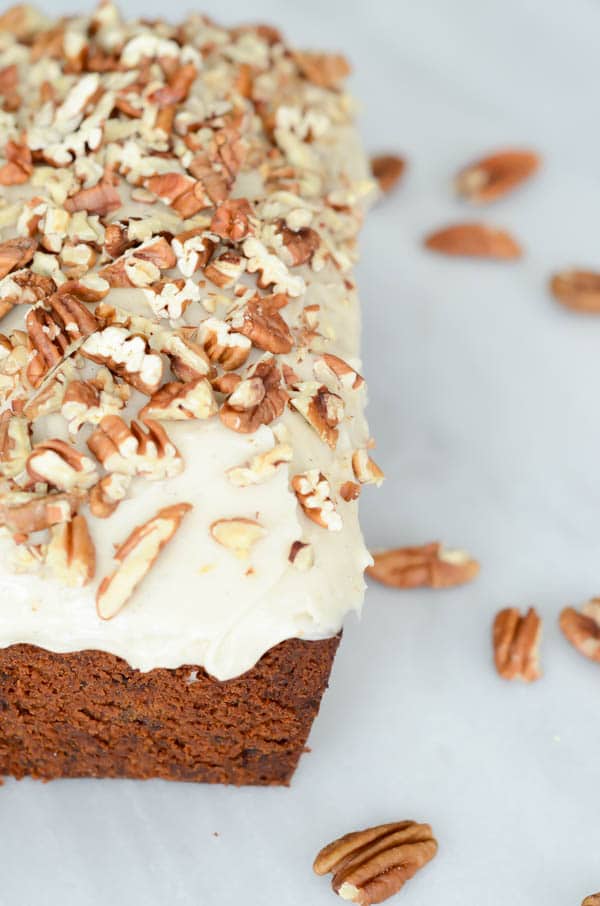 Who here has heard of Hummingbird Cake? If you have, I hope you are as enlightened as I was when I learned what I am about to tell you. If you haven’t, prepare to have your mind-blown. You see, I’ve known about Hummingbird Cake for quite a while now (I’ve never been one to shy away from overtly claiming my love of carbs and all things that fall under the baked goods category, see Exhibits A and B), yet it wasn’t until I was preparing this recipe for Hummingbird Bread that I learned about the dessert’s origins. Yes folks, you read that correctly, I’ve simply turned a classic cake into loaf form so it can be reasonably acceptable to ingest as the most important meal of the day –> Breakfast! 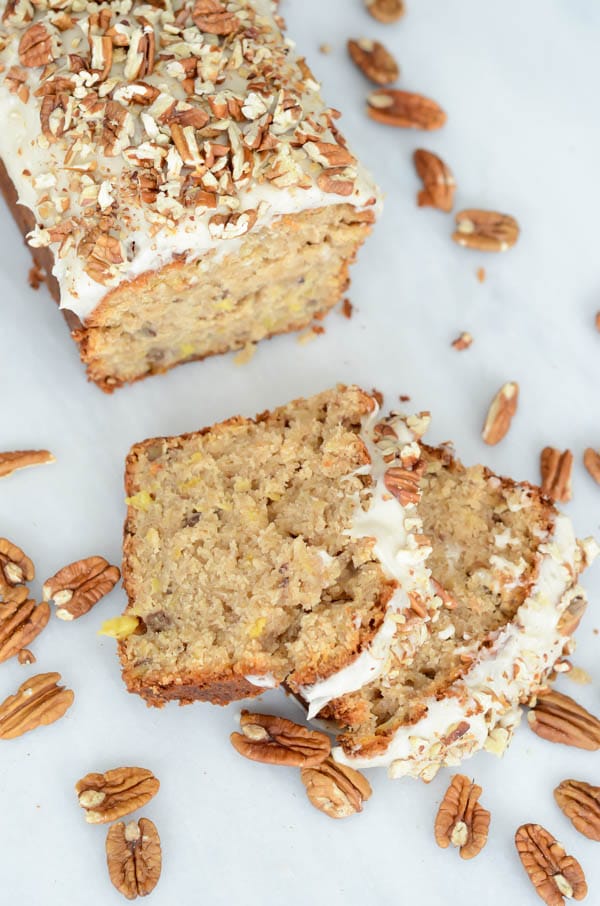 But back to the fun little nuggets of history I discovered during my recipe research:

Pretty cool, huh? You know what’s even cooler? Today I’m showing you how to make Hummingbird BREAD so you don’t even have to wait until dessert to enjoy this fruity, moist, spiced cake with a delicious cream cheese frosting. IMHO, something with this much fruit and protein from the nuts and cream cheese should certainly be acceptable to ingest prior to noon with a warm mug of coffee in our hands. 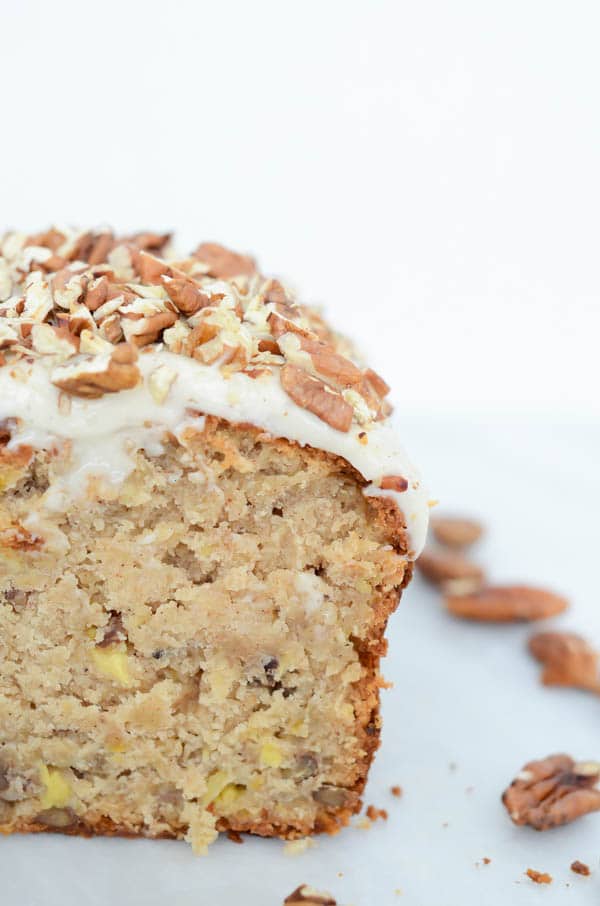 So, confession. This recipe took me THREE tries before I was able to perfect it. Yes, that’s right. The first couple of times I tried to make Hummingbird Bread, I had ambitions of running a cream cheese swirl through the middle of the loaf and topping it with a pecan crumble. Let’s just say that (a) my batter to loaf pan size ratio was WAY off (thank goodness I put a jelly roll pan underneath to catch any drips…dodged an oven fire with that one!) and (b) my “cream cheese swirl” tasted delicious but was too heavy (and dense) to sit correctly between the layers of batter. I’d end up with an overly-browned top of the loaf with a gooey, undone center. #foodbloggerproblems 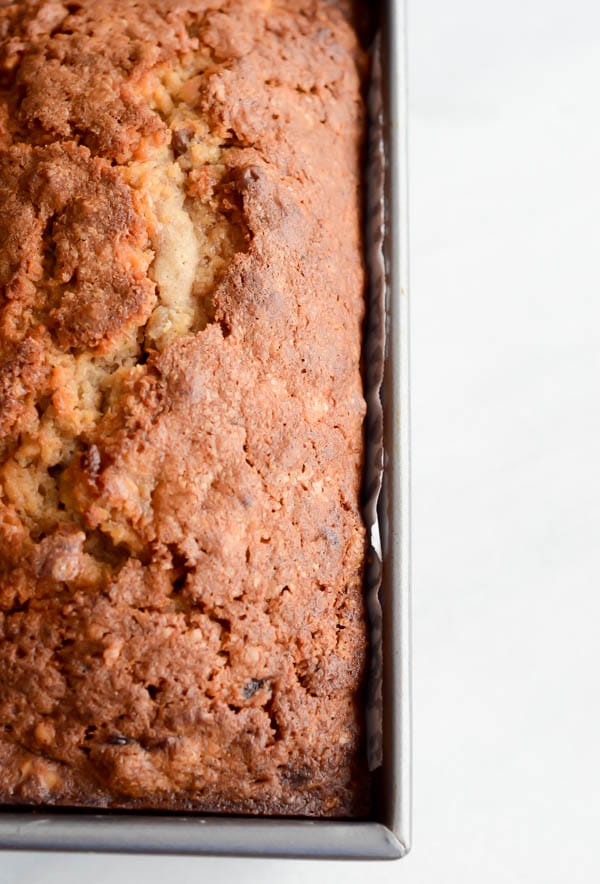 I finally figured out that the best solution was to keep the Hummingbird Bread as true to form as possible (while still holding on to my creative idea to turn this cake into a bread), and so (after realizing how good the “cream cheese swirl” tasted on its own without even being cooked) I decided to frost the loaf with the sugary, melt-in-your-mouth, creamy cream cheese mixture rather than try to hide it inside. It made for a much more structurally stable loaf AND I must say it made it much more photogenic 😉 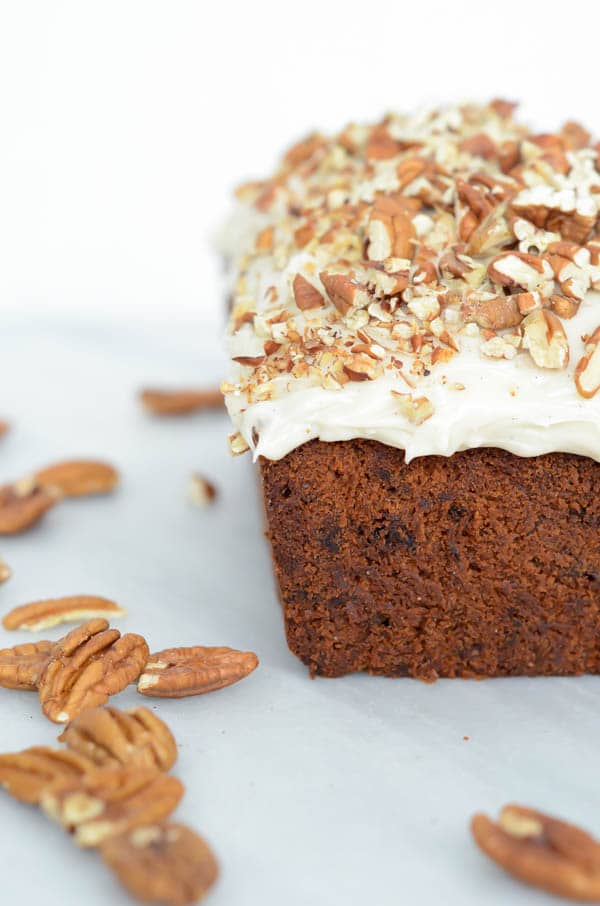 I would like to point out, though, that I did not waste ANY of those failed loaves. A quick turn in the refrigerator firmed up the cream cheese swirl loaves enough so that, although not structurally stable, they are definitely, absolutely, completely edible. One down and I’ve got two more loaves to go (falling apart at the seams.) They’re just sitting in the refrigerator waiting for me on the next night I’m up until the wee hours blogging or cleaning because I haven’t ventured out of the kitchen for the past three weekends and have neglected every other part of the house and have my sister coming to visit this weekend. Oh, sorry, just me?

Well, if you’d like to come over and help me clean my house, I’d be more than happy to pay you in Hummingbird Bread…and good company? 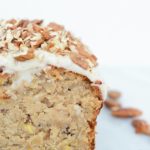 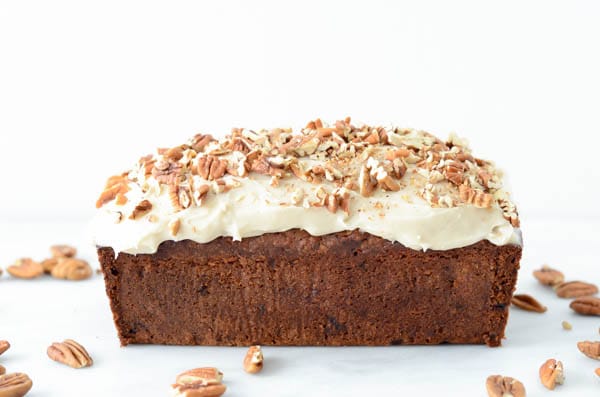