These One-Pan Bison Meatballs come together in just under an hour, with only 15 minutes of hands-on time. They’re tender and juicy, and perfectly complimented by charred broccolini, an herby tomato sauce and melted Fontina cheese. 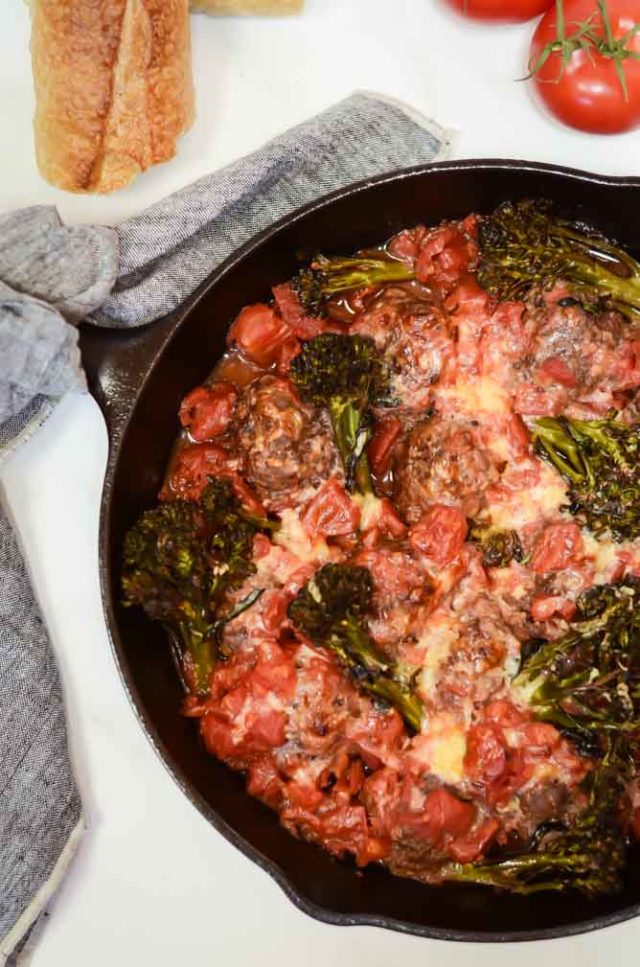 If you’ve never treated yourself to bison before, you’re in for a huge treat with these One-Pan Bison Meatballs with Broccolini and Tomato Sauce! They’re tender and juicy and full of flavor. In fact, you may never want to go back to regular old ground beef again.

You can think of bison as beef’s fancier and more flavorful cousin, although, bison is actually lower in calories and higher in protein than both ground beef and turkey. It does tend to be more expensive, so I say save the bison for a once-in-a-while treat as opposed to an everyday thing.

You can usually find ground bison wherever ground beef is sold. In fact, I found a high-quality double-pack of ground bison at Costco. I popped one of the packages in the freezer (because we all know how helpful it is to have freezer options on hand!) and used the other one to make these delicious One-Pan Bison Meatballs.

HOW TO COOK IT

When it comes to cooking, ground bison can be prepared in the exact same way ground beef is prepared. Aside from meatballs, you could also use ground bison to make burgers (bison burgers are a favorite of mine), taco meat or even a meat sauce for over pasta. 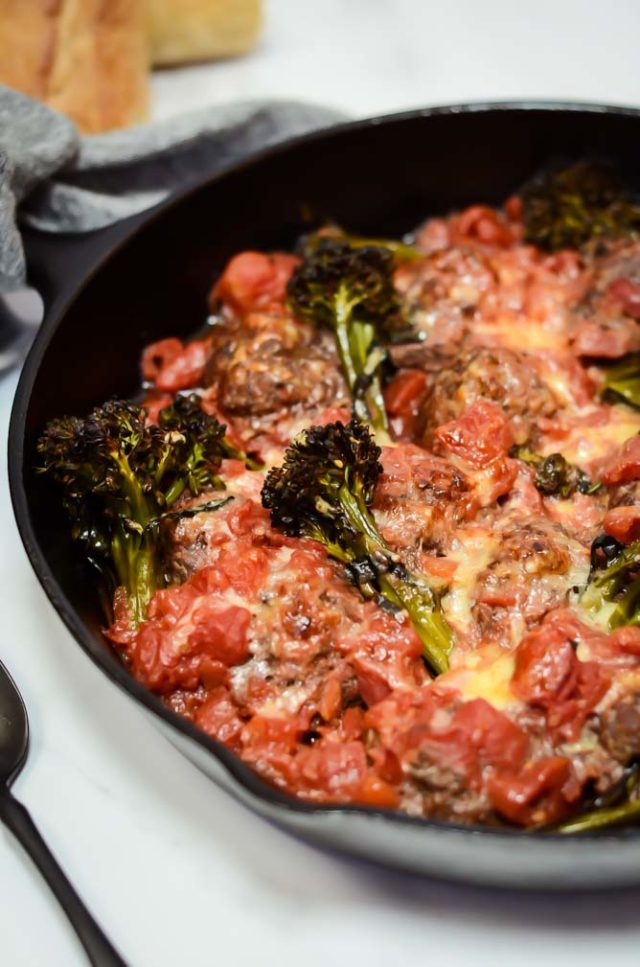 But today we’re here to talk about meatballs, so let’s get to it!

Making the meatball mixture itself is the longest hands-on part of the process, and you’re going to have to get a little bit dirty. After all, I find the best way to mix up some meatballs is to get your hands in the mixing bowl to blend it all together.

You’re going to throw all of the typical meatball ingredients into the mix – egg, breadcrumbs, garlic, shallots, oregano – you don’t need anything special because, when it comes to bison, it already has so much flavor.

I guess this recipe is technically a two-dish one (if you count the mixing bowl), but once it comes to cooking, you’ll only need a large cast iron skillet [*affiliate link] to make these meatballs come to life.

You’re going to place your meatballs in a piping hot cast iron skillet on the stove first – you want to give them a good sear so they have that nice crispy outside before baking – then pour all of the tomato sauce ingredients over top (with the exception of the pancetta, which goes in first so you can use some of the oil for cooking the meatballs). Top all this with broccolini and delicious grated Fontina, throw it in the oven for just under 30 minutes (boil up some pasta or quinoa while you’re waiting) and – voila! – your One-Pan Bison Meatballs with Broccolini and Tomato Sauce are ready to be devoured by the fam. 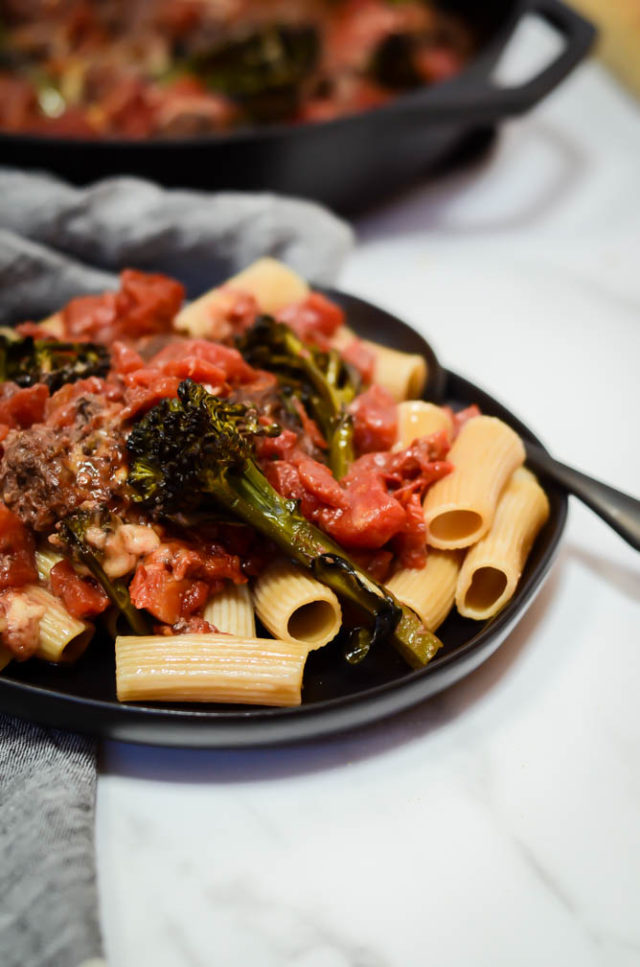 Have you ever tried cooking with ground bison before? Let me know in the comments below! 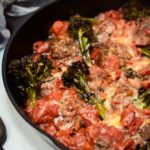 These One-Pan Bison Meatballs come together in just under an hour, with only 15 minutes of hands-on
time. They’re tender and juicy, and perfectly complimented by charred broccolini, an herby tomato sauce and melted Fontina cheese.

We’re starting to get real creative with the healthy stuff over here. Like, I can’t believe I would ever create this Spicy Stuffed Pasilla Pepper recipe without even thinking about needing to add any cheese. Who am I?

I’m a gal that’s open to trying new things and willing to give anything a shot as long as I don’t have to cut anything else out of my diet completely, that’s who I am!

No, I’m not a vegetarian and no, I’m not gluten or dairy-free, but I’m up for trying anything as long as it’s made from whole, minimally processed foods. This is truly one of the things I love most about the healthy diet and lifestyle I’ve created for myself. Try everything, restrict nothing. I find that this relaxed view of whatever food I consume has been the savior in the long road to “eating recovery” I’ve taken since my college years. It hurts me to watch people struggle with binge-eating or not being able to control themselves in the presence of unhealthy food , simply because they tell themselves they absolutely CANNOT have something. 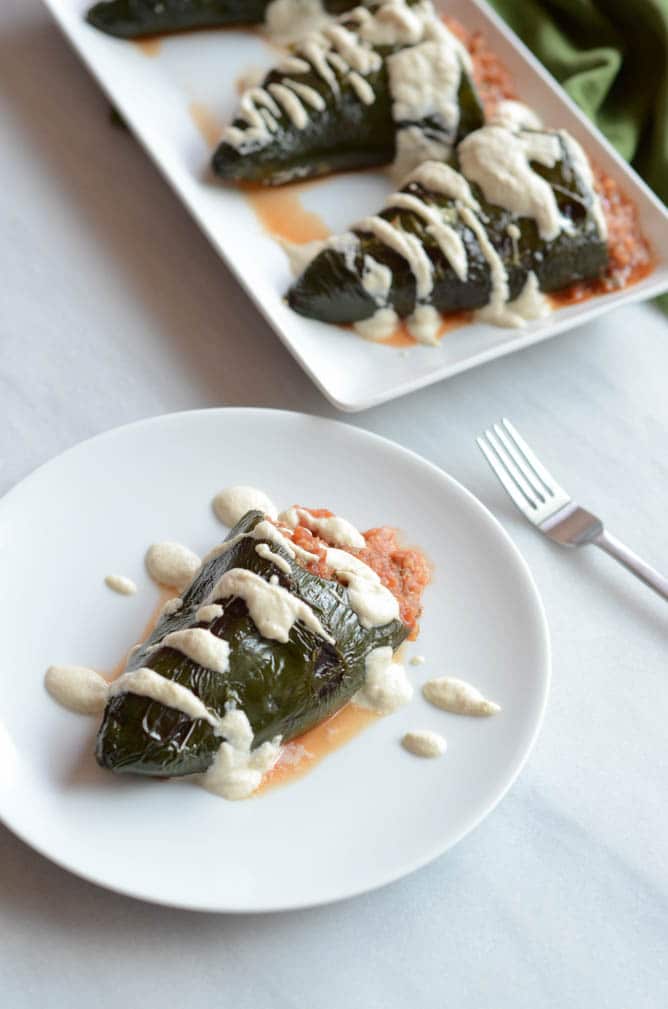 By allowing myself to eat anything I want, but being in tune with how hungry I am and how my body feels after I eat certain things, I can truly say I’ve become an “intuitive eater.” I eat something if it sounds good, but knowing that I can always have more later keeps me from going off the deep end and eating too much and feeling weighed down and uncomfortable.

That being said, I find cooking things outside of my norm a great challenge, and I find that when I do so, I often discover new recipes and flavors that I never would have thought of before. Which brings me back to these delightful Spicy Stuffed Pasilla Peppers with Cashew Cream Sauce. Yes, cashew cream sauce! You guys, this may be one of my new favorite secret weapons. I know, I know, it’s nothing new (folks have been talking about it for ages) but what I’m saying is, this is the first time I took a step out of my comfort zone and gave it a shot and, boy, am I glad that I did! 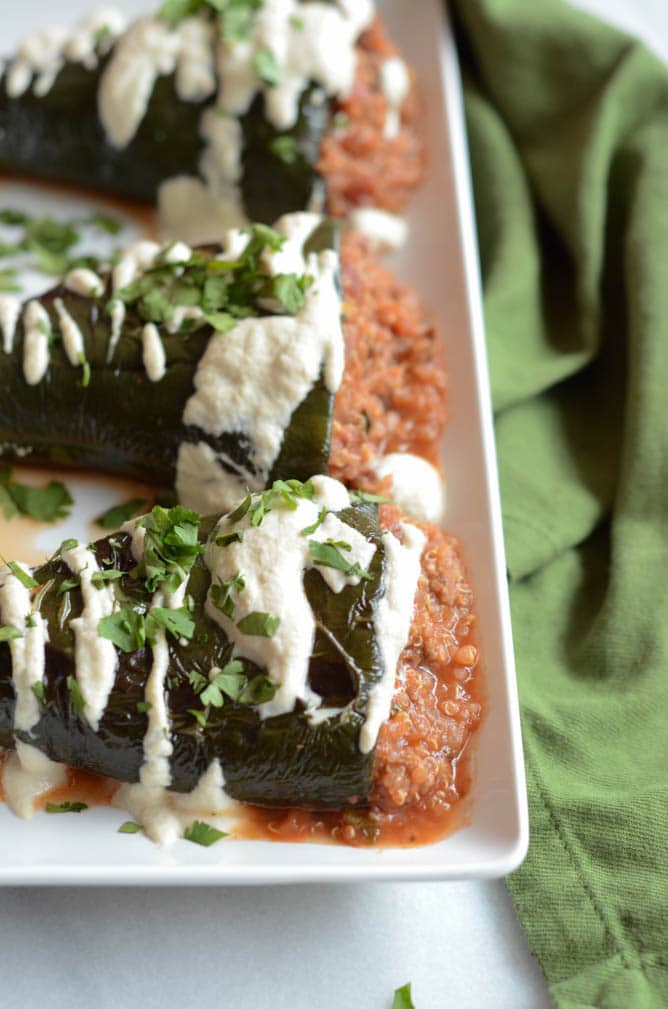 During the summer, I try my hardest to use as much of the abundant fresh produce available as possible in my cooking. There’s just nothing like preparing a healthy, satisfying dish with ingredients just recently pulled from the ground or picked from a tree.

One of my favorite vegetables to cook with during the summer is fresh pasilla peppers. They have just the right amount of spice and roast (or grill) up beautifully. They’re also the perfect size to stuff with all kinds of delicious, healthy fillings. Enter this delicious recipe I’ve created for Spicy Stuffed Pasilla Peppers with Cashew Cream Sauce. 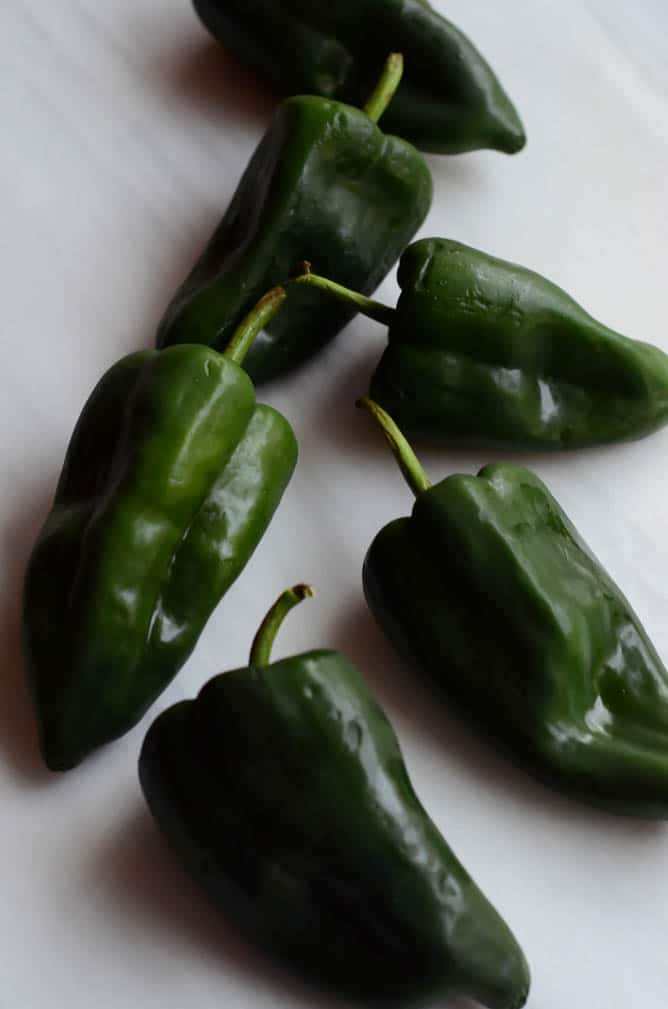 One of my favorite ways to stuff pasilla peppers is with a ground meat and tomato sauce combination. Tomatoes are a natural complimentary flavor to peppers, and the ground meat adds some substance.  Although you could use any type of ground meat here, I opted for ground bison as it is a bit leaner than beef and usually more humanely farmed. I also added quinoa to thicken up the filling a bit and include even more protein to keep us full and satisfied.

We all know that Chris and I have been really focusing on filling our bodies with whole, nourishing foods in these last couple of weeks leading up to the wedding, and this whole Stuffed Pasilla Peppers with Cashew Cream Sauce idea was borne from that mission. I don’t know about you, but I always LOVE adding cheese to any recipe that contains peppers and tomatoes. In an effort to cut down our cheese intake but still have some sort of creamy factor to the peppers, I decided to try my hand at the above-mentioned cashew cream sauce. Score! 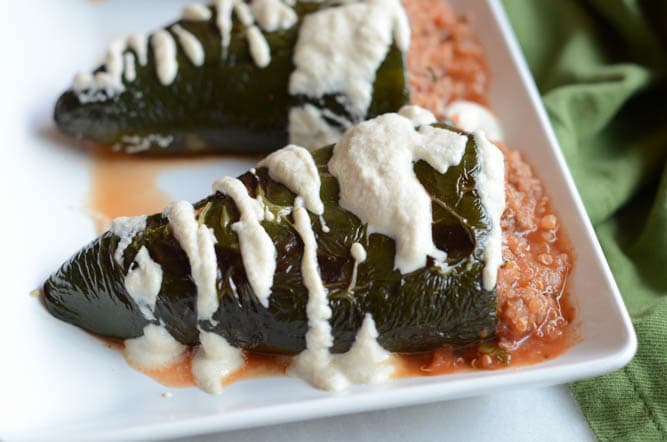 Not only are these Spicy Stuffed Pasilla Peppers incredibly tasty, they are also very easy to make. Since we don’t need to worry about melting cheese over top of the peppers, we actually roast the hollowed out peppers on their own and cook the filling on the stove.

The cashew cream doesn’t require any cooking and can be made up to three days in advance. I’ve recently started making this vegan condiment and find it’s the perfect healthy addition to many recipes, so you’ll want to keep a good stockpile in your refrigerator for use at any moment’s notice. Just be sure to heat up the amount you’ll be using on your peppers a bit before using to bring it up to the same temperature as the rest of the dish. 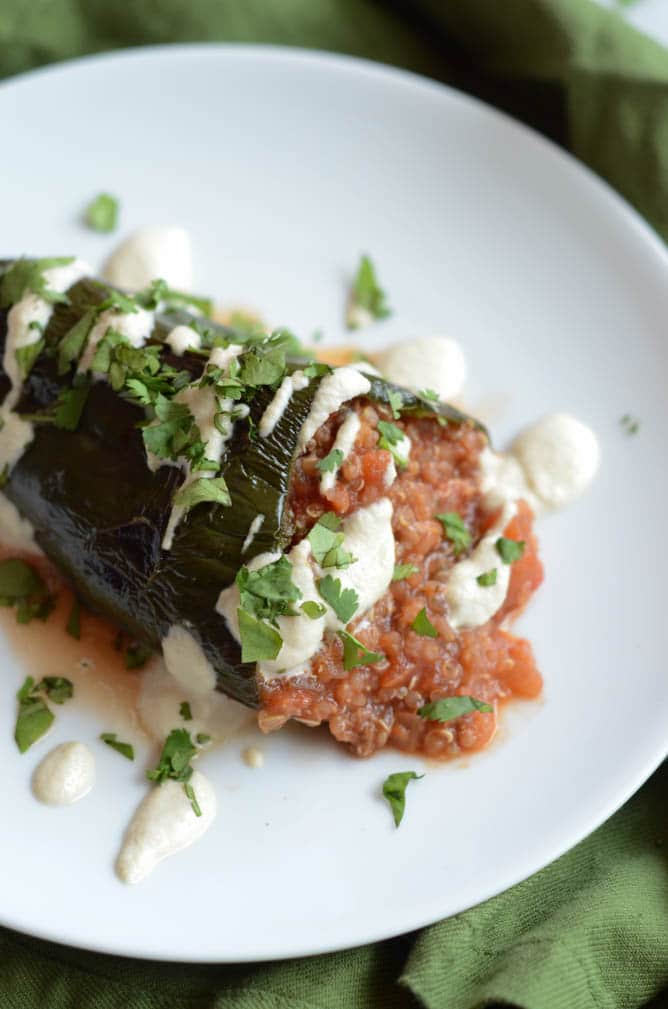 In a nutshell the prep goes something like this:

Whip up a batch of homemade cashew cream sauce (do it!)…

When served with a mixed green salad, these Spicy Stuffed Pasilla Peppers with Cashew Cream Sauce are the perfect weeknight meal. They come together quickly and won’t leave you feeling heavy or weighed down. They’re the perfect addition to your weekly menu rotation. So now my only question is, what are you waiting for?? 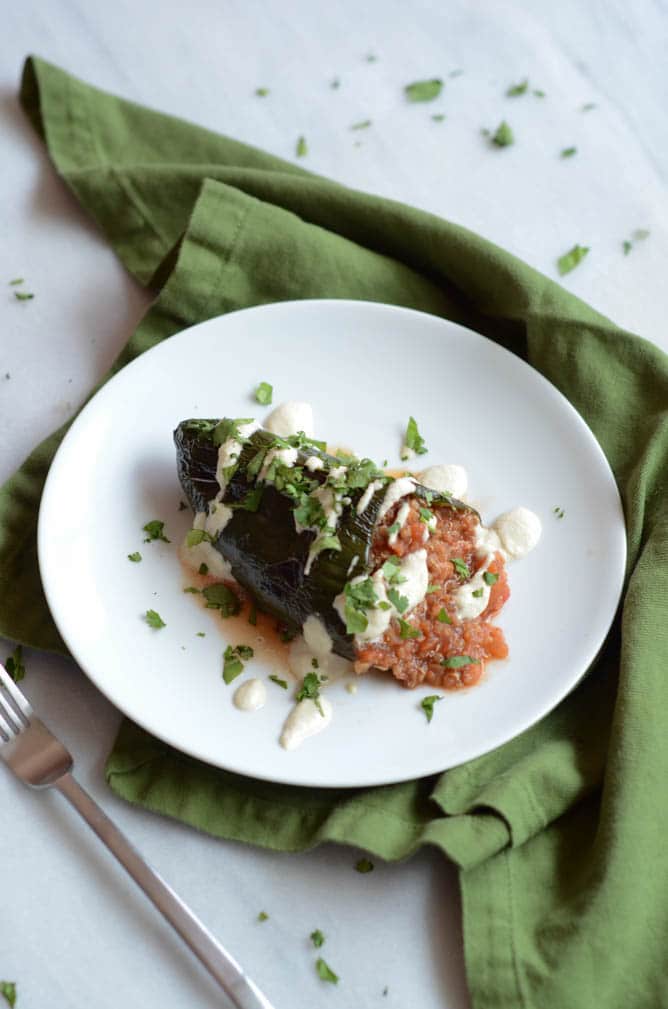 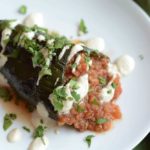 Note: You will most likely have both leftover filling and cashew cream. The good news is, both of these keep and reheat well. Place in airtight containers and keep in the refrigerator for up to a week.

Or this Ahi Poke Salad with Macadamia Nuts!