The BEST way to celebrate a special occasion on any day of the week, these festive waffles get their slight pinkish hue (and tasty tang) from freeze-dried raspberries and are loaded with multi-colored sprinkles to really take your breakfast over the top. The best part? They come together in almost no time at all! 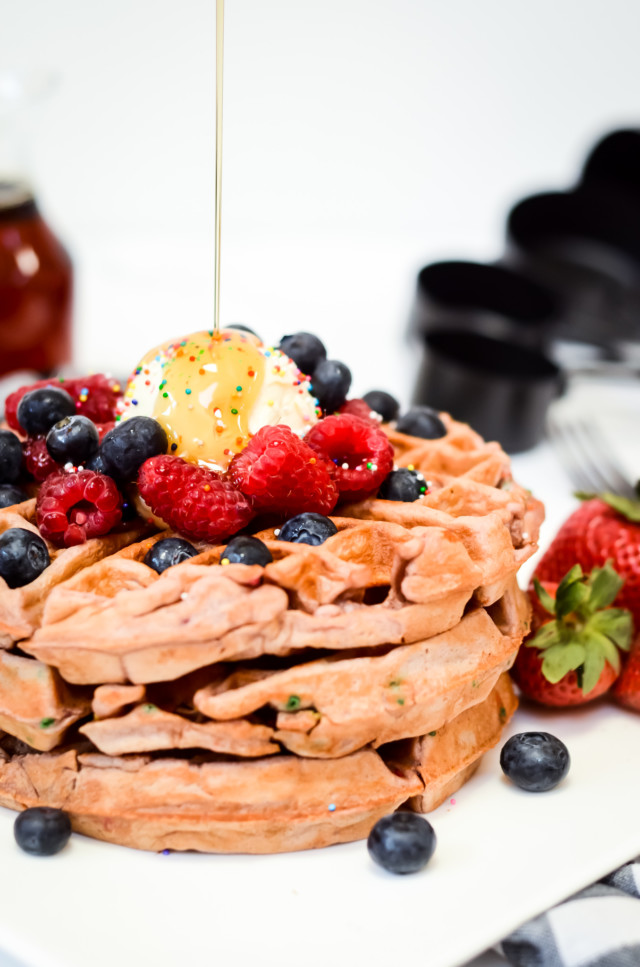 CaliGirl Cooking is a participant in the Amazon Services LLC Associates Program, an affiliate advertising program designed to provide a means for sites to earn advertising fees by advertising and linking to amazon.com.

ICYMI last week, I shared some big news on Instagram – Baby Girl #2 is coming this August! We are over-the-moon about this new special addition to our family and, such as was the case with the news of our first baby girl, I felt the need to make a new special recipe to celebrate. Enter these Weekday Festive Funfetti Waffles!

I’ve not shared a specific recipe using this particular technique, but one of my favorite ways to add a festive hint of color to many baked goods and sweet treats (without a ton of artificial colors or flavors) is by mixing in some crushed freeze-dried fruit. My favorite way to use it is in a homemade frosting recipe, but I decided to branch out a bit and give mixing it into waffle batter a shot. I’m thrilled with the result!

Now, because I (like many of you) have limited free time to make from-scratch recipes these days, I decided to make these Festive Funfetti Waffles as easy to whip up as possible. They’re so easy, in fact, that you could easily make them on a weekday morning if you have something special to celebrate. So, let’s get into it! 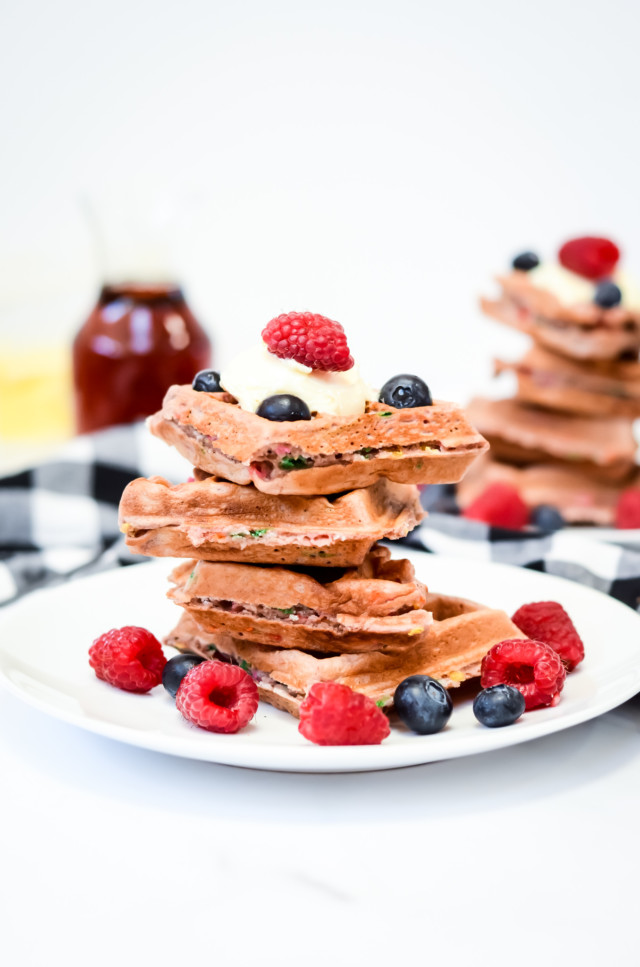 How to Make Funfetti Waffles

Okay, friends, I told you I was going to make this an easy one. That’s why we’re going to forego the “from-scratch” mentality and instead focus on finding a healthy and tasty boxed pancake and waffle mix. I used Bob’s Red Mill 7-Grain Pancake and Waffle Mix and loved it, but there are tons of healthy options out there.

Once you’ve settled on which mix you’re going to use, just follow the directions on the package (the recipe below is based off of the Bob’s Red Mill mix instructions) and also include the freeze-dried raspberries (which you can find at Trader Joe’s or on Amazon). You’ll want to mix together the batter using a blender to ensure the raspberries get properly incorporated into the batter. 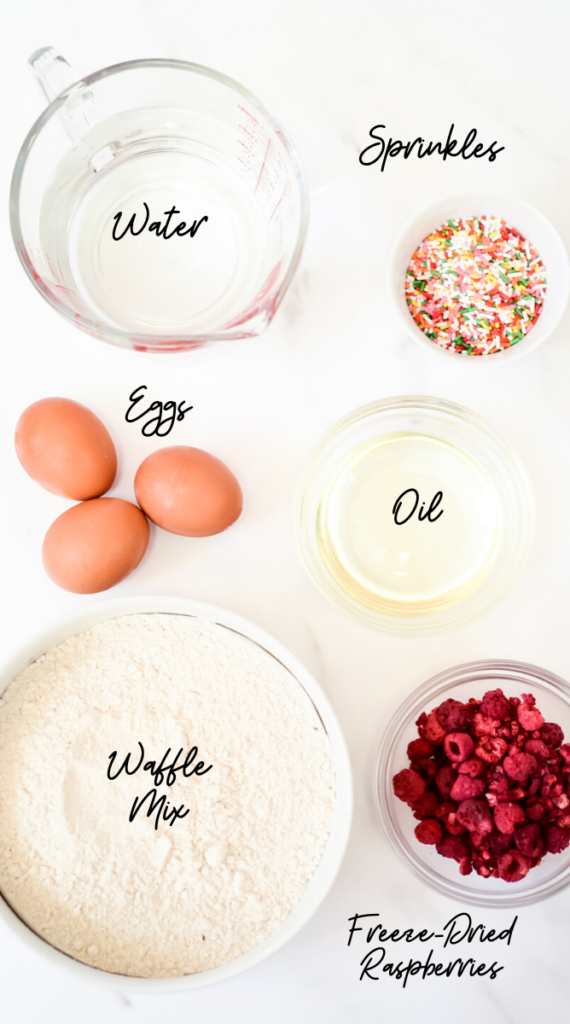 Once you have the batter made in your blender, you simply stir in some festive sprinkles. I highly recommend using this type, as the non-pareils such as those sprinkled on top in the photos tend to bleed a lot in a batter.

And once the batter is made, all that’s left is to whip out your trusty waffle maker (here’s one similar to the one I use) and cook as you would any other old waffle.

Ways to Enjoy Your Waffles

There are tons of different ways you can finish these festive bad boys off. Here are just a few: 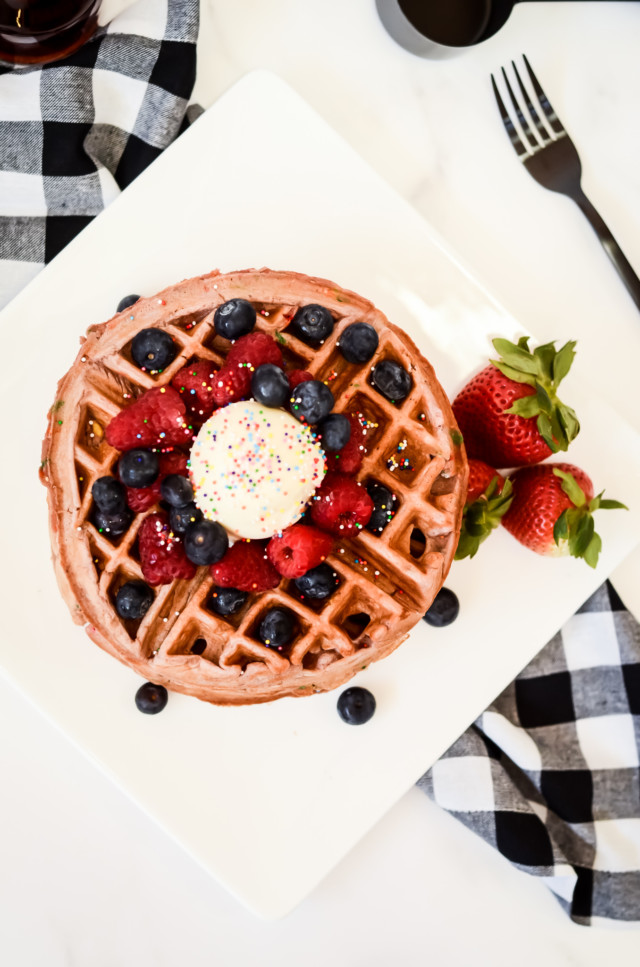 In my opinion, celebrating a special occasion at breakfast is far too often overlooked. Here are some other fun breakfast recipes you can make for your next birthday celebration:

These Kid-Approved Breakfast Banana Splits take your kids’ favorite after-dinner treats and make them a healthy yet entertaining breakfast. No cooking involved!

We all know that heading off to school is usually NOT our kids’ favorite time of day, but what if you make it fun with these Back-to-School Papaya Breakfast Boats?

Prefer a more savory celebration? Prep these Make-Ahead Breakfast Enchiladas the night before and just pop them in the oven in the morning.

What kid doesn’t want to eat pudding for breakfast? This Coconut Passion Fruit Chia Pudding will transport your entire family to the tropics whether it’s the middle of winter or the start of a monotonous school day.

So, what do you think? Are you ready to take your waffle game to the next level? If you make this recipe, please be sure to leave a rating and a comment to help other curious mamas find it! 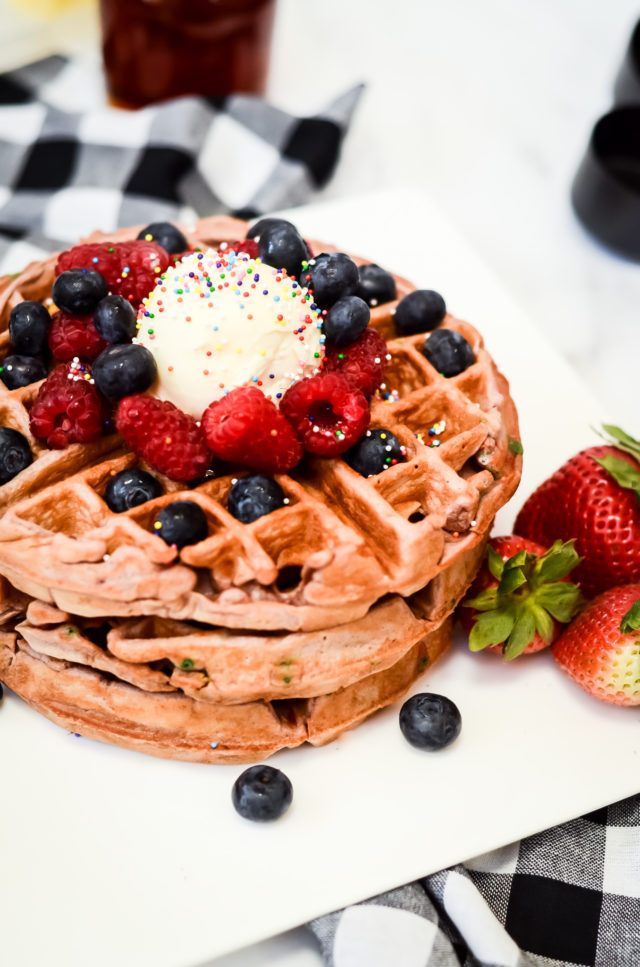 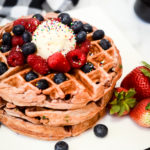 The BEST way to celebrate a special occasion on any day of the week, these festive waffles get their slight pinkish hue (and tasty tang) from freeze-dried raspberries and are loaded with multi-colored sprinkles to really take your breakfast over the top. The best part? They come together in almost no time at all!

*Exact ingredients and amounts may vary based on which waffle mix you’re using. Amounts for raspberries and sprinkles should remain fairly consistent for 6 waffles.

3. Waffle cooking times will vary depending on your specific waffle maker and how crisp you would like your waffles to be. I use one similar to this. 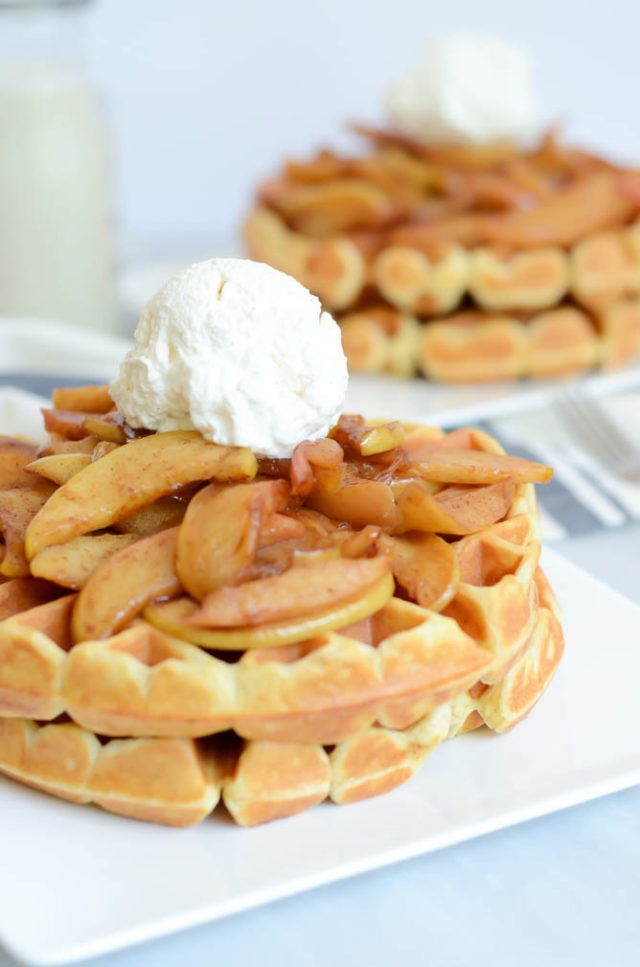 I’m going to blow your mind today! If you’ve never heard of or yet gotten to experience the magic of candy cap mushrooms, that is. I have to admit, it’s taken me quite a while to figure out how I wanted to showcase these little gems here on the blog, but now that I have this recipe for Candy Cap Waffles with Sauteed Maple Apples and Whipped Cream under my wing, I’ll never think twice!

Yes, we’re talking about MUSHROOMS here, and mushrooms that shine their brightest when used in sweet, rather than savory, dishes. Don’t be scared. These things seriously taste like maple syrup. No joke. Which is why I naturally decided to add them to syrup’s ultimate breakfast vehicle – Belgian waffles! 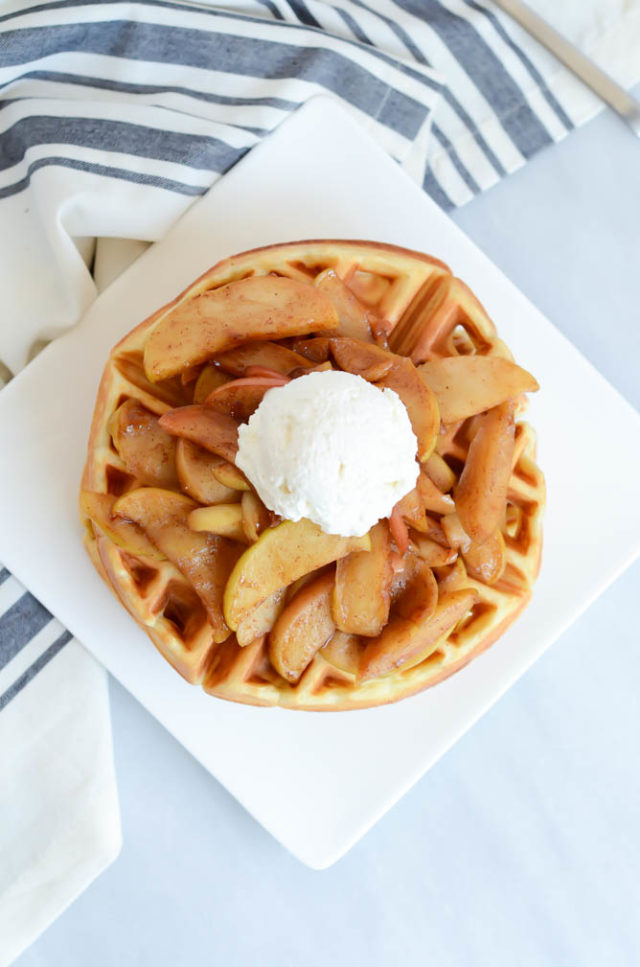 I had heard some buzz about these magical candy caps around the interwebs last year, but I hadn’t really had the opportunity (or motivation) to track some down and try my hand at cooking/baking with them. But my whole outlook changed when my friend and fellow blogger Hana-Lee and I headed up to Napa at the end of last year, and had none other than CANDY CAP CHURROS for breakfast at Sam’s Social Club one morning. We both took one bite and immediately fell in love. The little flecks of candy cap mushrooms that you could barely see speckled throughout the churro dough added such an intense, delicious maple-y flavor, I really couldn’t believe that something so small could have such a big impact on the taste buds. Pretty amazing.

So, I finally had the extra motivation I felt I had been waiting for to give these candy cap mushrooms a shot in my own kitchen, now all I had left to do was track some of these bad boys down. I found a rather large pack of candy cap mushrooms on Amazon (my usual go-to for any slightly “out there” food products that I don’t feel like going on a wild goose chase to find locally) but was still a bit hesitant to make such a big purchase when I had never even cooked with these things before (although I am happy to say that, after the success of these Candy Cap Waffles, I would easily make that investment so I could have them for breakfast every weekend morning from here to eternity.)

It wasn’t until the hubs and I took another trip up to Napa a couple of months later and visited the new Culinary Institute of America site at Copia that I truly discovered what I knew I had been looking for to embark on my candy cap mushroom culinary journey: candy cap sugar!!! That’s right, the cute little store at the CIA was selling sugar that was already infused with small flecks of dried candy cap mushrooms. It started perfuming our car with that heavenly scent of maple syrup as soon as we started driving north to our accommodations for the night. I couldn’t wait to get back in the kitchen and use it! 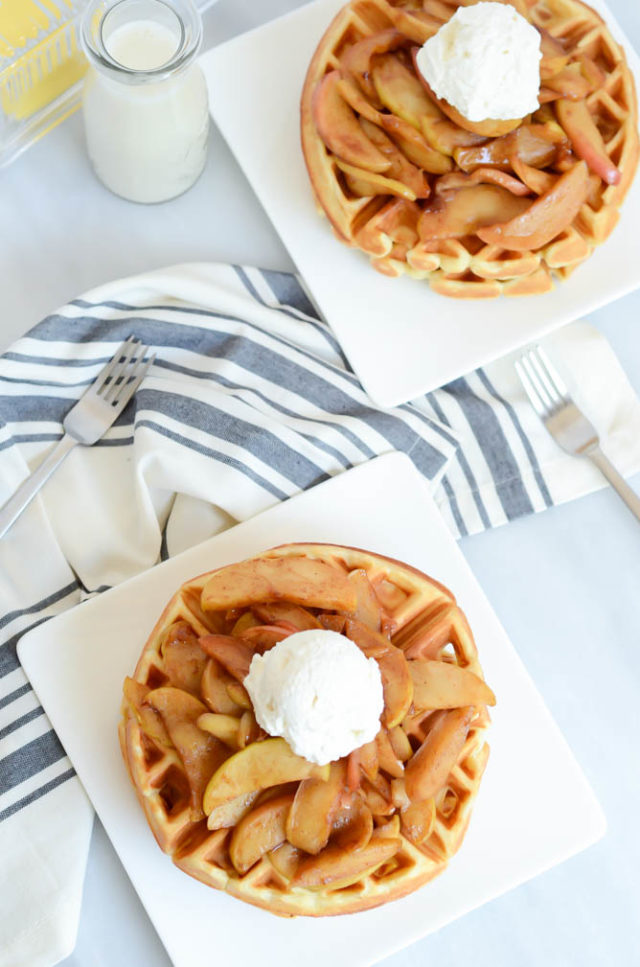 But if you can’t find any candy cap sugar in your neck of the woods (or don’t feel like ordering it here), have no fear, you can easily make your own! Simply get your hands on some dried candy cap mushrooms (like these ones you can get on Amazon) and mix them with ohhhh, about ½ cup to a cup of sugar in an airtight container. Let the ingredients sit and get to know each other for a day or so and you’ll be ready to whip up some Candy Cap Waffles with Sauteed Maple Apples and Whipped Cream just in time for the weekend.

And after some brainstorming and messaging back and forth with some other culinarily adventurous friends, I settled upon these Candy Cap Waffles with Sauteed Maple Apples and Whipped Cream. I’m so glad I did. To be fair, this recipe is nearly identical to a Belgian waffle recipe my mom passed down to me at my cooking-themed bridal shower last year, and yet another thing that has been on my “to-make” list for way too long. I mean, we even got the fancy shmancy Belgian waffle maker to go with it!

It’s not a quick-and-easy recipe, yet it’s not difficult, more just a little time consuming. This is mostly due to the fact that you separate the egg yolks and whites and fold in the stiffened whites at the very end of the batter-making process to yield an incredibly light yet moist flavor. That being said, if you find yourself up early one morning or able to tide the troops over with some fresh fruit or cartoons for a later breakfast, this recipe is TOTALLY worth it. 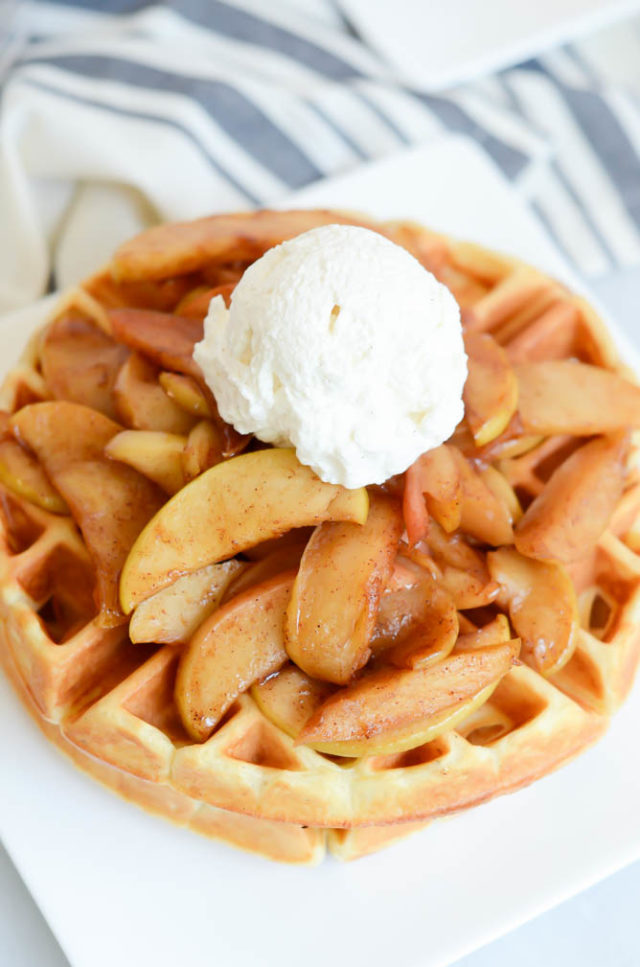 The only change I made to my mom’s recipe to make these Candy Cap Waffles was subbing in the candy cap sugar for the regular amount of sugar called for. It’s only two tablespoons, but that’s all you need to really make that signature maple flavor pop (and make your house smell like breakfast for a good couple of days.)

Oh, and then there are the sautéed maple apples and fresh whipped cream, which you probably shouldn’t skip out on. You see, I figured that since the waffles would already taste like maple syrup, they might need a little more of a three-dimensional topping than just MORE maple syrup. To me, there’s hardly anything better than warm, cinnamon-y sautéed apples gracing the top of a baked breakfast item, so that was an easy solution for me. And whipped cream, well, you’ve just got to!

Once you have the batter made, you’ll be turning out waffles as quickly as your waffle maker’s light turns from red to green. If you’re cooking for a crowd and want to serve everyone at once (including yourself,) simply preheat the oven to 200 degrees Fahrenheit and throw the waffles in, right onto the oven rack, to stay warm while you cook the rest. Be sure not to place them on a baking sheet or paper towel, as this will make them soggy, and no one wants a soggy waffle!

I might also take this opportunity to mention that, conveniently, there is a very special holiday coming up this weekend that perfectly warrants a big batch of these. I mean, what mom wouldn’t want a heaping plate of Candy Cap Waffles with Sauteed Maple Apples and Whipped Cream placed in front of her on Mother’s Day morning? 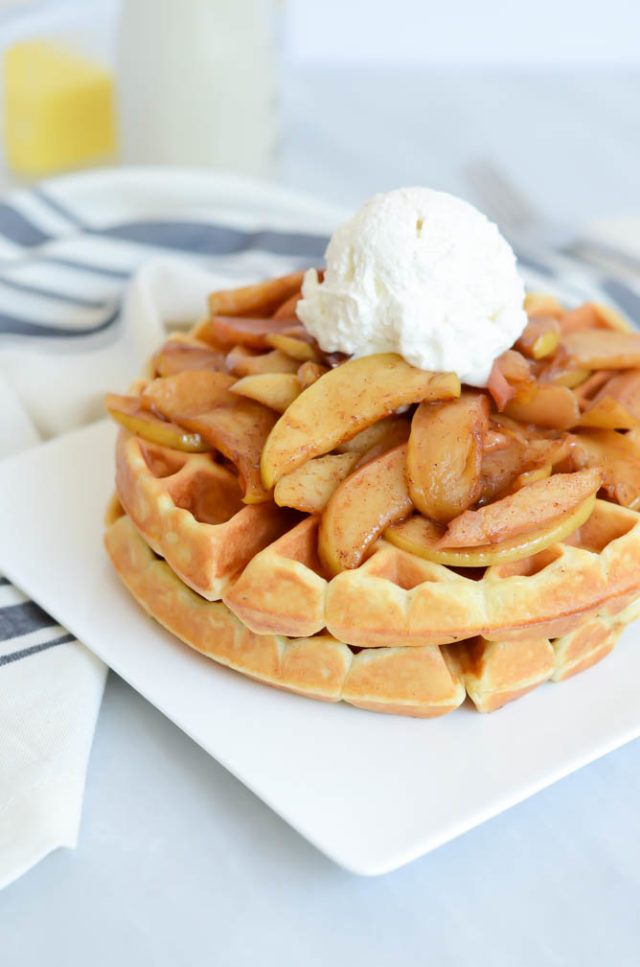 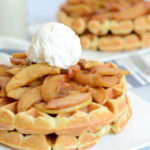