These Maple Apple Pie Stuffed Apples are a delicious, lighter take on the traditional apple pie. A maple, apple and walnut filling is scooped into hollowed apples and topped with a buttery crust. 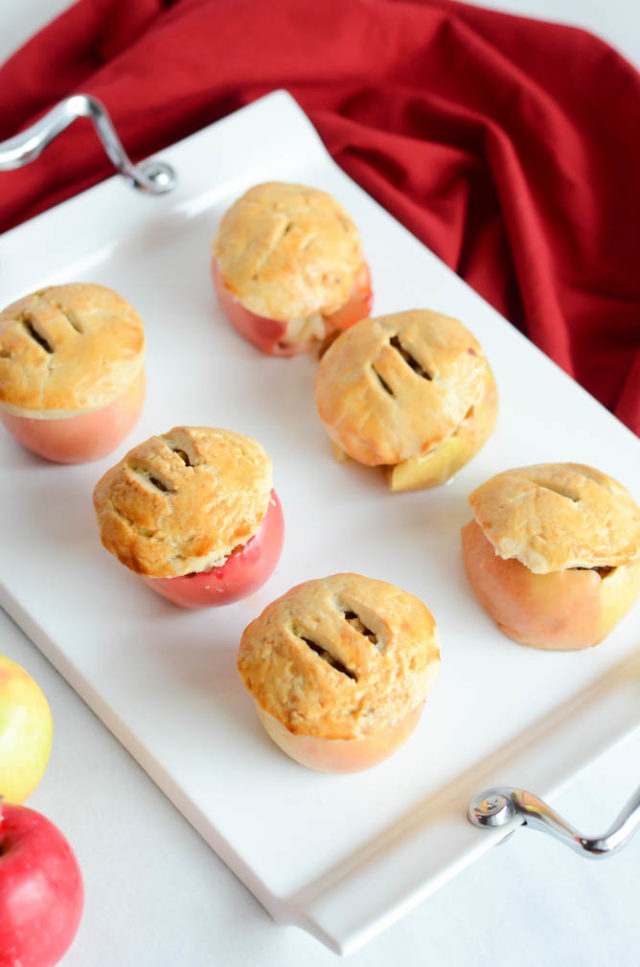 Let’s just write this week off already. In terms of trying to eat healthy, that is. It is the week before Christmas, after all, and all I can think about are sweet treats and all of the little indulgences we get to make in the days to come. These Maple Apple Pie Stuffed Apples are no exception.

Let’s chat about this whole “writing off the week” thing, because I feel like it is soooo important to understand in terms of balanced living, especially at this time of year. You see, when I say we can “write off the week,” I don’t mean that we should go to town on sweets and unhealthy food for every single meal. I simply mean that we should understand that we are in a celebratory time of the year, and we should feel okay with the fact that we might be eating a few more not-so-good-for-you foods than usual.

Take what I ate yesterday, for example. Being a food blogger and culinary consultant (and refusing to waste any food,) I sometimes find myself with a random selection of foods that need to be eaten, whether it’s logical to be eating said food at said time.

Yesterday, I was baking cookies for a blog post and also teaching a candy making class at night. I knew it was going to be a sweets-filled day, so I focused on making sure I got tons of nutrients and healthy foods into my meals in between. Smoothie for breakfast, hummus and turkey meatballs for lunch, and a huge salad with grilled chicken for dinner. This not only gave me energy, but also kept me satiated enough throughout the day that I wasn’t jonesing for a second or third cookie or truffle. 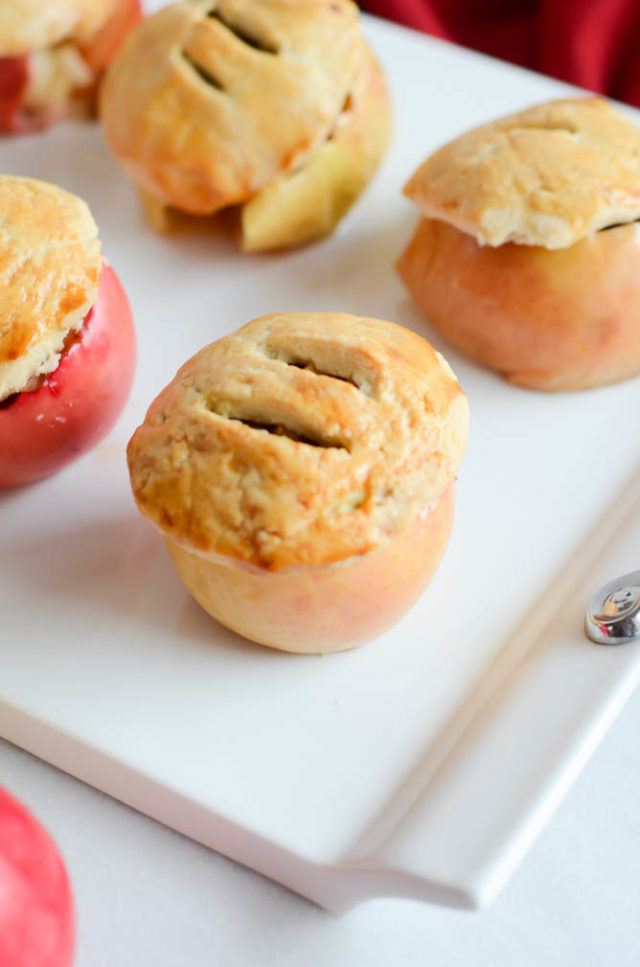 All I’m trying to say is that, even during these cookie or candy cane-filled days, it’s completely possible to stay “fairly” on track, knowing your diet will normalize once we hit the New Year. (Also, don’t skip your workouts! They’ll make you feel so much better when you’re indulging a bit more.)

Which brings me to these Maple Apple Pie Stuffed Apples. These are actually a fairly healthy sweet to enjoy during this holiday season, as we’re substituting the majority of the pie crust for a hollowed-out apple. In fact, I wouldn’t judge if you wanted to enjoy these with a little bit of Greek yogurt for breakfast. Just sayin’.

I’m still working on my pie game, so stuffing a typical pie filling into an apple is the perfect solution for me in the meantime. Plus, we’re upping our nutrient game! But when I say “typical” pie filling, I’m somewhat lying because of course I had to go ahead and glug some real maple syrup in there to really put it over the top. (I did just get back from Quebec City and it’s made me want to add maple to alllll the things.) 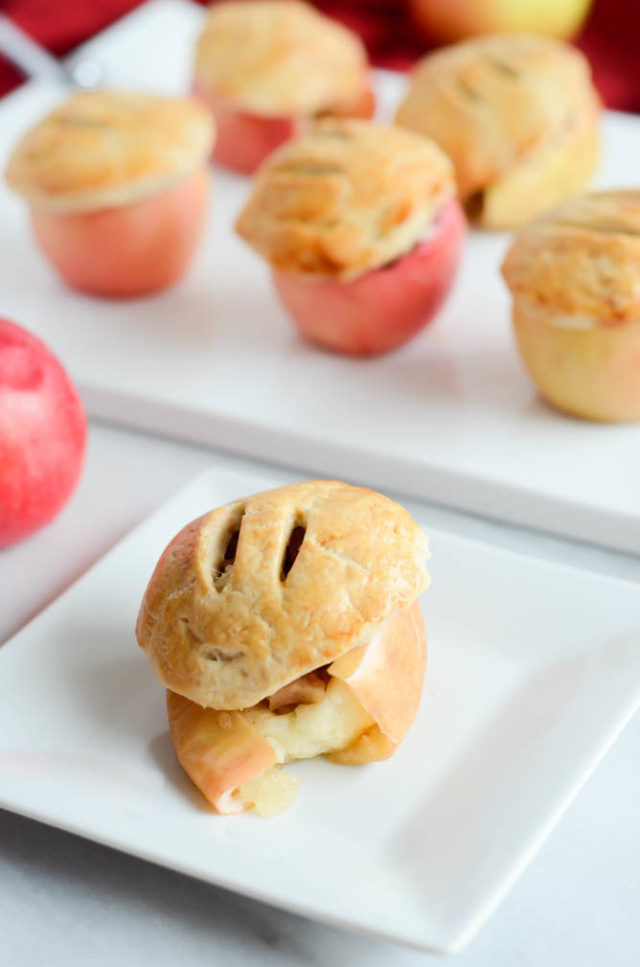 So here’s all you need to do: First step is to whip up some easy pie crust. I just used the same recipe I use for my Cream Cheese-y Pumpkin Pie, substituting maple sugar for the regular granulated stuff (although the regular would also work just fine here.) We want to do this crust first because it needs some time in the refrigerator to chill out.

The next step is to hollow out some Pink Lady apples. This was a little tricky for me at first, but I eventually discovered that the easiest method is to start with an apple corer (without going all the way through to the bottom, or else the baked stuffed apples will get messy!) and then use a paring knife to carve out the rest of the center of the apple. You’ll definitely want to discard the seeds and core, but save any other apple pieces/shavings you get when doing this step, we’ll use them for the filling! 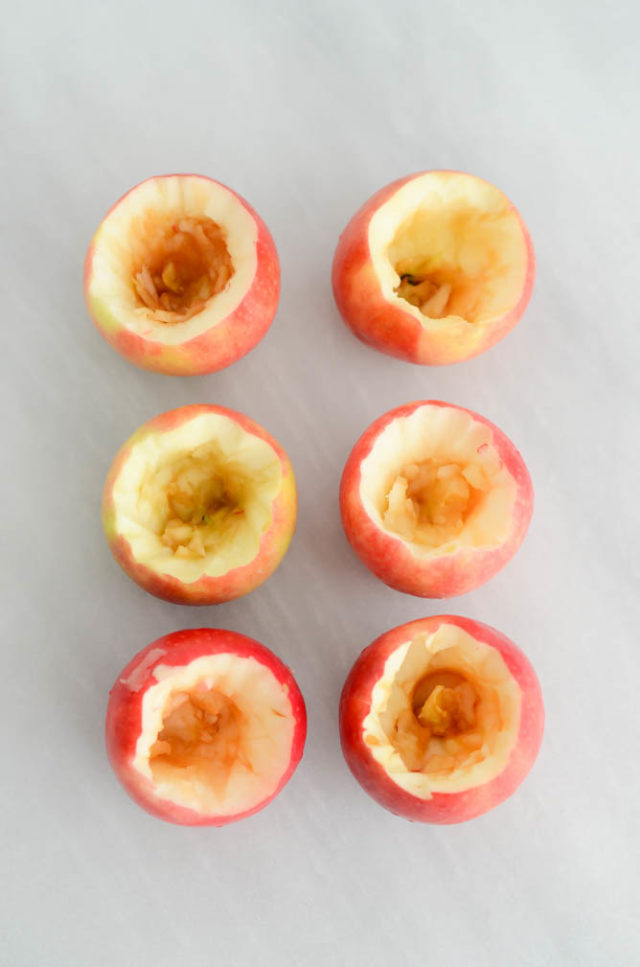 Once our apples are hollowed out, we make the filling. We use the scraps mentioned above, as well as one more Pink Lady apple, and saute them with some toasted walnuts, maple syrup, brown sugar and spices. We scoop the filling into the apples and then cover them with disks of our rolled out pie dough. 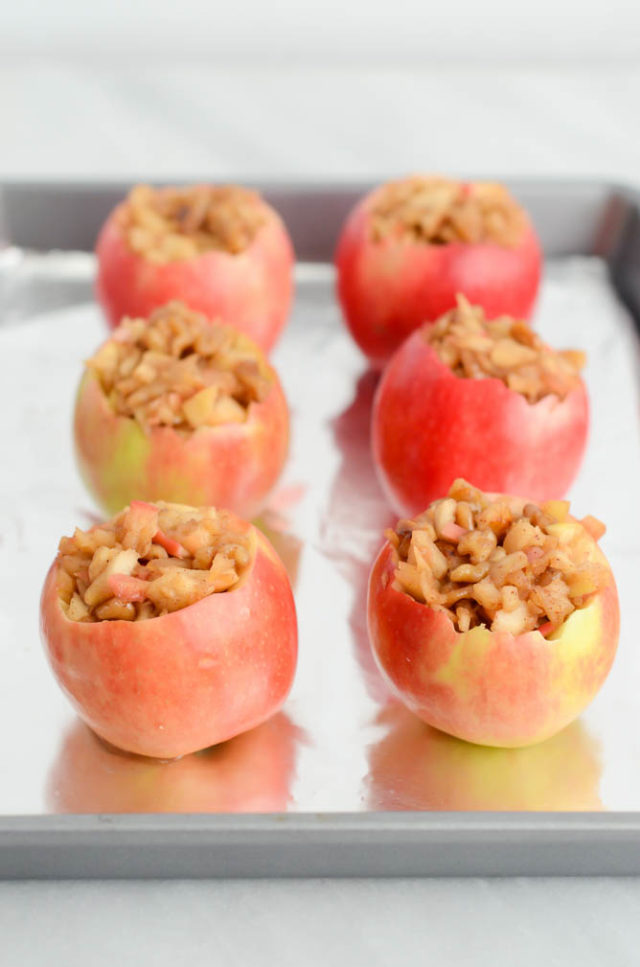 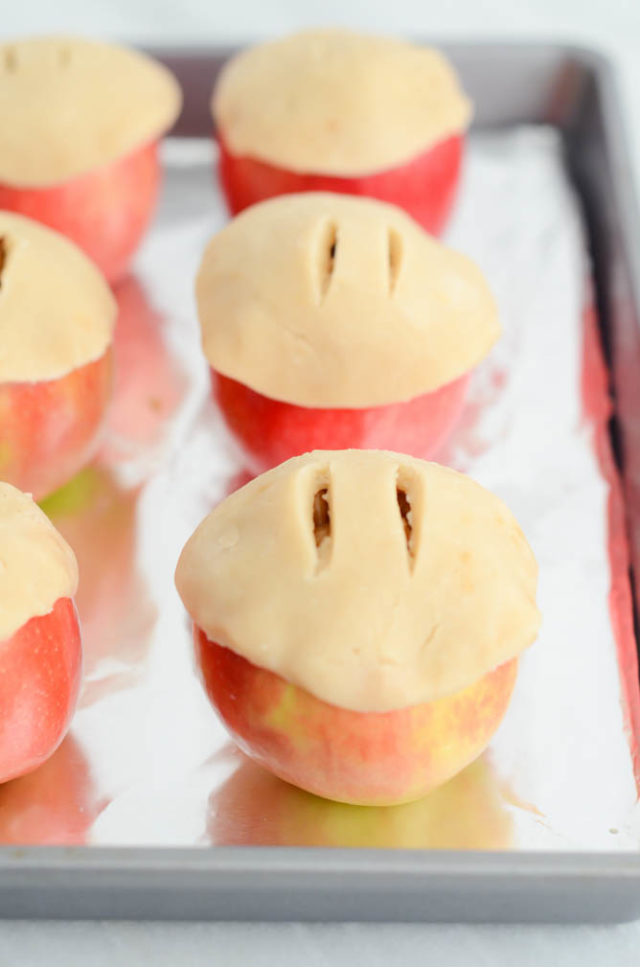 I had some extra filling and dough (my apples were a bit small) so I also made some apple pie pockets, basically taking two of the pie disks, stuffing them with a scoop of the filling and pinching them together. Kind of like a hand pie! 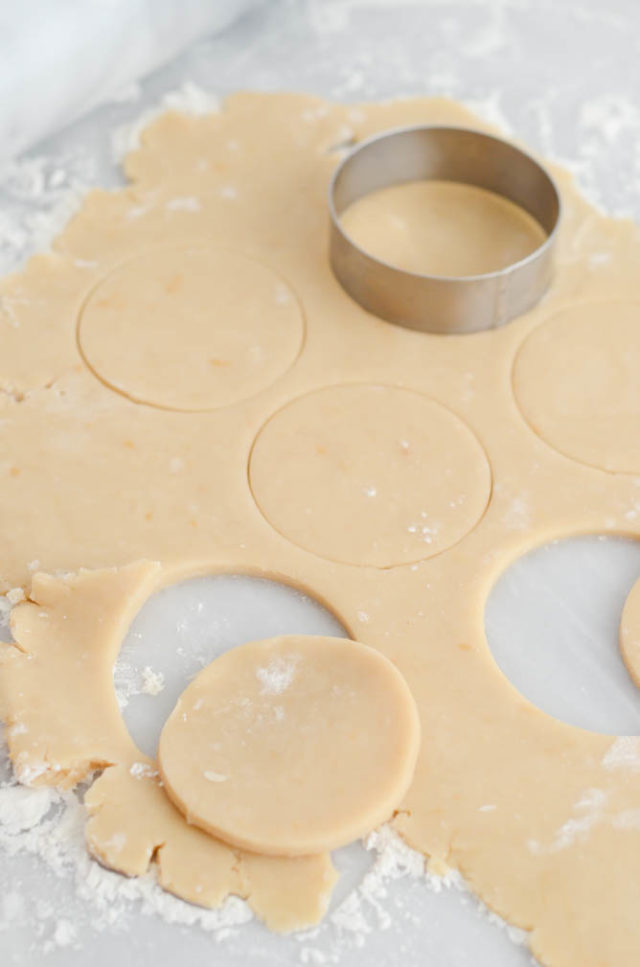 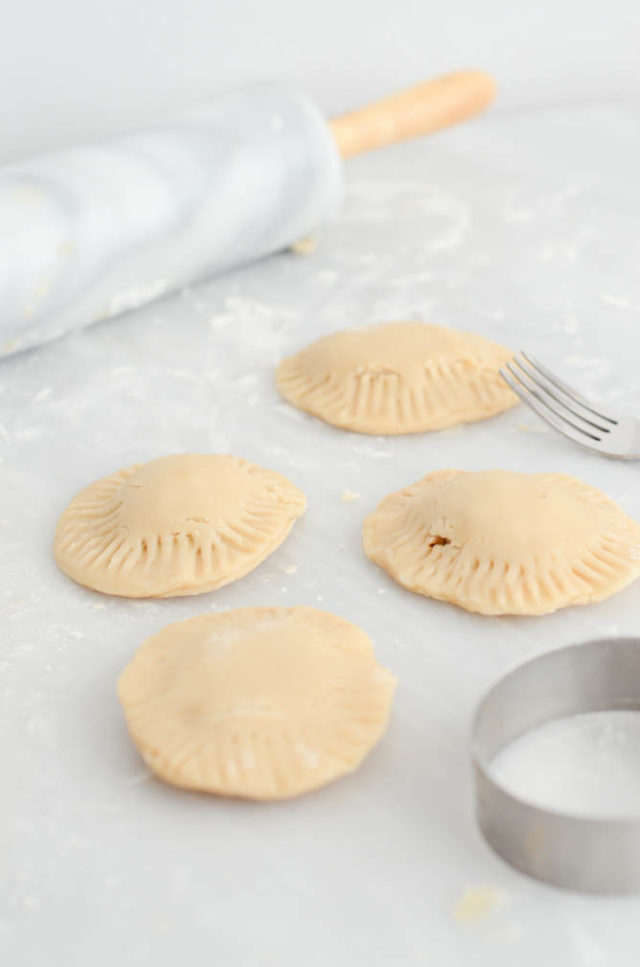 A quick egg wash and a 25-minute turn in the oven and you’ll have perfectly golden, sweet, tart and juicy Maple Apple Pie Stuffed Apples ready for breakfast, dessert or a quick snack. Who said indulgent had to be unhealthy? 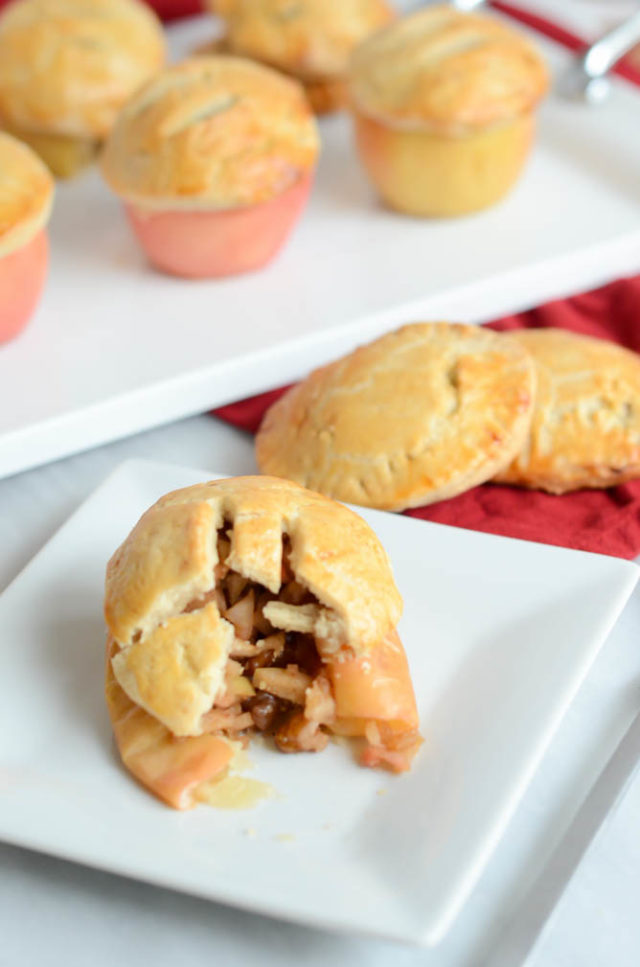 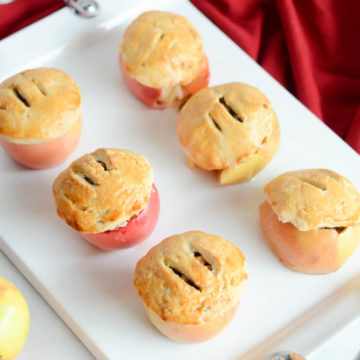 Cutest little apple pies you ever did see!