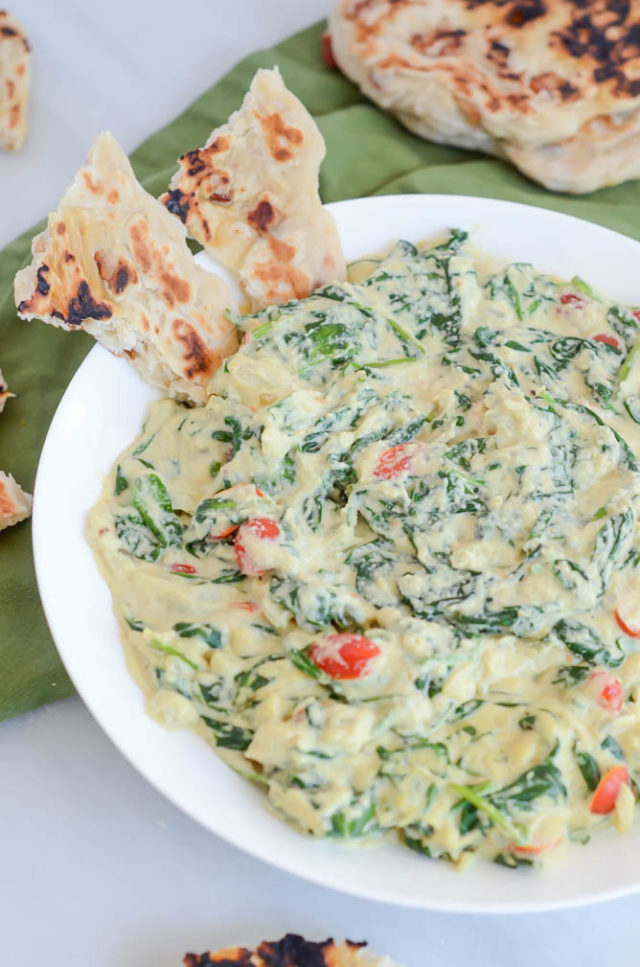 Sometimes I just don’t know how I come up with certain things. Take this Creamed Curried Spinach with Bacon Naan, for example. I suppose it’s not too surprising that I paired a creamy, vegetable-laden, curry-laced dip with everyone’s favorite Indian carb, but I’m not too sure adding chunks of bacon to the bread is really staying in line with the traditional flavors of that culture. Oh well, that’s what cooking is all about, right? Taking already established, delicious dishes and turning them into your own?

And let me tell you a little story about bacon, and why I feel compelled to add it to just about everything I cook these days (in small amounts, that is.) You see, one of my hubby’s best friends has a family hook up with a local butcher in the Bay Area, and for my hubby’s bachelor party he literally brought all. the. meat. We’re talking tomahawk steaks, ham steaks, sausages and, of course, bacon. It was LITERALLY a sausage fest. My hubs came back raving about this bacon, and the next time we were up visiting his friend we snagged a small pack to bring home with us.

Fast forward a few months, to Christmastime, and we had mentioned to his friend that we were due for a replenishment of our bacon stock. We show up to his parents’ house on Christmas Day, and he literally goes into the garage and comes back with a 15-POUND box of this bacon for us.  So we’re basically set with bacon for life, or at least for the foreseeable future. Thank goodness for plenty of freezer space!

Needless to say, we always have some on hand so I couldn’t help but add a little bit to the naan I was making for this Creamed Curried Spinach. (I must also mention that I was partially inspired by our favorite little spot in Napa, Model Bakery, and the bacon bread that’s regularly part of their daily homemade bread selection.) Let me tell you, the end result is nothing short of spectacular. I adapted the naan recipe from this one I found on Girl Versus Dough, basically just adding in the bacon and using my stovetop griddle instead of the gas grill outside. The end result is a chewy and moist naan that holds up extremely well to the whole dipping and scooping up the creamed spinach process, yet melts in your mouth save for the slight salty crunch of the bacon. Delish. 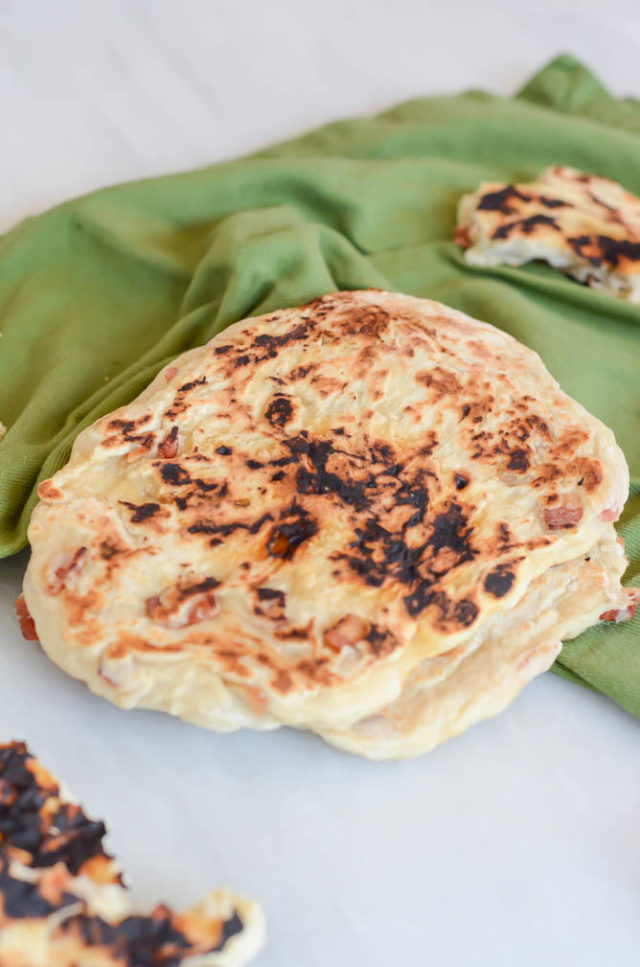 So now that we’ve talked about the bacon naan, I’ve also GOT to tell you about this Creamed Curried Spinach because it is out of this world. First of all, this part of the dish is completely vegan. Do you believe it? Well, if I told you I used my trusty cashew cream as a base I bet you would. Seriously, I don’t think there’s any sort of cream sauce that vegan sub can’t stand up to. So, if you’re vegan, I strongly urge you to give this a shot, and simply find (or make) some sort of substitute for the bacon naan. 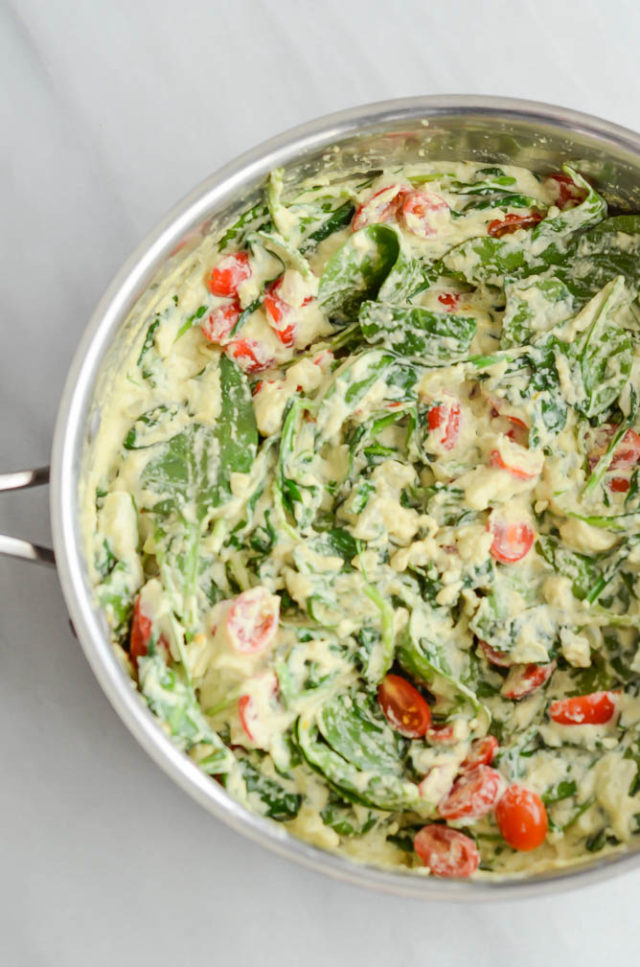 Okay, back to our Creamed Curried Spinach with Bacon Naan. When making the cashew cream this time around, I simply added a hefty dose of curry powder instead of nutritional yeast. I then stirred it into some wilted onions, garlic, and spinach, and fancied it up with some fresh cherry tomatoes and a dash of red pepper flakes. The result was so creamy and bursting with flavor, I really am giddy with excitement for you to try this.

All glowing reviews aside, I do realize that Creamed Curried Spinach with Bacon Naan is not the most photogenic, but PLEASE do not let that stop you. You will be incredibly sorry if you do. Most Indian food involves dipping into a blurry blend of exotic herbs, spices and sauces without silverware, and this is no exception. Use your bacon naan as your spoon and really get in there and shovel some hefty scoops straight into your mouth. I’m pretty sure once you start eating this you’re not going to be able to stop, so get after it! 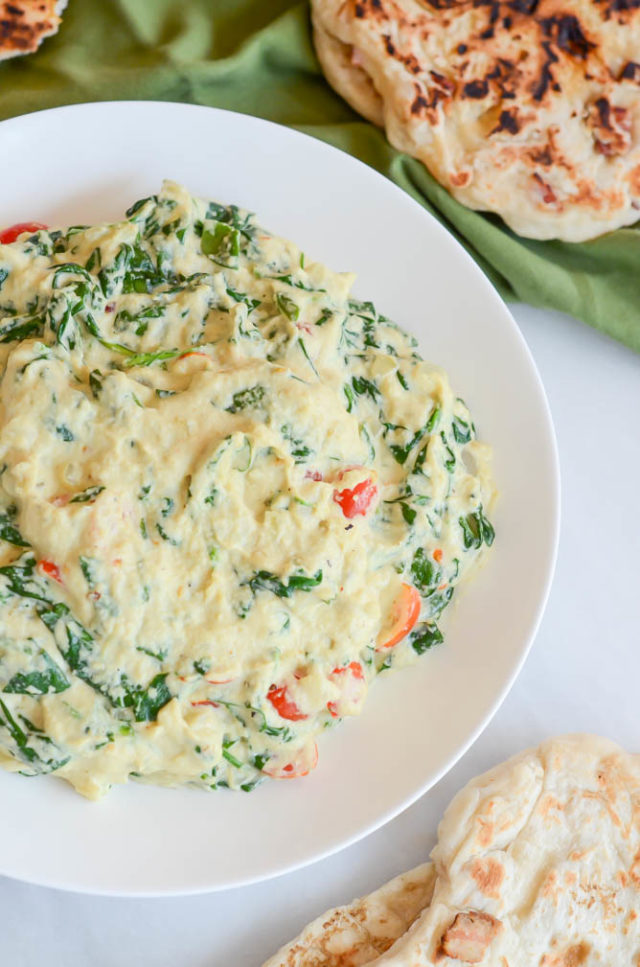 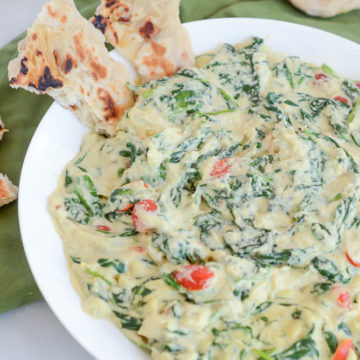 For the bacon naan:

For the creamed curried spinach:

The Bacon Naan recipe was adapted from the No-Knead Grilled Naan recipe on Girls Versus Dough.