Ain’t no party like a #virtualpumpkinparty!! I hope you’re ready to be completely overwhelmed with all things pumpkin today, because boy have I got sooo much of it coming right at ya, starting with these completely indulgent and naughty Pumpkin Praline Cinnamon Rolls with Bourbon Cream Cheese Frosting. Because ‘tis the season, right?

Sometime last year, I stumbled upon my friend Sara’s blog and immediately subscribed because, well, it’s called Cake Over Steak after all…My kind of woman! It was just shortly after I subscribed that Sara (along with a fantastic gaggle of other food bloggers) sent out the links and recipes for the 2015 #virtualpumpkinparty and I KNEW I had to be a part of it this year.

Well, I’m happy to report that this year’s #virtualpumpkinparty is bigger and better than ever, with just shy of 100 bloggers contributing recipes involving all things pumpkin. You can check out the links to all of the other recipes below, but first, let’s start with the amazingness that is these Pumpkin Praline Cinnamon Rolls with Bourbon Cream Cheese Frosting. 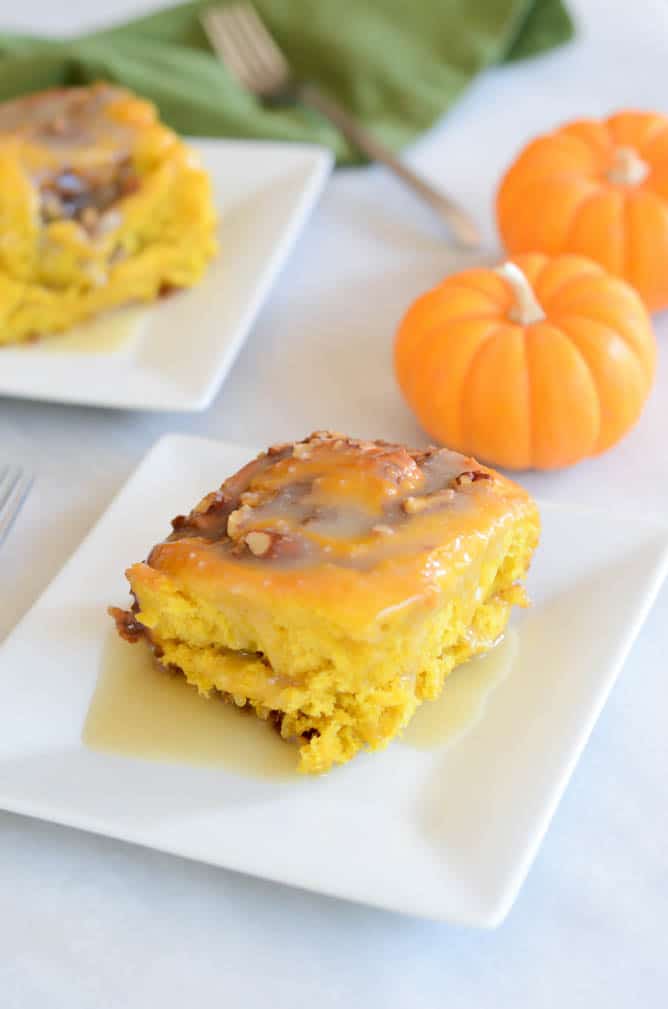 If you know me (or have been reading this blog for some time) you’ll know I’m all about that balance. There’s a time and a place for everything, and even though I enjoy healthy, whole foods 80-90% of the time, I REALLY take advantage of that 10% of the time that I leave for being indulgent. And what better time for being indulgent than for a #virtualpumpkinparty? To me, there seems to be no better excuse.

Even though this is the first time I’ve shared a cinnamon roll recipe on the blog, these warm, yeasty breakfast treats are nothing new to me. You see, my Dad’s been on a big cinnamon roll kick for, oh, the past year or so.

But we’re not talking any cinnamon rolls. No, that would be way too #basic for Dad. We’re talking the likes of Caramel Apple Cinnamon Rolls, Sticky Bun Cinnamon Rolls, etc. So I took advantage of the few days I spent up with them in Santa Cruz a couple of weeks ago and tapped into my Dad’s expertise to create the recipe for these ever-so-scrumptious Pumpkin Praline Cinnamon Rolls with Bourbon Cream Cheese Frosting. 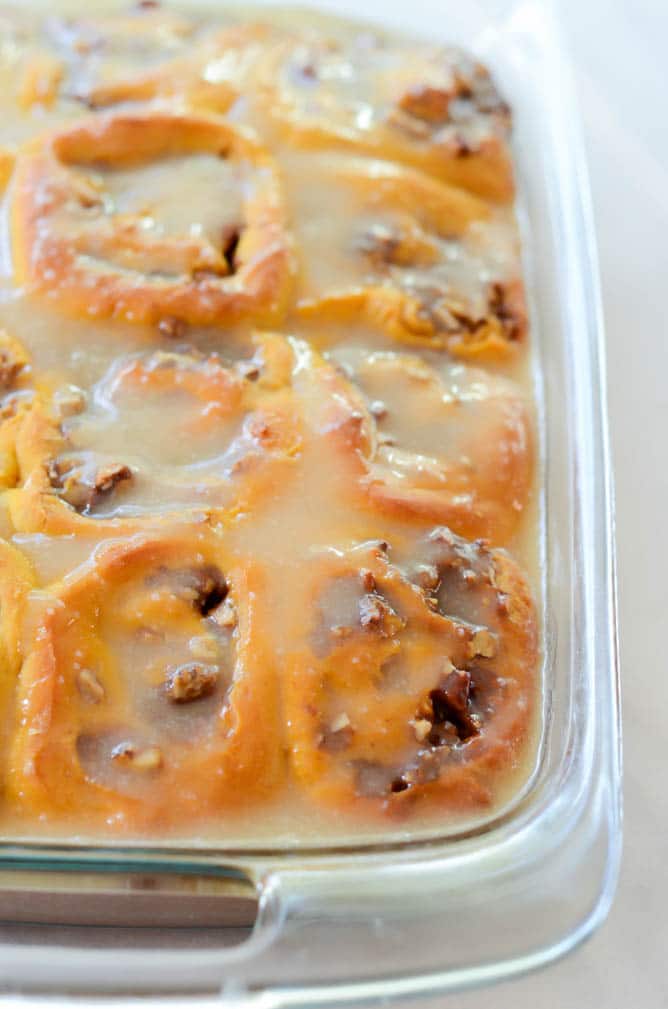 These rolls are the ultimate special treat for Halloween morning, or for coming out of your tryptophan-induced food coma the day after Thanksgiving. Even better, there’s no need to find a warm place in your house for these to rise, you simply form the cinnamon rolls, place them in whatever dish you’ll be using to bake them in, cover them and pop them into the refrigerator to rest overnight. In the morning, all you have to do it preheat your oven and pop them in for 35-40 minutes. Whip up the Bourbon Cream Cheese Frosting while they’re baking, and breakfast is ready!

Your family or significant other will wake up to the smell of freshly baked Pumpkin Praline Cinnamon Rolls and any worries of family drama or arguments or trying to avoid Aunt Jane will be gone. 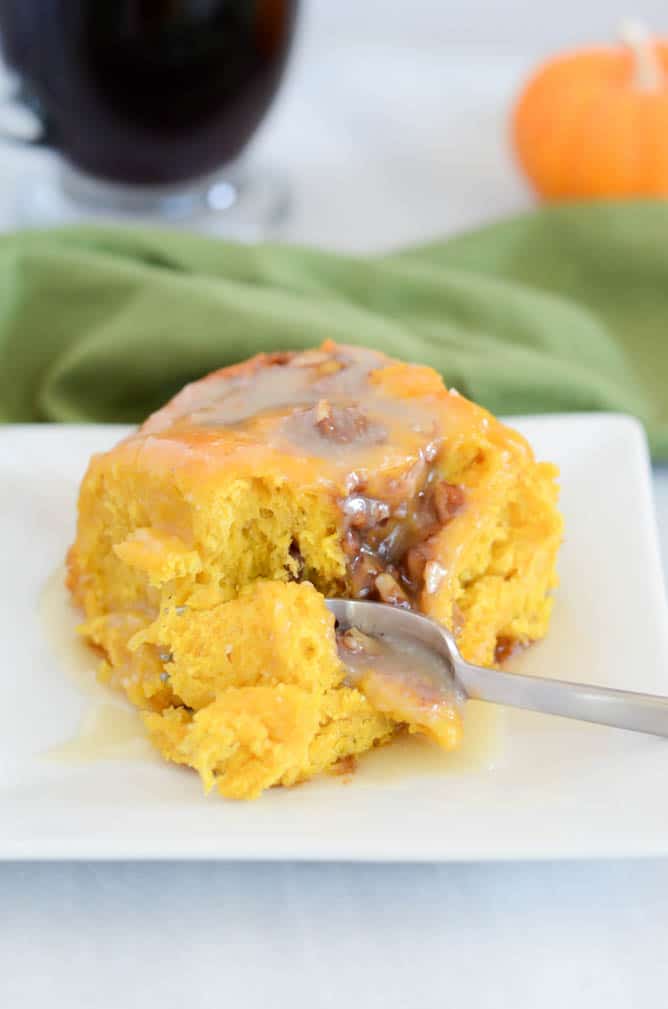 Now, this is a yeast bread, but don’t be scared off quite yet. If this gal (points to self) can make these fluffy bites of bourbon-glazed heaven, so can you. I highly recommend using a KitchenAid stand mixer for making the dough, but I suppose you could just as easily make it the old-fashioned way – using your hands! Even if you do use the stand mixer (this is the one I use) you’ll be turning the dough out onto a floured surface to finish kneading and roll out to spread on the filling.

Speaking of the filling – oh, the filling! This is absolutely my favorite part (well, aside from the pumpkin in the dough and the bourbon in the frosting 😉 We first make somewhat of a caramel by combining brown sugar and butter and just a dash of corn syrup in a saucepan on the stove. Once the mixture is well on its way to being a cohesive filling, we stir in chopped pecans to complete the “praline.” It’s the perfect sweet and crunchy accent to the rich pumpkin dough. 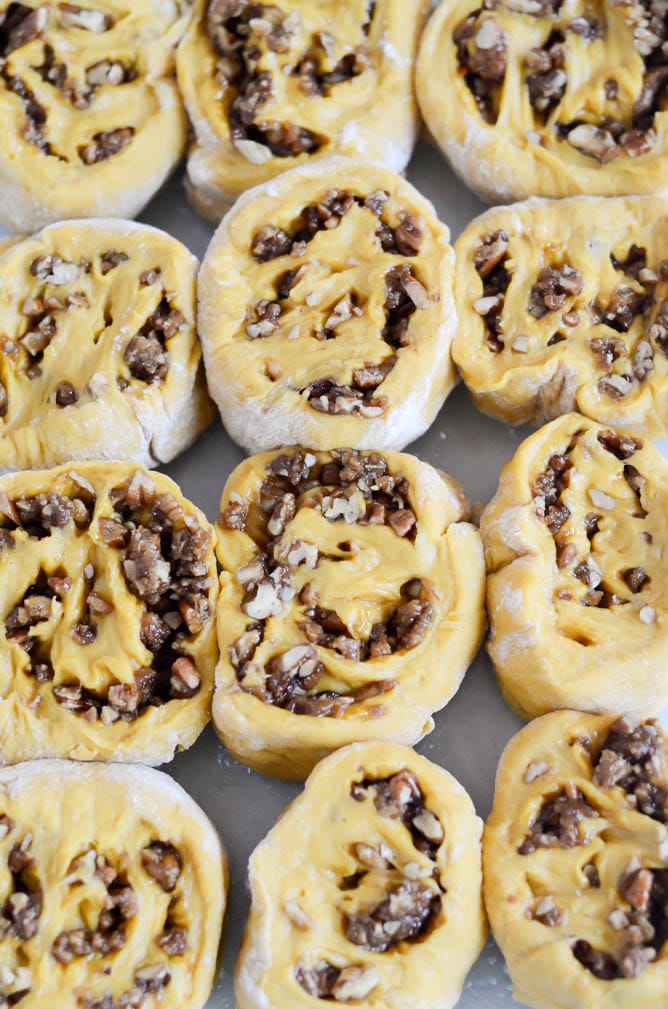 Once you have the dough rolled out and the filling spread on, you’re nearly there! Simply roll up your dough into one long log, slice it into 1 ½-2 inch pieces, and tuck the pieces neatly into your baking dish. You might have some extra end pieces that you can’t fit into the 9×13-inch pan, I put the odds and ends into a separate loaf tin to bake (and nibble) on the side. 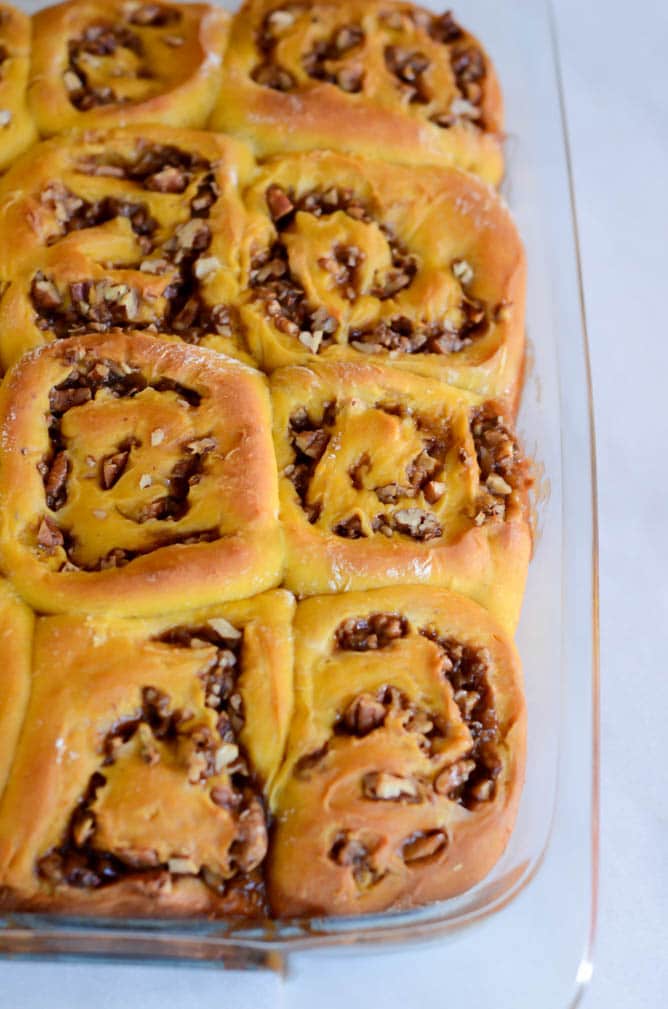 After you’re done baking the rolls and making the glaze in the AM, all there’s left to do is to put the two together. Don’t be shy here, you want that Bourbon Cream Cheese Frosting all over and around each and every one of your Pumpkin Praline Cinnamon Rolls. I won’t tell if you decide to double the recipe, we only have a #virtualpumpkinparty once a year after all! 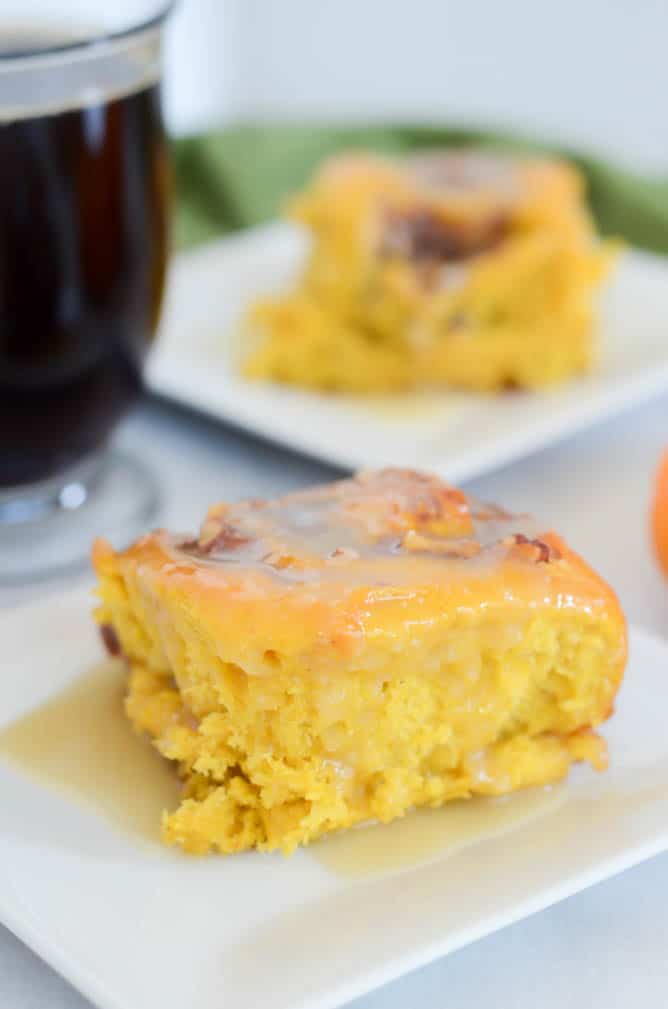 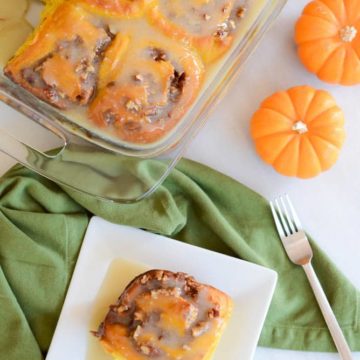 For the praline filling:

Now sit down to a hot cup of coffee and a Pumpkin Praline Cinnamon Roll with Bourbon Cream Cheese and click on the links below to find the recipes from all of my other blogger friends!