This Banana Peach Breakfast Quinoa with Cinnamon Sugar Pecans takes the protein-packed superfood – quinoa – and loads it up with peaches, bananas and cinnamon sugar pecans! 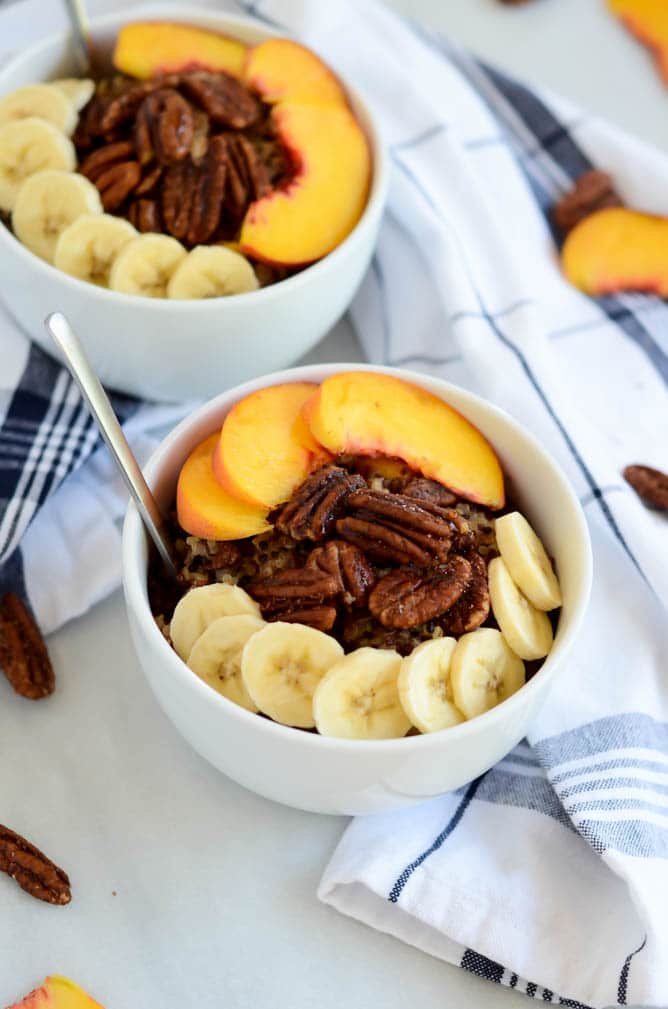 Summertime comfort food right here. THE best. I know it’s sometimes hard to think about turning on the stove in the heat of summer but, since this Banana Peach Breakfast Quinoa with Cinnamon Sugar Pecans is your first meal of the day, you can essentially get all of the cooking out of the way before the high temperatures set in. Plus, you’ll have a happy belly to boot!

That’s right. I’m calling this summertime comfort food for a reason. This breakfast quinoa is comfort food in the best way possible: It’s incredibly filling and is a healthy, complete breakfast that will get you geared up and ready to conquer anything that will be thrown your way that day.

Case in point: I have been busting my booty the past few days getting all of the finishing touches done for our wedding (two days away now!!!!!) Once I get started in the morning, I’ve hardly been having time to think about eating until the sun starts to set and I realize I should probably eat something to avoid waking up as the hangriest person ever the next day. This Banana Peach Breakfast Quinoa has been giving me the energy I need to get through the day, even if I forget to stop for lunch. (And, if I happen to wake up as the hangriest person ever, my mood is quickly remedied by a big bowl of this deliciousness.) 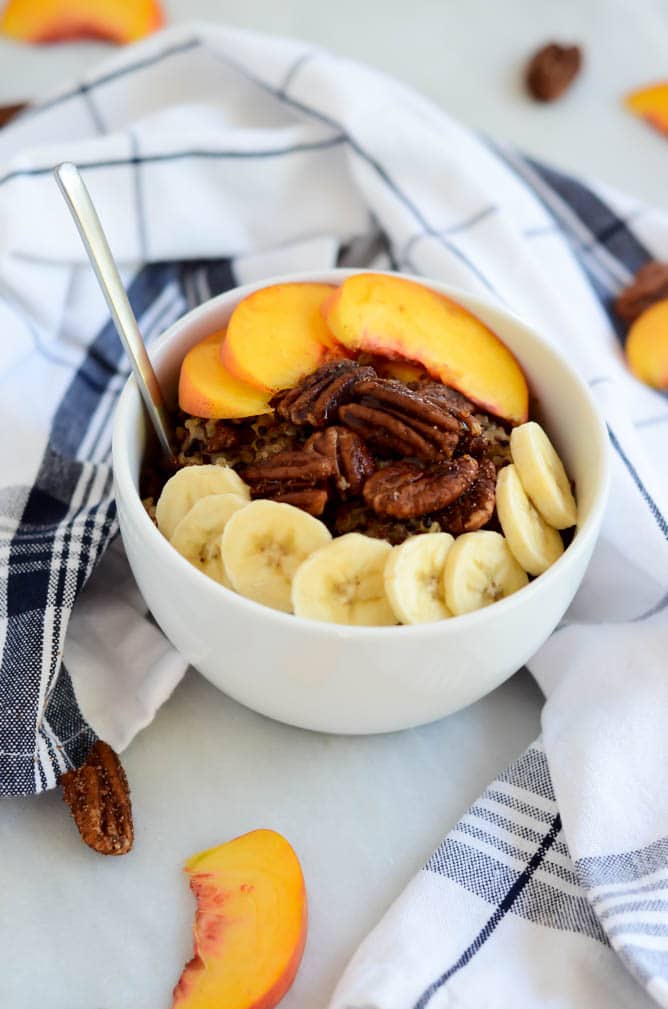 So, back to this hangry remedy. We all know that quinoa is a complete protein (that also happens to be gluten-free), and we amp the protein factor up in this dish even more by cooking the healthy grain in vanilla-scented coconut beverage. Stirring in just a touch of real maple syrup finishes off the base of our Banana Peach Breakfast Quinoa with Cinnamon Sugar Pecans, giving us a hearty, tropical, and perfectly sweetened flavor to add even more deliciousness to.

This additional deliciousness comes in the form of fresh bananas and peaches, because I don’t know about you but right now the peaches here in Santa Barbara are on point and I want to add them to everything. The icing on the cake (or topping on the quinoa?): cinnamon-sugar pecans. You guys, why haven’t I thought of this earlier? Seriously, so good, and the perfect addition to any and all breakfasts, lunches and dinners (I’m most specifically thinking these would be a fantastic addition to any salad. Yum!) Plus, they add even MORE protein to this already protein-rich dish and some delicious crunch to balance out the creaminess of the quinoa. 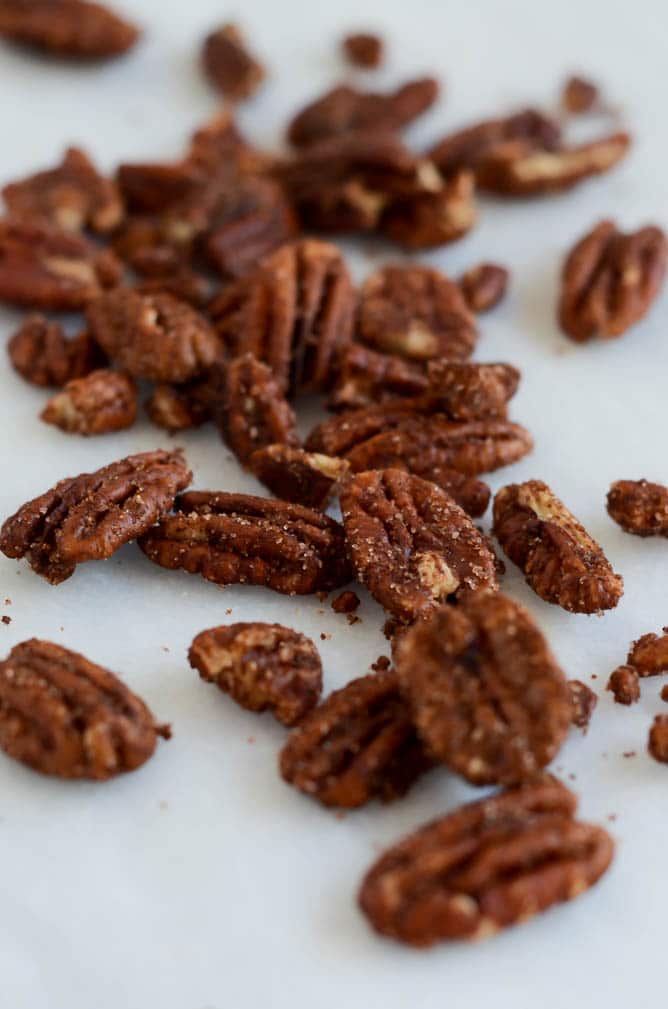 Here’s the long and short of it (it’s so easy!)

Toss some pecans in coconut oil and cinnamon-sugar and roast ‘em up.

Cook up the quinoa in our delicious maple-vanilla coconut beverage blend.

Stir in some fresh bananas and peaches.

Top with even more fresh bananas, peaches and, of course, cinnamon sugar pecans. 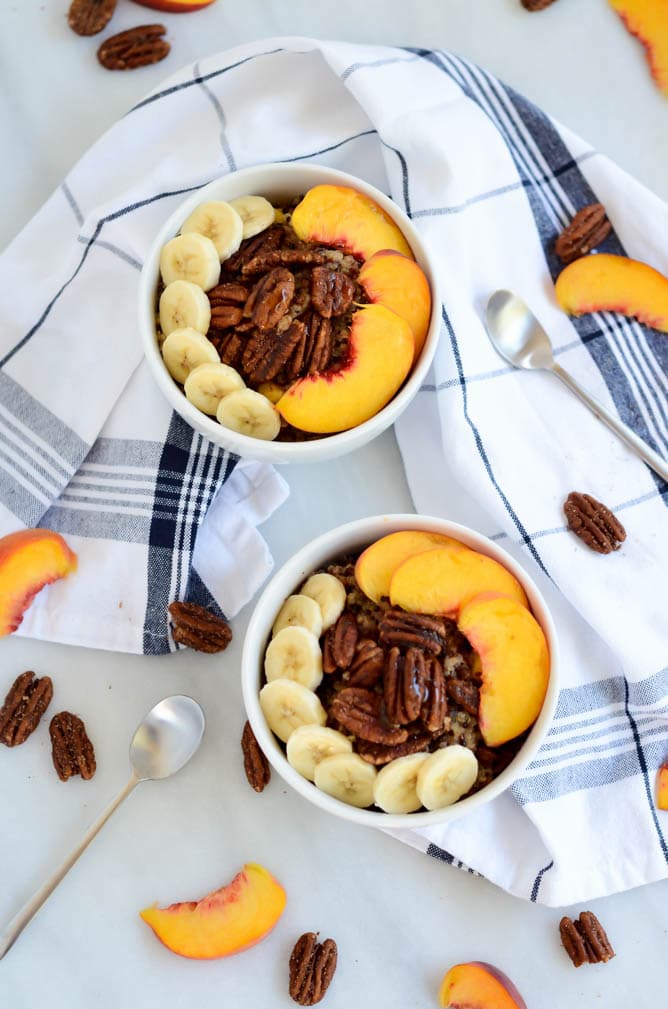 Easy as that and sooooo delicious. Seriously, I’d only explored the “breakfast quinoa” route once before, and that was years ago. Why had I forgotten about it? I can’t wait to come up with even more variations to share with you in the future.

But, for now, how about I go get married? That’s right, we leave today for Sonoma and tie the knot on Friday! We’ll stay in Sonoma for a couple of days of “unwinding” with family after the wedding (is there such a thing?) and then we fly out for our honeymoon in Belize! But don’t worry, I’ve got lots of great content scheduled to share with you while I’m away. And be sure to follow me on Instagram and Snapchat (user name: @caligirlcooking) to see all of our fun wedding and honeymoon adventures! XO 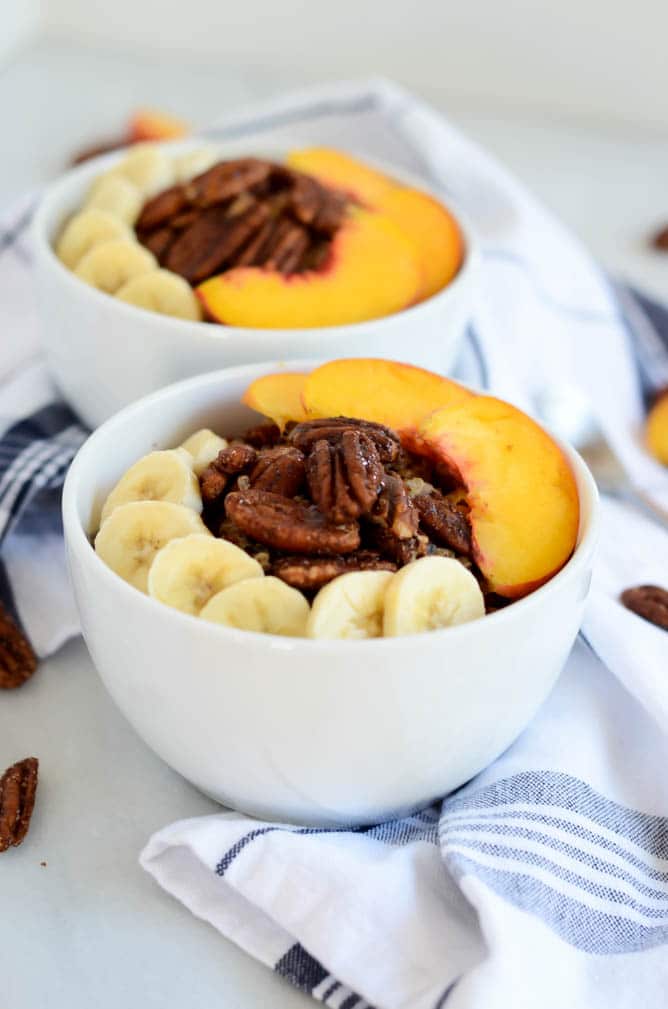 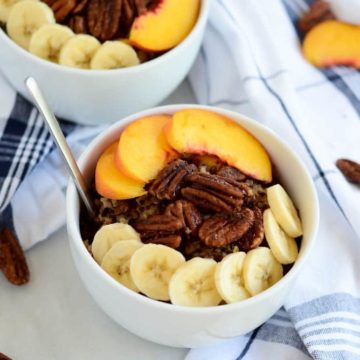 Save any extra cinnamon sugar pecans in an airtight container to use on salads and other delicious dishes!

You just can’t be hangry looking at this…