This Pistachio Cake with Dark Chocolate Buttercream is perfectly dense and moist, made with real pistachios and topped with a decadent homemade dark chocolate buttercream. 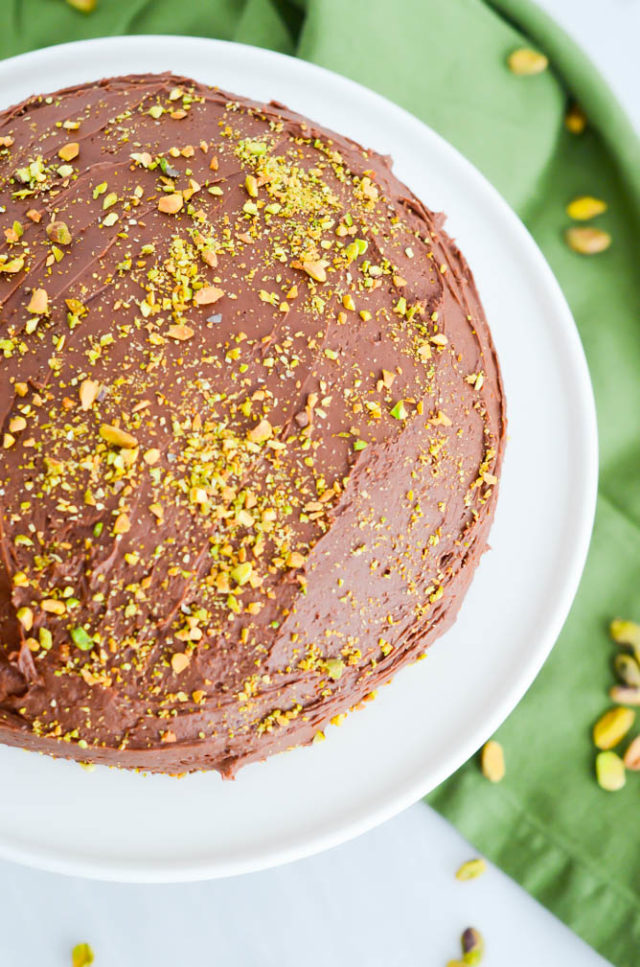 This Pistachio Cake with Dark Chocolate Buttercream just MIGHT become the one and only “everyday” cake I make forever and ever and ever…It’s dense and moist, with REAL pistachios (none of that pistachio pudding or flavoring) and the richest, most decadent dark chocolate buttercream that has ever graced the bowl of my stand mixer. It is that good.

Let me tell you a little story about how this cake came to be. I often have people asking me if I ever run out of ideas, how I come up with my ideas, etc. The answers: no, I have not run out of recipe ideas (yet, I have two running lists that I am constantly adding to and working off of) and recipe ideas come to me every day, everywhere, at the most unexpected times (hence why I have a list of ideas on my phone and another list in my Google docs.)

This particular idea for Pistachio Cake with Dark Chocolate Buttercream was actually inspired by one of my favorite Trader Joe’s trail mixes, Happy Trekking, which is full of almonds, cashews, cranberries, cherries and, yes, pistachios and dark chocolate! Whenever I’d be mindlessly munching on the mix, I’d stop for a second and savor every bite I got that had that heavenly combo of pistachios and dark chocolate. So, I figured why not make a delicious baked good that featured those two perfectly partnered flavors? 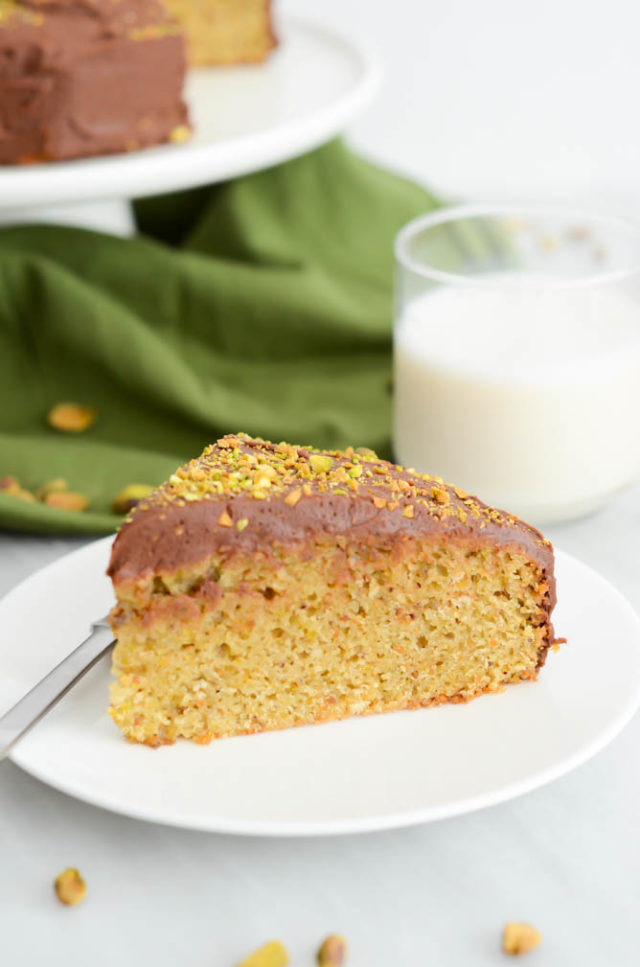 The result was AMAZING and I really hope this flavor combo takes the world by storm, because everyone should be exposed to life-changing things such as Pistachio Cake with Dark Chocolate Buttercream.

I originally thought about making this into a cupcake recipe (which you can certainly do, simply bring down the baking time to 18-20 minutes) but then I realized I haven’t really ever posted a full-on CAKE recipe on this here bloggy blog. There were times that I debated making this one of those fancy two- or three-layer cakes with thick slabs of frosting in between each layer, but in the end I decided to keep it simple and less intimidating. I wanted this to be a cake that you can enjoy a slice of (without guilt) every day, rather than having to save it for a special occasion.

The other thing was that a MUST for this Pistachio Cake with Dark Chocolate Buttercream was using real pistachios rather than the green pudding mix or other artificial flavoring. I wanted to keep the flavors as close to the trail mix as possible. I did some quick Internet research and found this method on AllRecipes for grinding toasted pistachios with a bit of sugar and then folding them into the batter at the end, which worked out perfectly! Highly recommend. 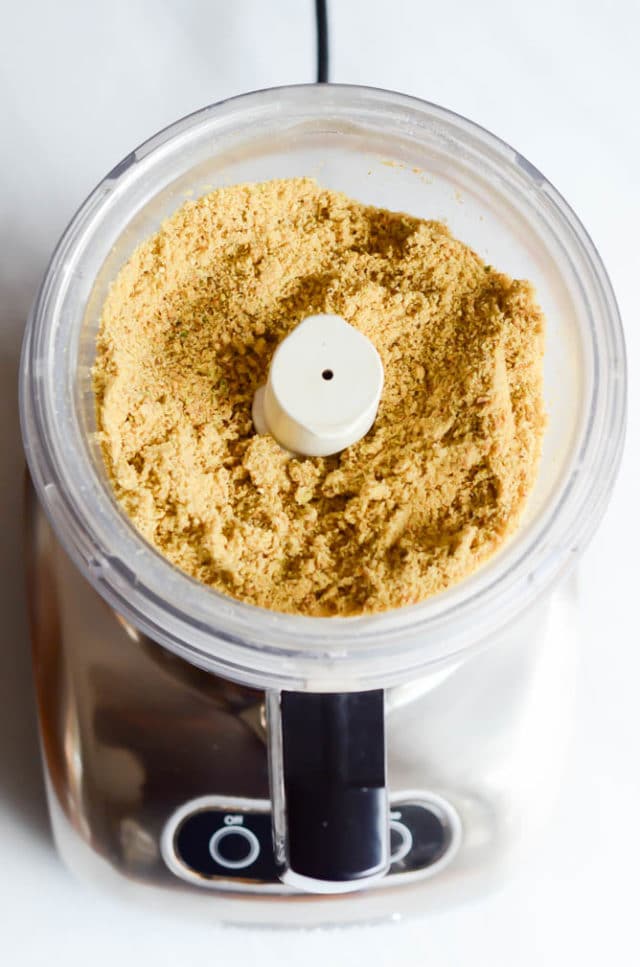 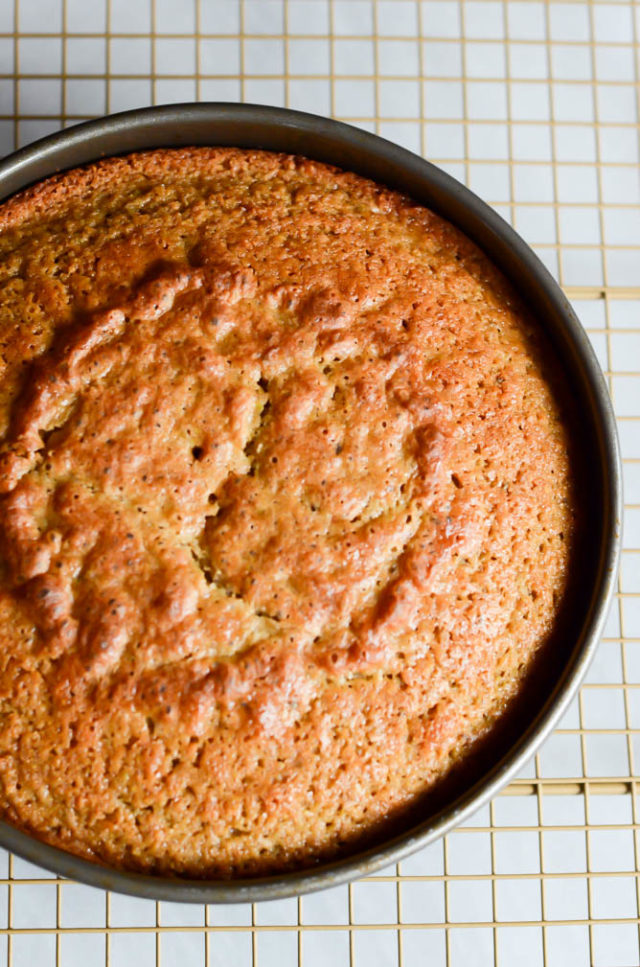 I then used a very similar method for both the batter and buttercream that I used for these Chocolate Stout Cupcakes with Irish Cream Buttercream, changing a few things up here and there to fit the flavor profiles I was looking for.

The cake comes out incredibly dense and moist which is, to me, the best kind. In fact, if you left off the Dark Chocolate Buttercream, I’m pretty sure you could get away with calling this a perfectly acceptable breakfast cake. Since we’re keeping it simple, I just used an 8-inch round cake pan which make the cake come out nice and thick. 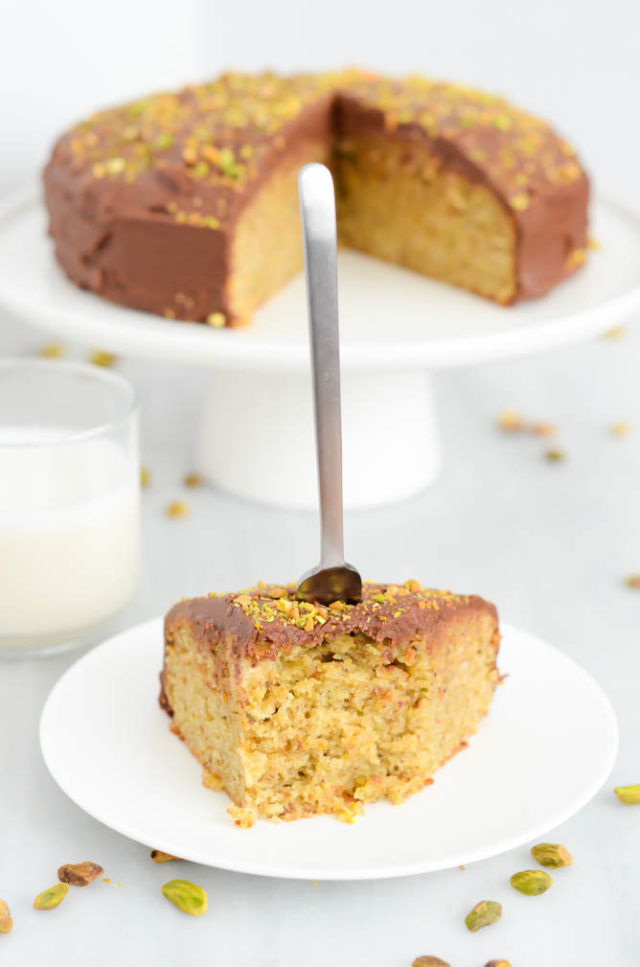 I made both the cake and the buttercream a day in advance, and frosted it on the morning I wanted to serve it. Just be sure to let the frosting come to room temperature before you try and spread it, or else you’ll end up with a mess and a not-so-pretty Pistachio Cake.

This Pistachio Cake with Dark Chocolate Buttercream comes together fairly quickly and easily, which means it would be super easy for you to whip up as a special humpday treat. Who doesn’t need some pistachios and dark chocolate to get you through the week? 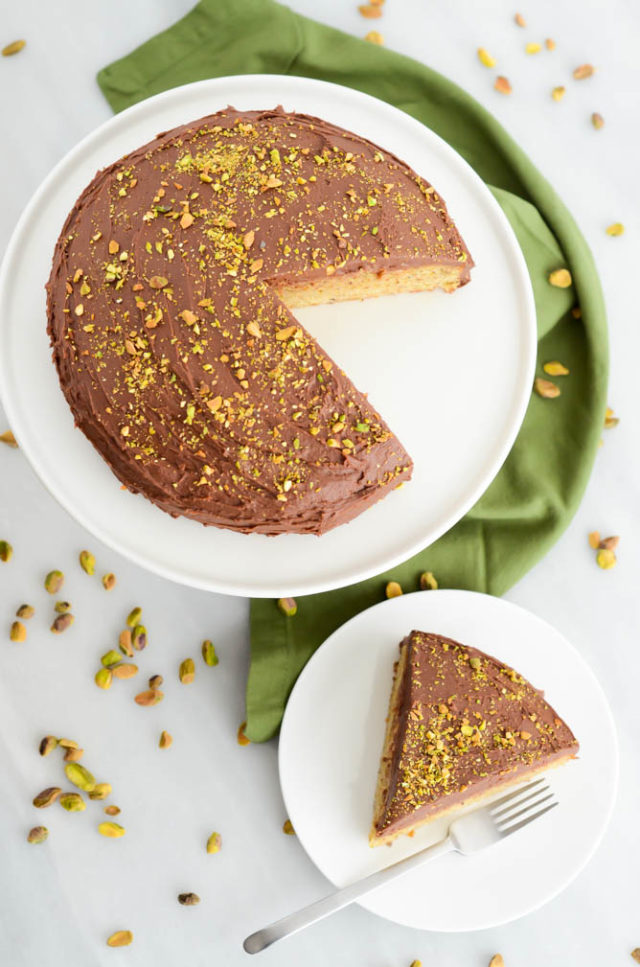 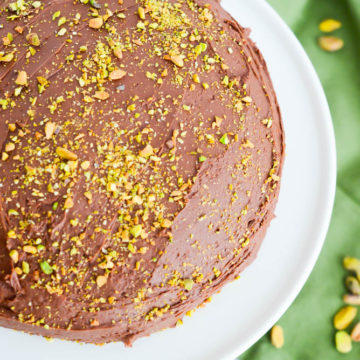