I think it’s been a little too long since we’ve talked about bourbon. 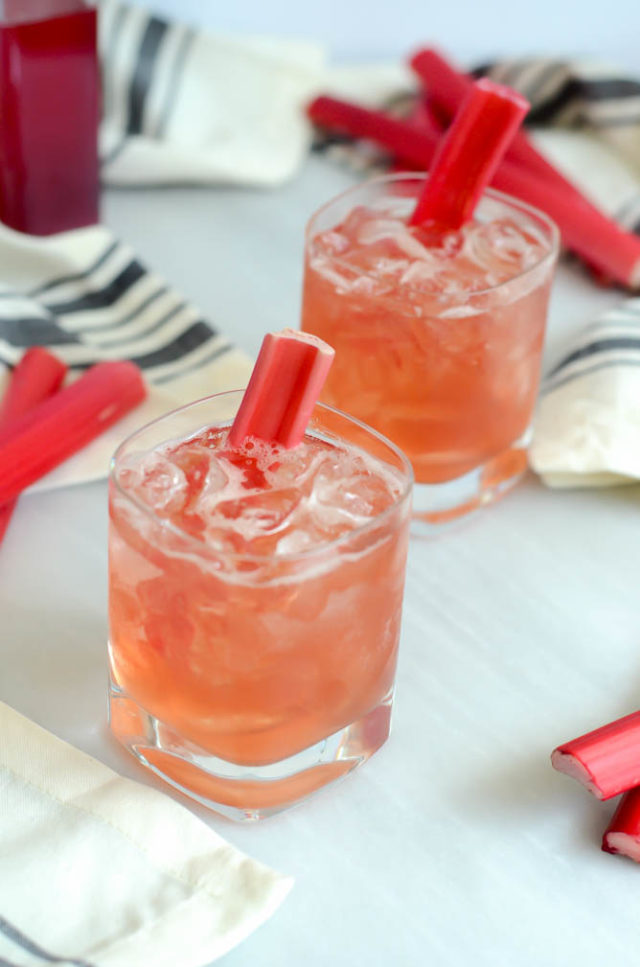 It’s also been a little too long since I’ve been able to get fresh rhubarb at the grocery store, so you can imagine how beyond stoked I was to find those bright red, crunchy stalks sticking out of a bin in the produce department of my local haunt. I knew I needed to make a rhubarb cocktail STAT and to me, the only answer was a Rhubarb Old-Fashioned!

Although you can technically eat the stalks of rhubarb raw (just don’t eat the poisonous leaves,) I find it much more enjoyable when it’s roasted or cooked in some way. If you subscribe to my email list (which you absolutely should!) you got another nice little rhubarb surprise recipe in your inbox earlier this week that features roasted rhubarb and strawberries, one of my favorite combinations.

But for today’s cocktail recipe, I decided to really let rhubarb have its time in the spotlight and whipped up a super-easy pure rhubarb simple syrup. Not only does it add the perfect sweetness to this Rhubarb Old-Fashioned, it gives it an amazing ruby red color! And aside from this special sauce, you’ll only need two other ingredients plus ice. How’s that for a TGIF? 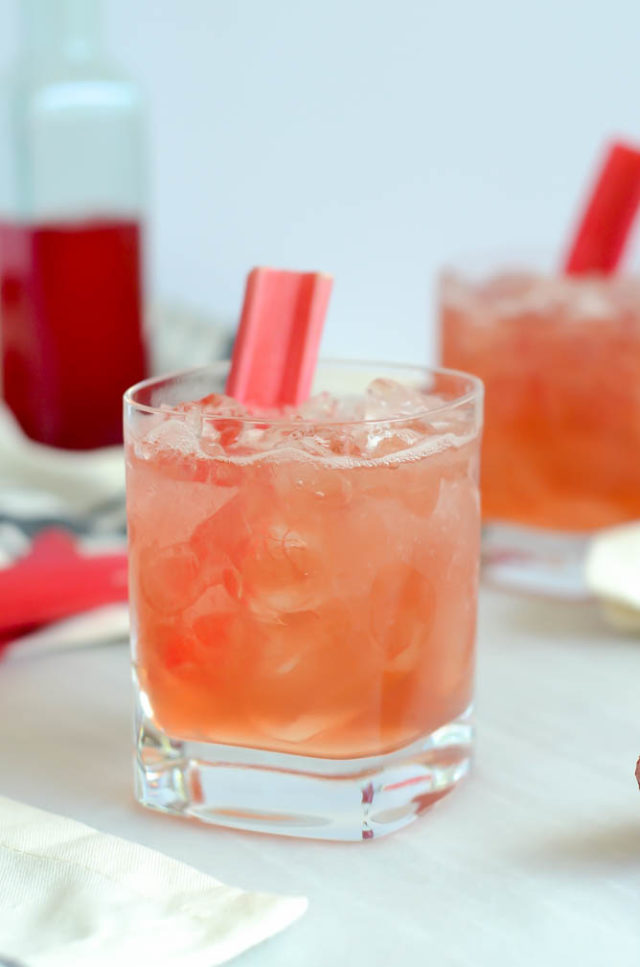 Speaking of Friday, what’s everyone up to this weekend? The hubs and I are taking it easy and starting to get ready for our big trip to Italy next week. That’s right, we’re jetting off to Tuscany with BOTH of our parents and my aunt for a fun, wine- and food-filled trip.

For the first leg of our trip we’ll be staying at a villa I stayed at with my aunt a few years ago, and then we’ll spend our last few days in a charming apartment right in the middle of Venice. It will be the hubby’s first trip to Europe and I am so excited to show him everything I love about Italy. We’ll be trying to squeeze a lot into our ten days there, but if anyone has any recommendations for Florence or Venice, please send them my way!

And don’t worry, I’ve got lots of fun recipes lined up to keep you entertained while we’re away!

So in the midst of all our packing, errand-running and organizing, you can bet we’ll be trying to use up that batch of rhubarb simple syrup with a few of these Rhubarb Old-Fashioned’s. They’re actually the perfect beverage for a relaxing weekend at home, especially this time of year. We’re getting a little more rain right now, but we certainly don’t mind as we still need as much as we can get and we’ve been having plenty of beautiful-weather days in between. 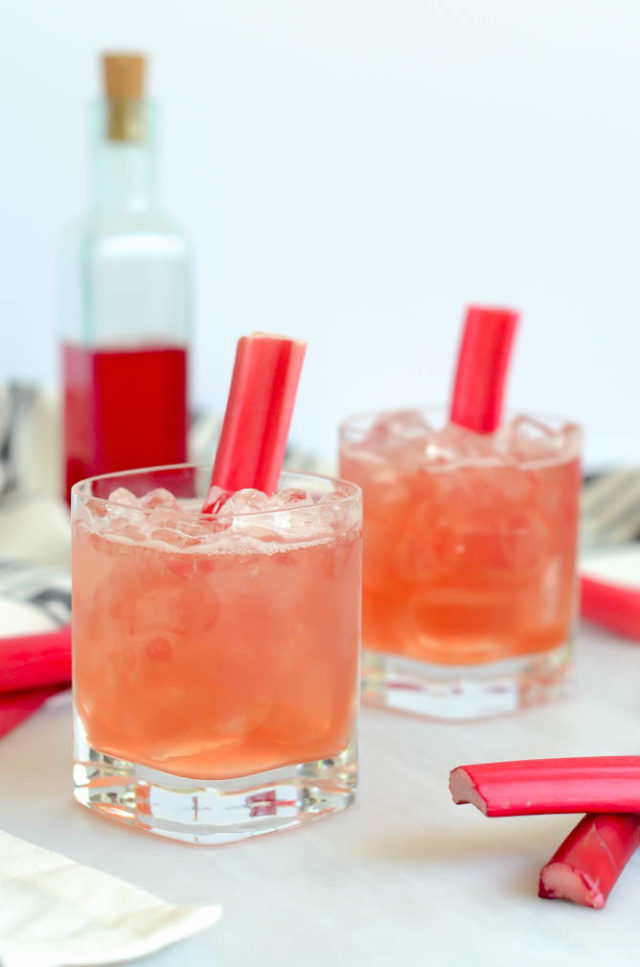 Anywho, I mentioned that you’re only going to need two other ingredients besides the rhubarb simple syrup. These ingredients are the basics of any old-fashioned: bourbon and bitters! It’s seriously as simple as that.

And the rhubarb simple syrup comes together so quickly and painlessly, you can easily whip it up as soon as you get home from work today. You’ll use the requisite equal parts water and sugar that you use in any simple syrup, and throw them in a saucepan with your chopped rhubarb stalk. Let this all boil away until the rhubarb has broken down and turned the mixture bright red, and the syrup has reduced to about half of its starting amount.

Strain the mixture through a sieve to get out all of the chunks of rhubarb, and you’re left with a magnificent red syrup that you may want to use in more dishes than just a cocktail (ice cream topping, anyone?)

The hardest part will be allowing the syrup to cool a bit before adding it to the cocktail, but feel free to expedite this in any way possible so you can enjoy a Rhubarb Old-Fashioned ASAP. 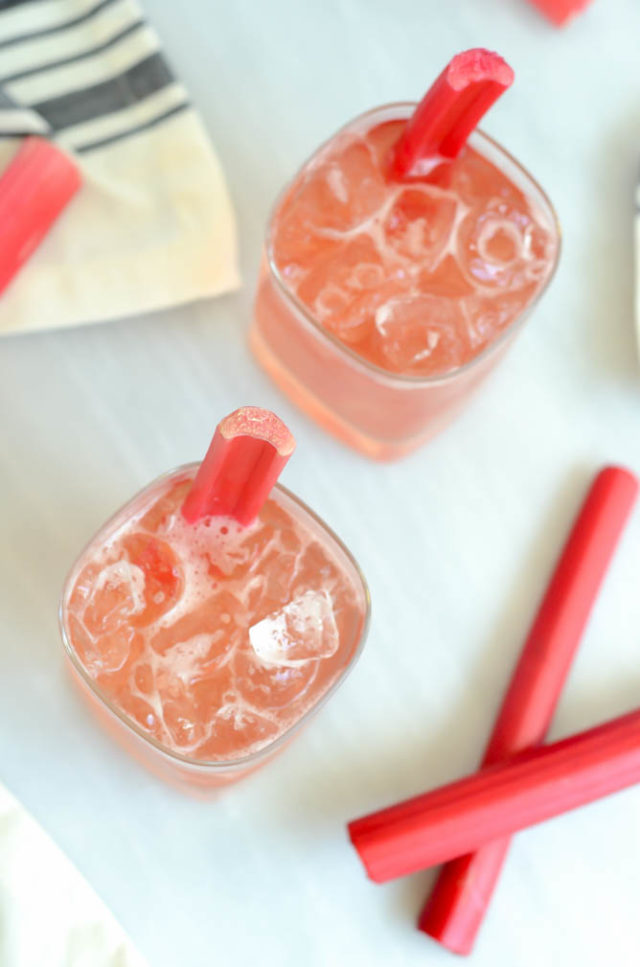 Whether you whip it up this weekend or wait until later in the spring, you’re going to want to make this perfectly seasonal drink sooner or later. And hey, in my opinion, there’s no time like the present! 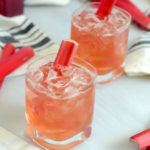 The classic bourbon cocktail gets a spring makeover with the addition of rhubarb simple syrup. Tastes good and a beautiful color to boot!