Because isn’t it absolutely necessary to have a mimosa for every season? 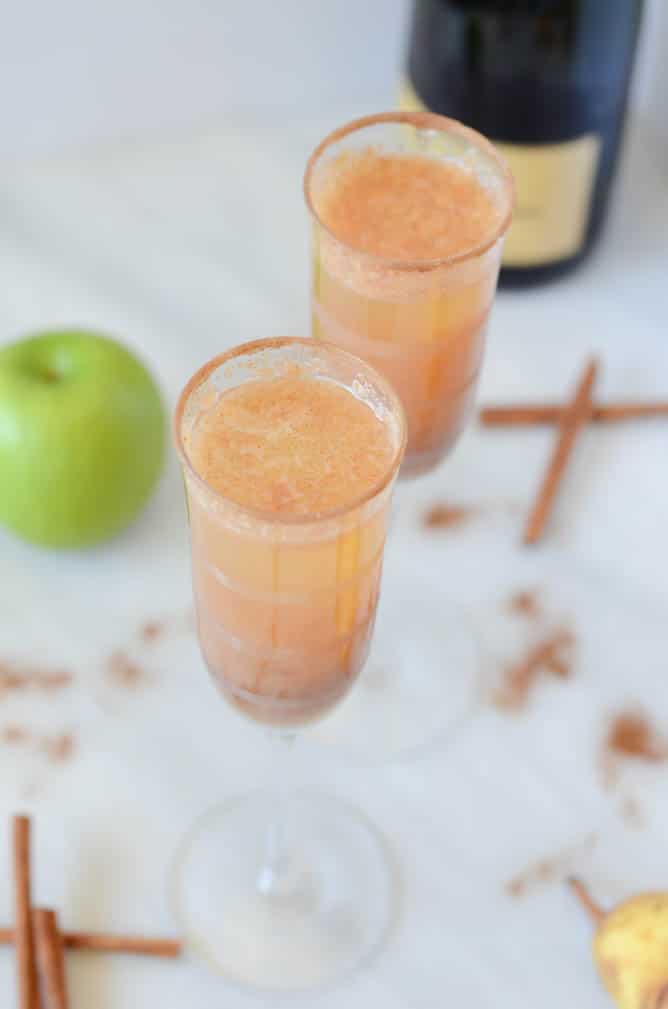 I certainly think so, and if you’re not in the same boat, well, maybe you should stop right here. This Harvest Mimosa is life-changing and the only way you’ll want to “mimosa” every weekend from here until New Year’s Day. And yes, I did just turn the word “mimosa” into a verb because it’s most definitely a thing.

Here’s the deal: I consider myself a mimosa expert (I’ve had lots of practice) and take great pride in attaining the perfect sparkling wine to orange juice ratio (see below.) However, when the fall and winter months roll around, I find myself craving something just a little more festive and out of the ordinary. There’s so much to celebrate at this time of year, one just cannot settle for a regular ol’ mimosa! 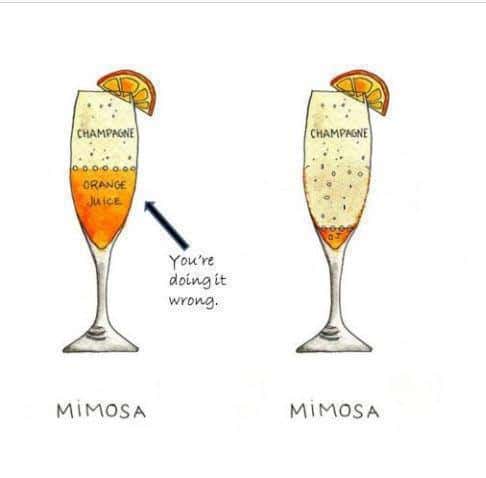 Last year around this time, I shared my OG “spooky” sparkling wine cocktail, the Lychee Lightening, so it’s about time I hit you with another great seasonal bubbly drink that can not only ALSO be enjoyed for Halloween, but Thanksgiving, Christmas, New Year’s, and every occasion (special or not) in between.

We are, in fact, in a celebratory mode this weekend. We’re headed to the hubs’ parent’s house for a family barbecue, where I’ll get to meet a lot of the extended family that couldn’t make it to our wedding. It’s an open house of sorts, a time to casually get to know and catch up with those we haven’t gotten to yet. The wedding was such a whirlwind and went by so quickly, if any of you are getting married soon I HIGHLY recommend planning some “extracurricular” activities shortly after the big day (even if it’s not the same weekend) to really have the opportunity to spend time with everyone. Definitely do not count on getting to do so at the big event, because it’s over in an instant and you are “on” from sunrise ‘til the stroke of midnight. Trust me.

We’re also celebrating my mother-in-law’s birthday this weekend, which makes it even more of a worthy occasion for us to enjoy some Harvest Mimosas. My MIL loves her sparkling wine and is always asking me for my latest and greatest recipes. I’m positive that she’s going to LOVE this one, which means we better make a run to the store and stock up on the bubbly. 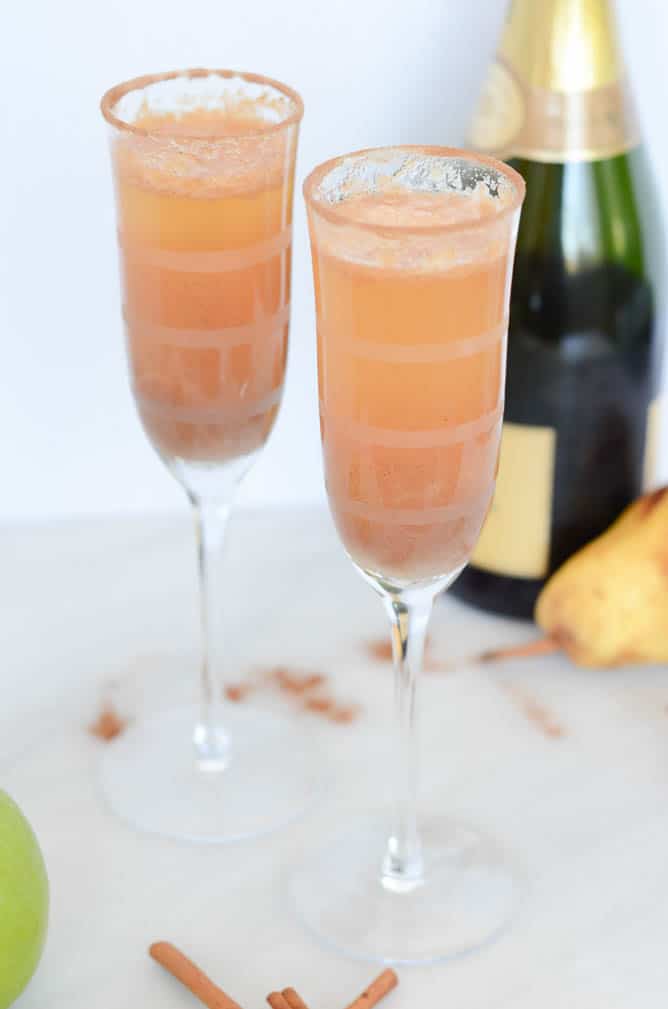 So enough about me and what I’m up to this weekend, let’s get down to the real business at hand: why YOU are going to love this Harvest Mimosa just as much as I do.

First things first, we’re making a fresh pear puree laced with vanilla and cinnamon. The thing I love about pears is that (when ripe) they’re soft and juicy enough to just puree in a blender and run through a sieve. No need for a fancy juicer (which I don’t even have.) I went for fresh pear puree, although a pear nectar/juice would work just fine. You’ll just want to add in a hint of cinnamon to get the real “harvest-y” flavor that’s key in this drink.

That’s it! Super easy, huh? This Harvest Mimosa literally tastes like fall in a glass. It transports you to every apple-picking, pumpkin patch adventure you’ve ever been on, without even leaving your house. It’s cinnamon-y, fruity, and has just the right amount of kick to warm you from the inside out. 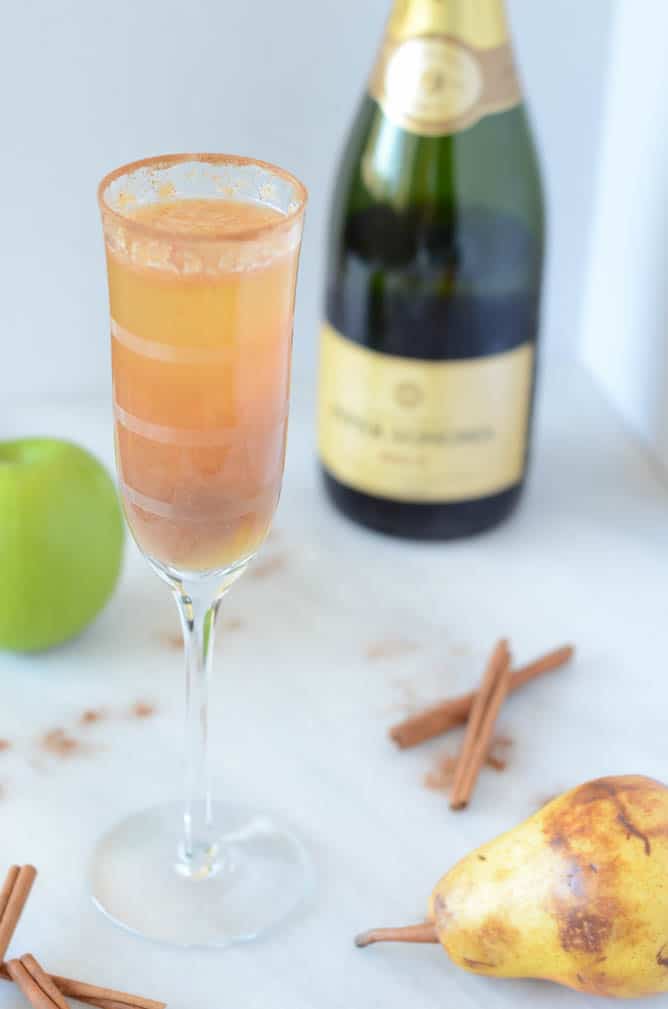 I don’t know about you, but I’m not sure I’m even going to wait until 5 o’clock to make this one…

Happy Friday friends! I hope you have a great weekend! 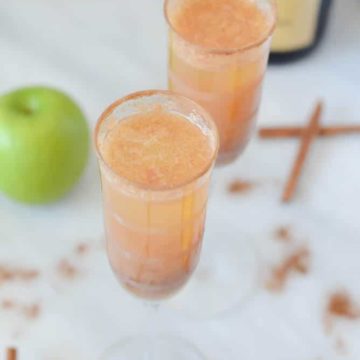 For the pear puree (this will give you about 2 cups puree total):

For the Harvest Mimosa:

To make the pear puree:

To make the Harvest Mimosa:

Which way to the pumpkin patch?