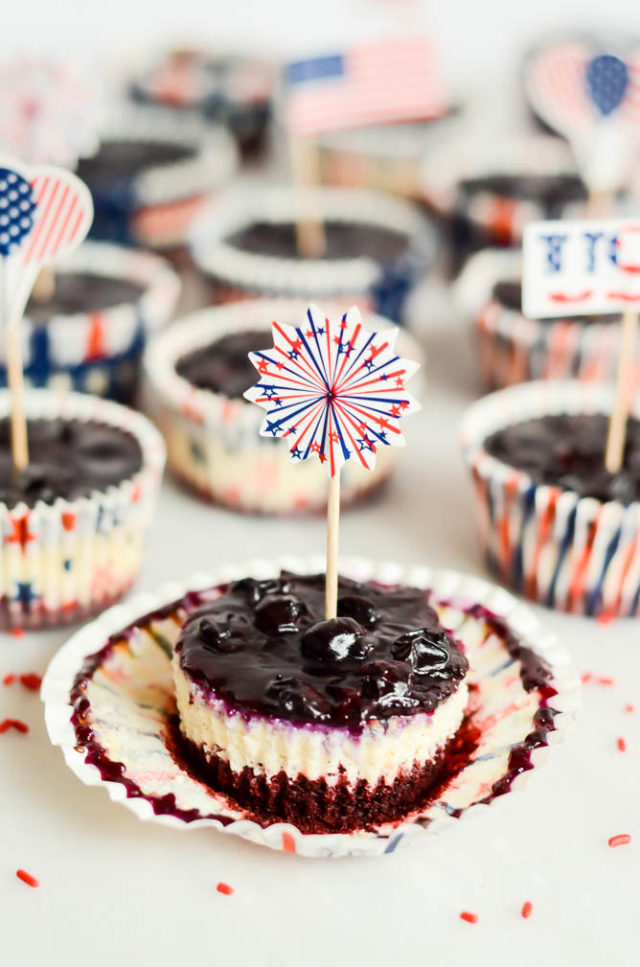 Let’s be real, I’m pretty dang excited to tell you about these little bites of heaven. After all, how often do you get the taste of rich red velvet brownies, creamy cheesecake and refreshing blueberry compote all in the size of a cupcake? Not very often, I’m betting.

I’m not gonna lie, these Patriotic Cheesecake Bites were a labor of love. In fact, I didn’t even attempt to photograph them the first time around because I knew it would be a recipe that needed a lot of refining. Well, I’m happy to say that my hard work paid off, and now I have delicious layered cheesecake bites to tell you all about! 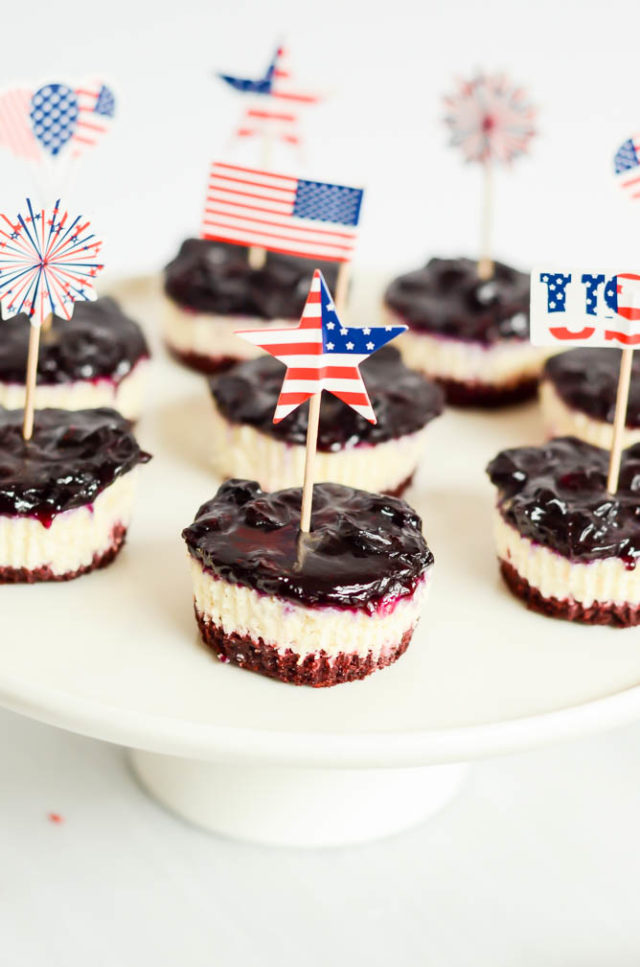 But first, tell me what you all are doing to celebrate 4th of July?? Did you take today off so you could have a four day weekend? Or are you stuck at your desk today madly trying to get things done so you can cut out of work early and TGIF the heck out of Monday?

The hubs and I had a nice relaxing weekend at home, full of lots of time out in the sun enjoying some beach volleyball and, as we do every weekend, cooking up oh so many delicious things! I made cinnamon rolls on Saturday morning and Sunday morning I finished up the cheesecake bites. Last night the hubs smoked up a tri tip after we did a little new car research, since we’re hoping to upgrade before baby comes in October. Right now we’re looking at either a 2017 Subaru Forester (I currently drive a 2010) or Honda Pilot. Any thoughts/input are welcome!! 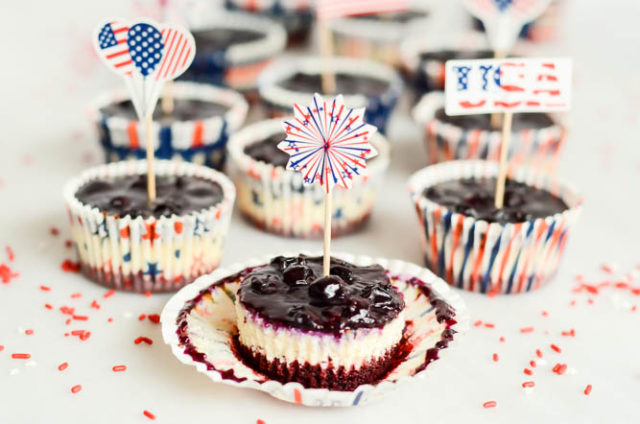 We also leave for our babymoon in a week and a half (Kauai, here we come!) so unfortunately neither of us was able to take today off of work, but we’re definitely planning on relaxing with some beach time, friends and more delicious food tomorrow. I can hardly wait. I think every week should only be a four-day work week.

Okay, but I digress, and I need to keep this fairly short because I’ve got things to do and relaxing to commence. Let’s talk about these Patriotic Cheesecake Bites. 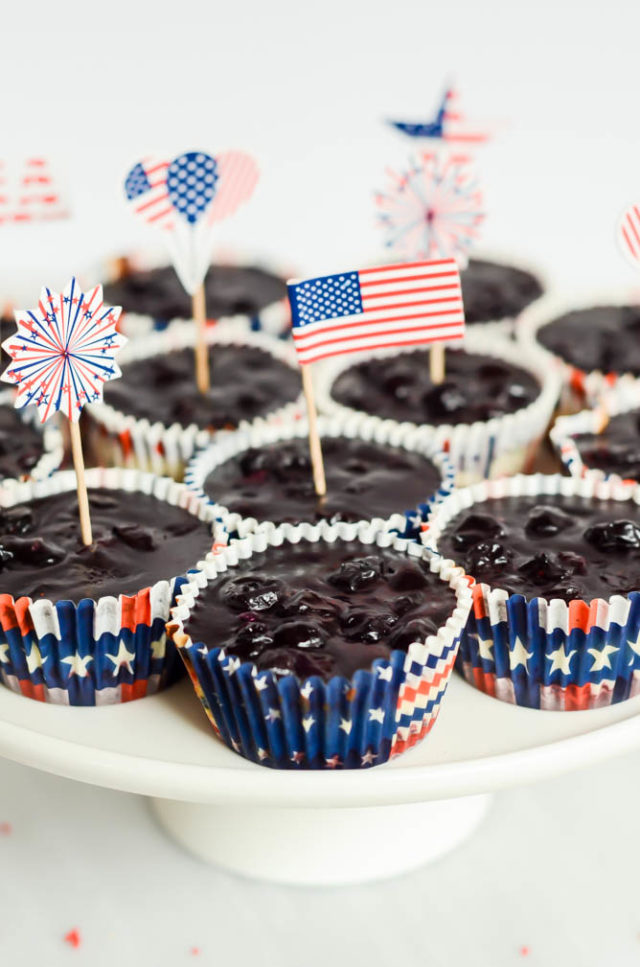 They’re a little more time-consuming than just-your-average cupcake, but not nearly as bad as whipping up an entire full-size cheesecake. There are three layers, so three main steps to the process, but none of them takes very long because we’re talking cupcake-size portions.

The first layer is a rich, chocolate-y red velvet brownie. I’m the first to admit that I’m a BIG chocolate-lover, so this layer came out more of a darker red than a bright, vibrant red, but trust me, the extra chocolate flavor is worth it.

The second layer is a classic cheesecake, which I based off of my Classic New York-Style Cheesecake I made a while back. The great news is that for these Patriotic Cheesecake Bites we don’t need to worry about the hassle of a water bath, and they cook sooooo much quicker. 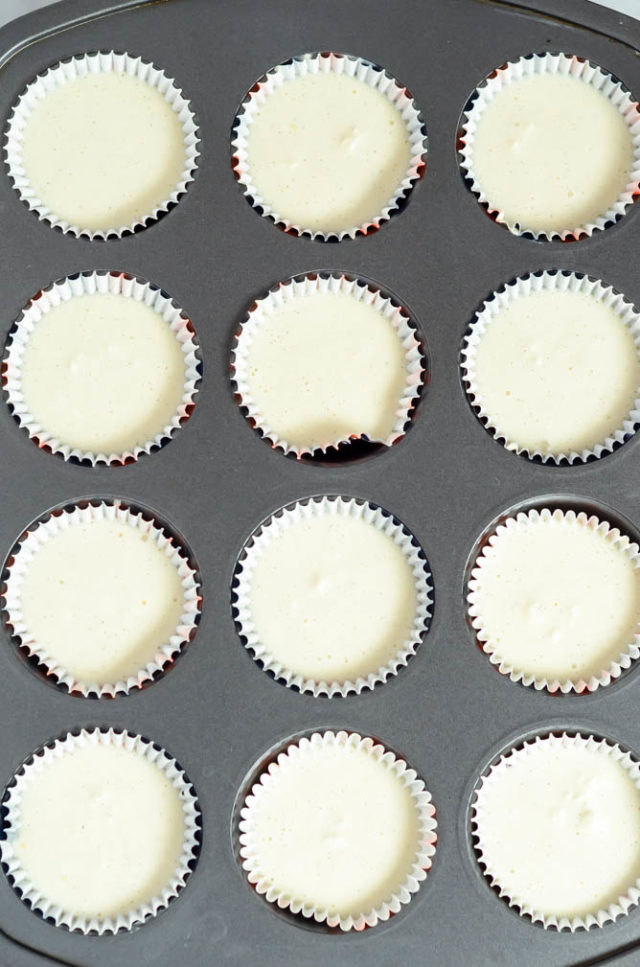 The third and final layer is a fresh blueberry compote. You guys, this is the proverbial “icing on the cake.” I based my recipe off of this one from Martha Stewart, and added in a little gelatin to make sure the compote set enough to eventually peel off the cupcake liners and reveal the festive red, white and blue layers. 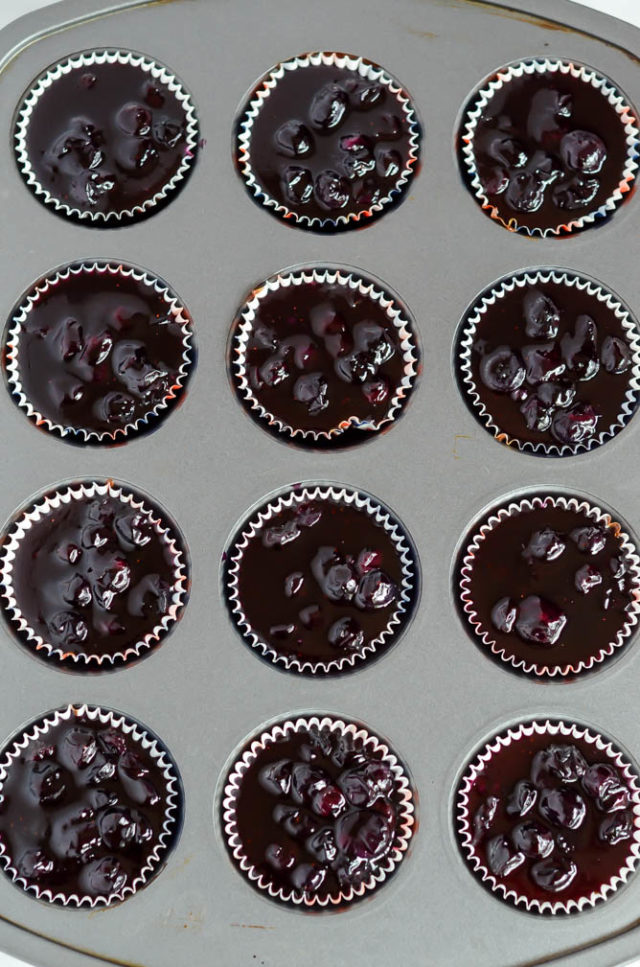 That’s it! So easy. The first time I made these, I tried making them in my mini cheesecake pan, but even with a generous coating of cooking spray they stuck quite a bit and were hard to pop out. The next time around, I decided to go with a classic cupcake pan with liners (I used these fun Fourth of July ones from Amazon!) and that turned out to be soooo much easier. If you don’t want things to get too messy, you can serve the bites right in the wrappers, or if you want people to really see why you call these “Patriotic Cheesecake Bites,” peel off the papers to reveal the surprise. 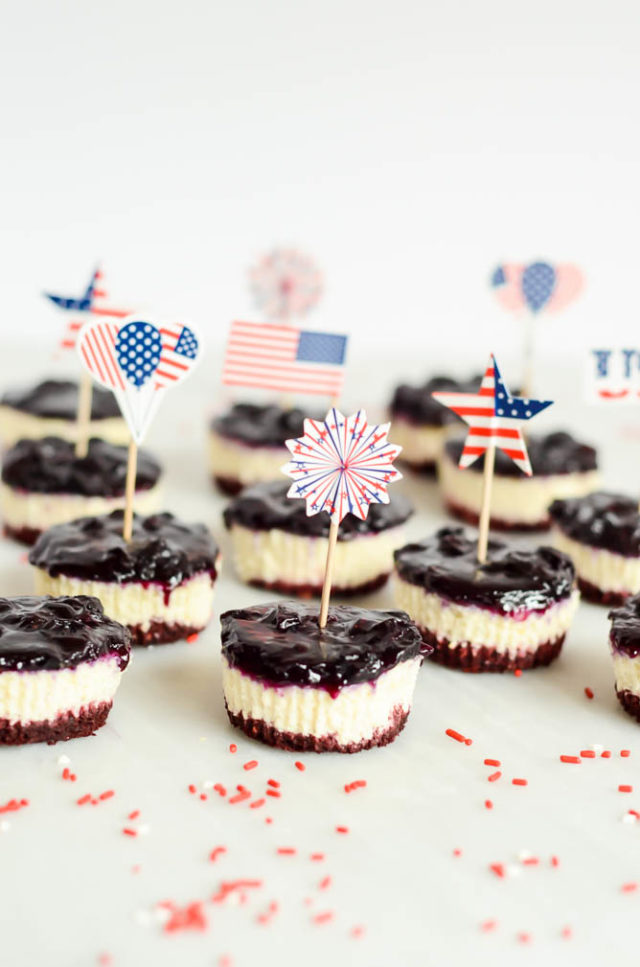 So what do you think? Have I motivated you yet to try these out tomorrow? Better yet, get them started and into the refrigerator tonight, and you won’t have to spend any time in the kitchen tomorrow. More time to enjoy sunshine and good friends! 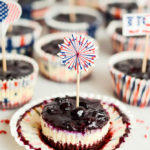 These individually-sized festive bites feature layers of red velvet brownie, classic cheesecake and blueberry compote to make the perfect treat for the Fourth of July! 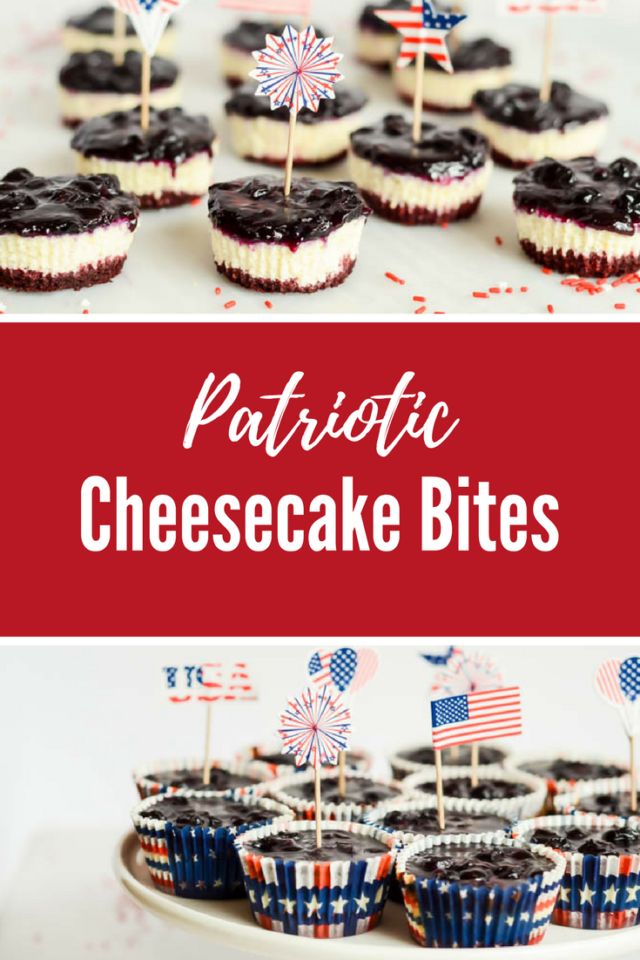 One thought on “Patriotic Cheesecake Bites”